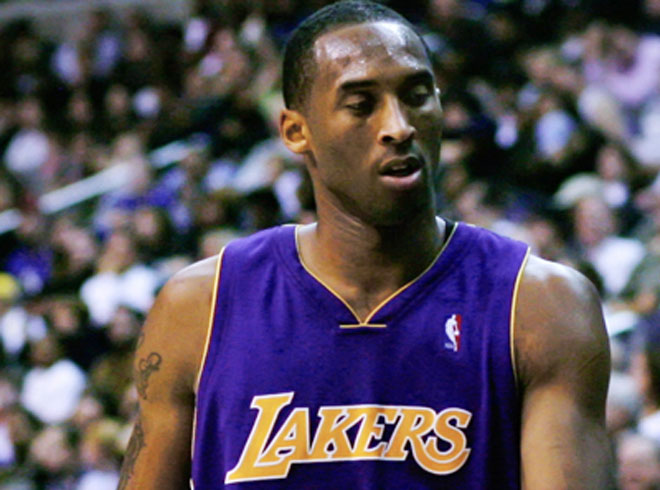 The Vino keeps getting better and better. During Saturday night’s road game against the Sacramento Kings, Kobe Bryant surpassed Wilt Chamberlain as the fourth all-time leading scorer in the NBA, notching point numbers 31,420 and 31,421 with a pull-up jumper over Sacramento’s John Salmons. Ahead of him on that list is Michael Jordan, who holds third place with 32,292 points, Karl Malone, who scored 36,928, and Kareem Abdul-Jabbar, who reigns supreme with an astronomical 38,387.

If only Bryant’s efficient but single-handed output were enough to carry the Lakers. Despite his weekend achievement, the team nearly lost to Sacramento, one of the worst in the West (they eked out a win, 103-98), and the squad is still scrambling for the eighth playoff seed in a three-legged race with Utah (38-36) and Dallas (36-37). What’s more, the Lakers have the fourth toughest schedule remaining according to ESPN stats. Yes, the Lakers are tapping into Howard, Bryant, and Gasol, but with Nash on the repair with some back and hammy issues, these final bouts look dicey. The Lakers will take on Dallas, Memphis, the Clippers, New Orleans, Portland, Golden State, San Antonio, and Houston—and none of these match-ups are sure to be lock-’em-down wins. Fortunately, six of the games are at home (seven, if you count the one against the Clippers).

The situation makes Bryant, who has been hobbling thanks to that nasty mid-March ankle sprain, something of an underdog, despite how hot he’s running right now. I think he’s thriving on it, though. The Twitterverse sure is.

Up next: Bryant and Co. host the Dallas Mavericks at the Staples Center on Tuesday night at 7:30 p.m.