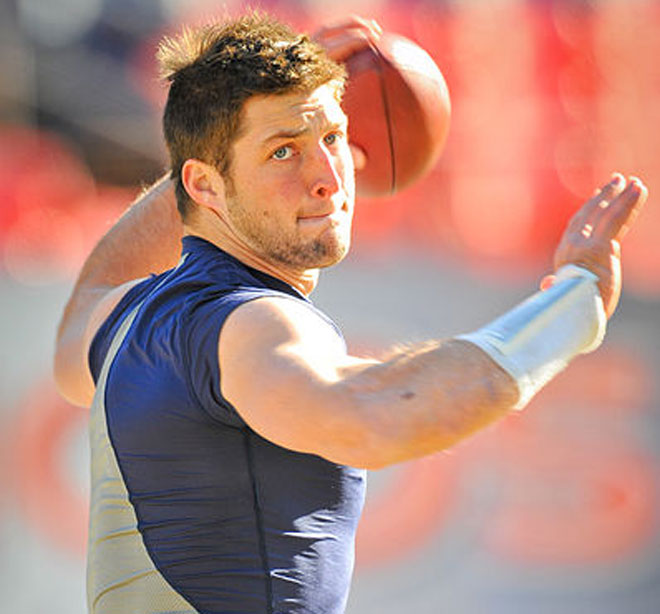 Los Angeles could be shouting out loud very soon.

Team co-owner and KISS bassist Gene Simmons called the quarterback’s play “exciting,” saying it has the ability to send “shockwaves through the League.” While NFL fans across the nation shake their head in disagreement and sip cold gin to cope with the post-Tebow stress, we explore why the former Florida quarterback should consider the offer, worth potentially millions, from “The Demon:”

1. Hey, it’s football
Playing for the L.A. KISS, while not exactly glamorous, allows Tim Tebow to be something he wasn’t as an NFL player: employed. If he wants a chance to play quarterback, and not tight end or fullback, here it is. For the next three years, Tebow, a Heisman-winning QB in college, could dominate the league and even earn a look from NFL teams. But even if the gig doesn’t yield an NFL job, it certainly beats staring at the phone for 100,000 years and waiting for teams to call.

2. Local Football Stardom
Last I checked, Los Angeles hasn’t had a football team since 1994. The L.A. Avengers certainly aren’t an arena team anymore, meaning the L.A. KISS is the sole revenue-earning football team within an hour-and-a-half of downtown Los Angeles. The only two teams that could be worth rooting for as Angelenos in the future are the Raiders and the Chargers, but neither will be eligible for a transfer until at least next year, when their current stadium contracts expire. Also, the Trojans, normally the No. 1 football team in Los Angeles, are just far and terrible enough this season to not make the KISS the No. 2, or deuce, team in the city.

3. It’s Tebow Time
Skill level aside, the question needs to be asked: How many other professional athletes have a body position named after them? Aside from maybe Tom Brady, none. Tim Tebow has a career completion percentage below 50 percent, yet his moral and spiritual antics have captured the hearts of fans across the nation, albeit some in jest. During the summer of 2012, Tim Tebow’s jersey experienced the third-best sales success in the league behind perennial pro-bowler Peyton Manning and rookie superstar Robert Griffin III. Sure, the clashing of the hedonistic KISS and the saintly Tebow could result in a bit of mixed messaging come the start of the Arena Football League season, but it’s a dichotomy that could bring fans to the Honda Center.

So far, there has been no word from Tebow as to his interest in pursuing a career in a secondary league like the AFL. For now, the offer to rock and roll all night in Anaheim remains on the table. We hope he puts pen to paper sometime soon.