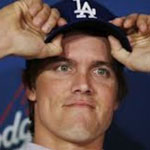 On Apr. 12, Zack Greinke reared back for a 3-2 pitch and let a fastball fly. He didn’t know it, but it would be his last in-game pitch for nearly a month.

With his team up a single run in the sixth inning—hardly a plunking situation—the payoff pitch drilled Padres outfielder Carlos Quentin in the left elbow, and after a short back-and-forth, Quentin charged the mound, a bull looking for blue.

The 240-pound outfielder ran full-speed into Greinke, who lowered his shoulder like a tailback entering the hole in an effort to absorb the hit. He was all too successful, jarring his bones enough upon impact to find himself with a broken left collarbone, an injury that ended up keeping him out of the game until mid May.

While out on disability, Greinke worked his way up to peak strength, readying himself for his return. After a few rough outings, and an additional brawl on June 11 against the Diamondbacks (hey, he still pitched well), the Dodgers’ six-year, $159-million man was ready to explode.

Sandwiched between Clayton Kershaw—the second coming of Sandy Koufax—and Korean sensation Hyun-Jin Ryu, Greinke flipped the script on what could have been a tragic season for him, and has lost just two starts in June, July, and August combined.

His accomplishments this year include an undefeated August in which he pitched 36 and two-thirds innings in just five starts to compile a 1.23 ERA, the kind of month Astros fans must dream about.

I almost forgot: I’m talking about the National League, so there’s a whole other side of Greinke to brag about.

While he only makes appearances at the dish every fifth day, a sad truth that has left Greinke with just 49 at-bats, the right-hander is hitting an eye-popping .347, with 17 hits to his credit. On top of that, he has struck out just six times in his 24 games on the mound, a low number for a position commonly filled by defenseless hitters.

One of very few bummers associated with Greinke right now is that there’s only so much of him left. Win or lose, the 14-game winner will probably only pitch four more times this season, possibly less if the Dodgers clinch early—which they will; as of last night, their magic number of Ws plus Arizona losses needed to score a playoff berth was just 12.

In the post-season, the 29 year-old could be one of the catalysts behind a late-October celebration in Los Angeles. He and his pitching-mates are a fearsome five, and the numbers show it. With a league-leading 3.09 ERA among starters, the Dodgers’ rotation has continued to pay dividends, pitching deep into ball games almost every night.

I’ll knock on a Louisville Slugger as I predict the fall classic being the expectation for Greinke, Kershaw, and the gang. With the NL West title nearly in hand, a strong focus for all three should just be staying healthy. When the Dodgers visit the Padres Sept. 20-22, Greinke may want to pitch Carlos Quentin outside.