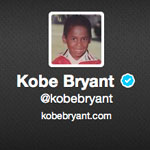 The 2013 NBA Playoffs are in full swing, and both L.A. teams are already making noise—unfortunately, just not for the same reasons. While the Clippers are basking in the limelight of Chris Paul’s last-second game winner (and a 2-0 series lead over the Memphis Grizzlies), Kobe Bryant’s Twitter coaching has stepped up as the Lakers story of the week.

Game one of the Lakers-Spurs series took place on Sunday, and Bryant, watching from home, sent advice, criticism, and observations in the form of tweets more than a dozen times. Bryant, who can’t be on the bench or travel yet because of his Achilles injury, activated his Twitter account on January 4 of this year and already has more than 2.2 million followers and a tweet count upward of 460. Throughout the game, Bryant stressed utilizing Dwight Howard and Pau Gasol on offense and stepping up on defense—especially against antagonist Tony Parker. Coach Mike D’Antoni and Co., however, were unable to deliver on either of Mamba’s requests; the team fell to the Spurs 91-79. After the game, D’Antoni commented on Bryant’s live-tweeting. “He’s a fan,” he said, “and you guys put a little more importance on that kind of fan. But he’s a fan. He gets excited and he wants to be a part of it so that’s good.”

Needless to say, Bryant wasn’t a huge fan of being called a fan. Here’s a look at his reaction and some of his other Game One tweets: The 17-year NBA vet, who will be on hiatus for six-to-nine months because of his injury, has vowed not to live-tweet Game Two but plans to attend Staples for games three and four. It seems he’s taking a quieter sideline coaching strategy—but we’ll have to wait and see what happens tomorrow. Former Lakers coach and Zen Master Phil Jackson, who is also fairly new to Twitter, had some words of solace for Bryant:

Though it might be awkward—and probably annoying—for D’Antoni, Jackson’s advice is spot-on. Is a road win feasible for this Lakers squad, though? The Twitterverse is biting its nails already, patientily awaiting the wrath of #FanMamba.