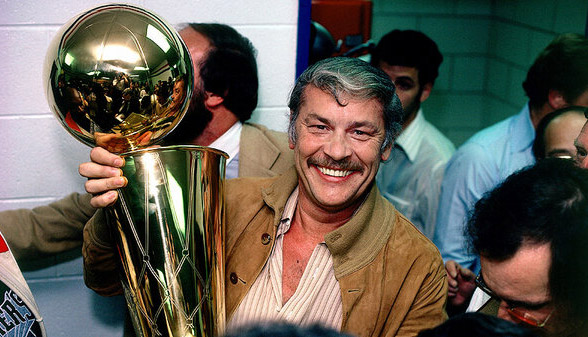 The Purple and Gold—and Angelenos—mourn today the death of Jerry Buss, longtime owner and face of the championship-studded Lakers franchise. Spokesman Bob Steiner said Buss died this morning at L.A.’s Cedars-Sinai Medical Center, where he had been hospitalized for cancer—although the immediate cause of death was noted as kidney failure. Buss, who was known for his love of partying, winning, and relishing life, transformed the Lakers into one of the most winningest and glitziest teams in sports history. He brought a swath of NBA titles to the city, stars in the form of Magic Johnson, Shaquille O’Neal, and Kobe Bryant, and other boundary-pushing changes that would launch L.A’s sports dynasty. The Wyoming-born Buss accomplished a laundry list of feats during his 32-year career. Here are our top four:

1. He Made L.A. the Stuff of Legend
During his three decade run at the helm of the Lakers, Buss brought a total of ten championship banners to the city: five during the Showtime dynasty of the ’80s and another five in an 11-year Black Mamba run. Under Buss’ leadership the Lakers made the NBA Finals 16 times—and the Lakers are still easily one of the NBA’s most victorious teams, with a total of 16 championships, second only to the 17 earned by the Boston Celtics.

2. He Built An All-Star Court
The Lakers would be nothing without their historic lineups of legendary playmakers—but that all started at the top, with Buss. The Purple and Gold essentially became an extension of Hollywood glamour, after Buss spent lavishly to balance costly players (like Magic Johnson) with high-profile honchos in the form of coaches Pat Riley and the Zen Master Phil Jackson. Buss added to the Lakers’ payroll even though the NBA had put penalties on large payrolls—and happily paid luxury taxes.

3. He Turned Cheerleaders Into a Main Event
The Lakers’ owner was a huge fan of the entertainment aspect his team held. Long before dancing and mid-court shows were a league standard, Buss introduced the Laker Girls, who made games more than a sporting event with their pizzazz, show(wo)manship, and ass-kicking dance moves.

4. He Rebooted Sports on TV
Innovation always on his mind, Buss also led efforts to change televised sports by co-founding in 1985 the Prime Ticket network, which broke the contemporary model of subscription services and put Chick Hearn and Lakers home games on basic cable.

Here are some more feats of the late Lakers legend, as well as some reactions from across the Twitterverse: