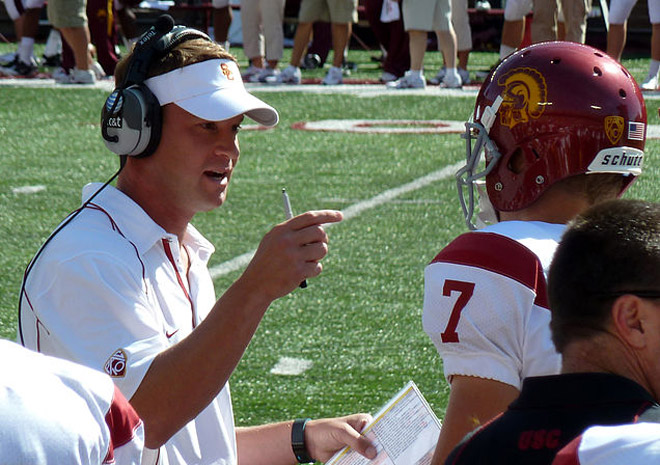 Visor salesmen all over the Los Angeles area, commence panic mode. Your most high-profile customer, Lane Kiffin, is now out at USC and jobless for the foreseeable future.

The decision, according to USC Athletic Director Pat Haden, was made during the third quarter of a 62-41 Trojans loss in Tempe in which Arizona State outscored USC 28-0 during an 11-minute stretch.

What’s worse is the way it was handed down. With the whole team reeling from the loss to Arizona late Saturday night, the Trojans boarded a bus at LAX, ready to head back to USC’s campus and get some sleep. Then, just as the bus was about to leave, Haden pulled Kiffin off to have a word and did his best Ty Pennington impression, telling the bus driver to get a move on to campus.

The two reportedly chatted for the better part of an hour, with Kiffin apparently pleading for his job, trying to convince Haden to give him another shot. In the end, though, his attempts were futile. It has been determined that America’s favorite Daniel Tosh lookalike will be replaced by former Ole Miss head coach and USC defensive line coach Ed Orgeron.

If Saturday night’s game was the final stage in an ongoing interview process, then Kiffin showed up Saturday night without his suit and tie and poor references. The Trojans’ highly-touted defense (at least it is more highly-touted than its abysmal offense) was torched for 612 yards, letting a team that was manhandled just a week before by Stanford have its way on land and through the air.

I feel for Kiffin. USC was his dream employer, a school he helped coach to NCAA title games back in the early 2000s and one that he thought had the personnel to reach the promised land once again. He even left Tennessee—a historic SEC program with plenty of booster money—high and dry to come to Los Angeles and adequately fill the shoes of Seattle Seahawks coach Pete Caroll in 2009 .

Now, he’ll likely be a position coach somewhere far away from L.A. while the Trojans are fixing to put up millions to hire his replacement.  Texas A&M’s Kevin Sumlin, Vanderbilt’s James Franklin and the Denver Broncos’ Jack Del Rio, a defensive coordinator of an undefeated team, have been named as possible candidates. The question has to be asked though: Are the job security risk and the pressure of high expectations worth the king’s ransom being offered?

Right out of the gate, the remainder of this season is as lost as pocket change in a couch cushion. The Trojans still have to play a somewhat-talented Notre Dame team in South Bend, a Stanford squad that will be contending for a national title and a No. 13 UCLA team that looks to have finally surpassed its crosstown rival for the time being.

I’m not claiming to have called the fall of Troy, either. If you recall, I predicted this team would win ten games, and if this rough stretch continues, I’ll look like a complete fool by the first week of November.

Despite the rocky 3-2 start, USC still boasts an impressive fan base, venue, and workout facilities—and the history of one of the nation’s most historic programs, to boot. They’ve had success before, and they’ll have it again. When that happens depends largely on who steps in to Kiffin’s shoes.