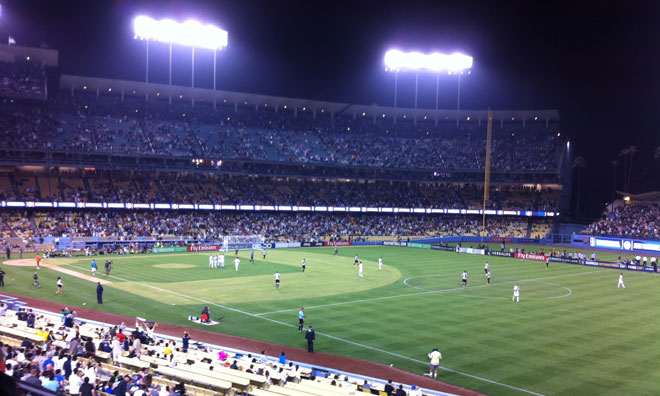 On Wednesday, Real Madrid striker Cristiano Ronaldo threw out the first pitch at the Dodgers’ game, the team’s final match up of a six-game home stand. The result wasn’t pretty. The 28-year-old airmailed his first throw. He hit the mitt of Dodgers right fielder Yasiel Puig on his second try.

Three days later, Ronaldo mastered a different pitch when Dodger Stadium was transformed into a fully serviceable soccer field—a first in its 51 years of existence.

Wasting no time to redeem himself, Ronaldo quickly broke past an Everton defender in the 17th minute of the stadium’s premier soccer match, lightly stepping to his right and tapping the ball in to beat goalkeeper Tim Howard and score the first goal.

The occasion: Guinness’s International Champions Cup, an eight-team exhibition tournament featuring some of the best teams from the English Premier League, MLS, Italy’s Serie A, and Spain’s “La Liga.”

Ronaldo’s Real Madrid took on the English Premier League’s Everton F.C. in the tournament’s semifinal match, the first game in a double-header, and advanced to the final with a 2-1 victory. Two-time defending MLS champion L.A. Galaxy and 2012-2013 Serie A champs Juventus F.C. faced off in the nightcap, a matchup of teams that had lost in the tournament’s first round, with the Galaxy knocking off the European powerhouse 3-1.

Sporting the fresh new haircut he gets before every single game, Ronaldo showed the 40,000-plus in attendance—including Howard, who also serves as a goalkeeper for Team U.S.A.—why his club, the nine-time UEFA Champions League winner, remains at the top of the sport.

“They’re a good team…they’re hard to contain,” said Howard of Real Madrid in the press hallway beneath Dodger Stadium after the first match. “You want to try to climb levels, and the way you do that is by putting yourself under pressure, and it’s fun to kind of challenge yourself.”

The evening’s second match remained tied at one until L.A. Galaxy forward Landon Donovan tapped in a crisp pass across the box from forward Robbie Keane in the 60th minute for the game-deciding goal.

For Donovan, a native of Redlands, Calif. who grew up a Dodger fan, the entire event proved somewhat surreal.

“For me personally, it’s quite the dream,” said Donovan, both in Spanish and English, to the media after the victory. “I used to get about an hour a night to watch TV and I would dedicate it to Dodger games. I’ve been at this stadium many times as a fan, so to get a chance as a player was pretty special.”

While Donovan said the match’s result should be taken lightly as it took place between a Juventus’ squad still in the middle of preseason play and a Galaxy squad in midseason form, the collection of talent, both domestic and foreign, on the pitch at Dodger Stadium Saturday night was undeniable.

A goalkeeper who has only started two goals for the Galaxy this season, former UCLA keeper Brian Rowe saw his performance between the pipes against one of those talented teams—Juventus—as a powerful learning experience, if not a dream come true.

“It definitely helps [my confidence],” Rowe said. “I mean playing these last two games against Real Madrid and this one against Juventus, you’re playing some of the top players in the world. They’re definitely fun games to play in, and you just try to learn what you can from it.”

How exactly did the Dodger Stadium grounds crew turn a baseball diamond into a soccer field for the event? It improvised to the best of its ability, matting the infield dirt with temporary grass and angling the rectangular field to achieve a standard width.

The effects of the makeshift grass patch were somewhat noticeable, with Juventus defender Andrea Barzagli slipping uncharacteristically on the bumpy stretch midway through the second half, which nearly lead to a goal for the Galaxy. However, for most players, including Keane, the different materials, setting, and collection of opposing fans amounted to soccer as usual.

“A field is a field,” said Keane, as he headed from the locker room to the stadium elevator. “Once you’re on a field, you forget what’s around you. I’m on the field so I don’t really look around me to see what’s going on.”