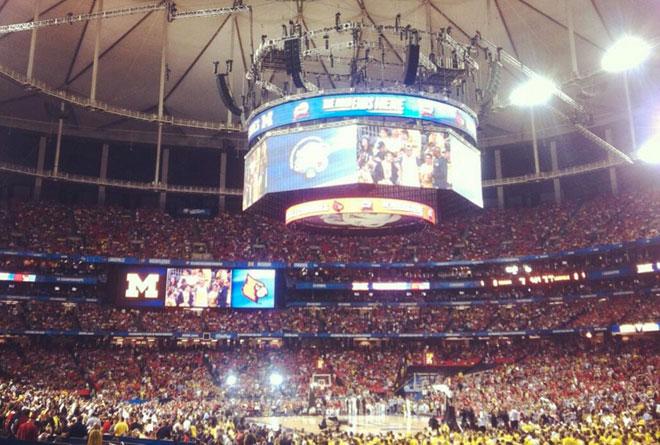 Maybe you stopped watching when you realized the Pac-12 didn’t stand a chance. Or maybe you stopped watching when Kansas and Duke bowed out. Or maybe—just maybe—you sat around for all of the Madness, even though your bracket was beyond busted. The Big East gets the last laugh this year, as Louisville outlasted Michigan 82-76 to nab the national championship. You could call it a win for Ware, the Luke Hancock phenomenon (he has the distinction of being the first sub to be named Most Outstanding Player), or whatever you want. The dance is done and now we have to look elsewhere for our sports highs. Luckily, some new seasons are starting and some old ones are culminating in what should be an exciting couple of months.

1. Let’s Hear it for the Ladies
If you can’t stomach the fact that March Madness is over, let me turn your attention to the Big Dance’s female counterpart: Louisville will square off against Connecticut for the women’s national championship tonight in New Orleans. The Cards are battling for college basketball supremacy, so you can bet men’s coach (and champion) Rick Pitino will be there. Unfortunately however, his team won’t—due to an NCAA rule. That doesn’t mean you can’t tune in.

2. Head to Chavez Ravine
America’s favorite pastime is in full-swing, and the boys in blue are gunning for a bounce-back season and some post-season redemption. At 4-2 the Dodgers are off to a good start, but they dropped the opening series against their rivals, the San Francisco Giants, 2-1. Most loyal fans have been stalking the pre-season numbers and pundit projections, but it’s not too late to get into baseball mode if you’re a bit behind.

3. The One-Man Vineyard
The Lakers (40-37) have only a handful of games left and (luckily) one more to play than the Utah Jazz (41-37), who right now hold the eighth Western Conference playoff seed. Some of the Lakers’ key players have been battling injuries throughout the season, causing team helmer Kobe Bryant to essentially turn himself into a one-man wrecking crew. From Steve Nash to Pau Gasol to Metta World Peace—who twelve days ago underwent surgery to repair a torn meniscus—the Lakers squad has underwhelmed and underperformed. It would be no surprise if the Purple and Gold didn’t make the playoffs cut—but if Bryant can will the team there, the postseason will no doubt prove to be as exciting and dramatic as if L.A. was a No. 2 or No. 3 seed. Bryant would make sure of that. Tonight the Lakers host the New Orleans Hornets (27-50).

4. Zamboni Zen
At fourth overall in the West, the Kings (22-13-4) are in good shape to defend their Stanley Cup title this season. On a roll of sorts, L.A. has been 5-1-2 in its last games, and heads to Dallas to make some noise and settle the score: The Stars (18-17-3) have won five of their last seven bouts against the West Coast champs. But on the road, the Kings have won on 11 of its last 14 trips to Dallas, including a 3-2 victory at the end of March.