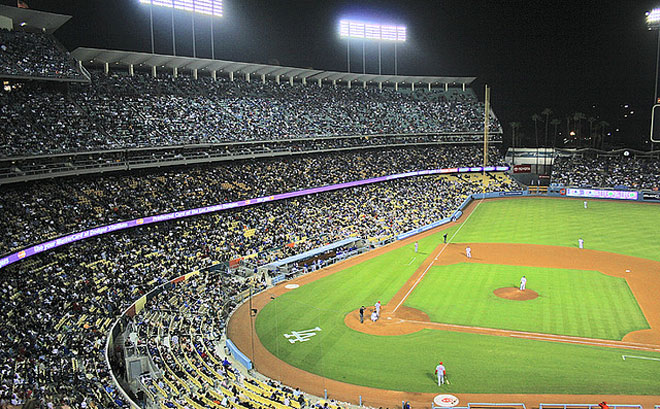 With Clayton Kershaw pitching against the red-hot Tampa Bay Rays at last Sunday’s Dodgers game, a nationally televised night contest, I knew I had to catch the action in person.

Sighing as we collectively entered our debit card info into the Dodgers’ ticketing site, a few buddies and I decided to splurge on $46, all-you-can-eat seats in Dodger Stadium’s right field pavilion.

An unlimited supply of hot dogs, popcorn and lemonade in hand, we sat on the edge of our seats to watch Mark Ellis finish a triple short of the cycle and Kershaw pitch a masterful eight-inning, eight-strikeout game to complete a sweep of the Rays.

It could have been the smog in the air. It could have been the Kobayashi-esque performance we put on during the first six innings, but there was a restless feeling that night in Dodger Stadium, one that indicated the Dodgers, with a commanding seven-and-a-half game lead in the NL West, won’t be content with just a playoff run. These Boys in Blue appear to be thinking like it’s 1988.

Vegas agrees. According to the latest odds, the Dodgers are the MLB favorite to win the 2013 World Series at 9/2 odds, followed by the Detroit Tigers at 6/1 odds.

In late June, this team was 12 games under .500 and appeared to be headed once again for NL West mediocrity. Since then, the Dodgers have been virtually unbeatable, compiling an absurd 40-8 record in the last 48 games. Finding a team this hot requires dusting off the history books and going back to 1941, when the St. Louis Cardinals had a slightly better 48-game stretch that put the team at 41-7. Ironically, the Cardinals didn’t make the 1941 World Series, missing out on the National League pennant to none other than the Brooklyn Dodgers.

The modern playoffs now have three rounds, so the Dodgers are tasked with winning a series against two of the National League’s best teams before they can earn a stay in the World Series. Over the last quarter of the season, every team, no matter how talented, has looked beatable against the blue and white, but that doesn’t mean the Dodgers are in the playoffs yet.

Here are a few key series we’re hoping the Dodgers take advantage of as October nears:

1. Aug. 23-25, v. Boston: During this three-game home stand, the Dodgers have the opportunity to face a potential World Series contender and the team with the best record in the American League, the Red Sox. While possibly serving as a preview of this year’s fall classic, the matchup will likely provide an August gut check. The Dodgers are 6-1 against above-.500 teams already this month. As an added bonus, fans could be treated to the sight of every-day Red Sox designated hitter David Ortiz playing first baseman.

2. Sep. 6-8, @ Cincinnati: Currently sitting in third place in an unbelievably talented NL Central division, the Reds could benefit from the National League’s second Wild Card slot in just the team’s second year of existence. The Reds provide the Dodgers with an interesting challenge in that they are a fairly well rounded team, with the National League’s fifth-highest home run total and the Major League’s third lowest team ERA. If both franchises make some noise in early October, the Dodgers and Reds could meet again in the playoffs.

3. Sep. 16-19, @ Arizona: While it’s conceivable the NL West race could be all but over by the time this series rolls around, the Diamondbacks represent the last team standing in the way of the Dodgers’ first division title since 2009. Led by All-Star first baseman Paul Goldschmidt, the Diamondbacks will likely play with some backbone, angry that the Dodgers’ historic stretch stole their only shot at the 2013 playoffs. Expect the crowd at Chase Field to be rowdy; the Diamondbacks, though slipping, won’t let the Dodgers put a nail in their coffin without a fight.