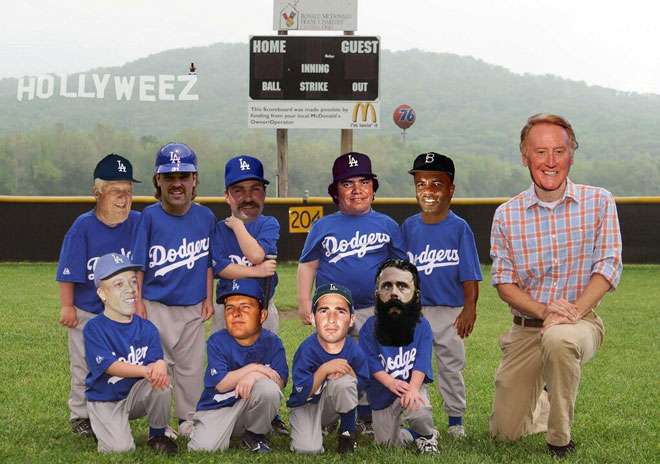 This goes out as a Public Service Announcement to all Angelenos: Expect the phrase, “Got heem!” to become part of your working vocabulary by the end of October.

That’s right, Brian “The Beard” Wilson signed with the Dodgers on Tuesday, creating a scenario we had never before envisioned.

A former Giants great who amassed 171 saves in six-and-change seasons in San Francisco, Wilson has had some bad luck of late. Roughly 10 years after his first Tommy John surgery—which ended his career at LSU—Wilson underwent his second surgery.

He spent 16 months away from Major League Baseball rehabbing and throwing the occasional bullpen at UCLA’s Jackie Robinson Stadium, and now the New Hampshire native is poised to make a comeback. After working out for a number of Major League teams, who likely just wanted to see the three-time All-Star healthy, Wilson received three contract offers. None came from the Giants. Instead, Wilson agreed to terms with a team he once hated on a pro-rated deal worth roughly $1 million.

He’ll first pitch in the minor leagues for the Dodgers, but by all indications a September debut for Wilson in blue and white isn’t out of the realm of possibility.

Let’s not kid ourselves, though. When that day comes, we’ll do a double-take. We’ll wonder for a split second if it’s another gimmick, like his 2012 ESPYs attire. But in time, we know we’ll get used to Wilson and even appreciate the difficult road he took to recovery.

For the Dodgers, this deal is a win-win. Not only do they maintain moral high ground just days after the Giants coldly declined to extend Wilson an offer, but for a discounted price they bring in an All-Star caliber pitcher with postseason pitching experience.

Even in a sub-par 2011 campaign—Wilson’s last full season before he injured his elbow—he posted an ERA of 3.11, a mark that beats current Dodger relievers Brandon League (5.12), Carlos Marmol (13.50) and Ronald Belisario (3.56). In terms of ERA, the Dodgers currently have the 20th-best bullpen, so as long as his health continues to improve, Wilson should be able to come in and make an immediate impact.

As a gesture of his goodwill toward skeptical Dodger fans, Wilson even took it upon himself to Tweet a humorous photo of what a Dodgers Little League All-Star team would look like (see above). Let’s face it: As long as Wilson can stay in the good graces of his teammates, there is always room for another character in the City of Los Angeles.

We’ve had our history, but Brian Wilson is now officially a Los Angeles Dodger, and one whose story alone deserves a round of applause as he emerges from the bullpen at Chavez Ravine.