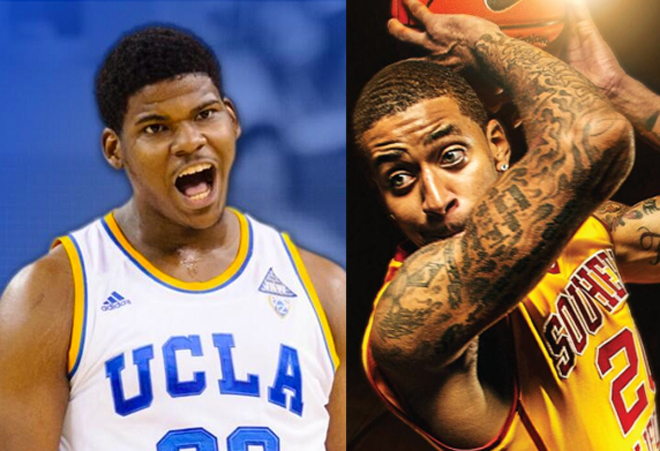 Judging by how the last two games have gone, it’s going to be a long Pac-12 basketball season for the USC Trojans. The jury’s still out for UCLA.

Last night the Bruins hosted Arizona, the No. 1 team in the nation, and showed considerable fight, charging all the way back from a 13 points deficit to tie the game at 68 with under four minutes left to play. They even led by one with as little as 1:44 remaining, but fell in the final two minutes and lost 79-75.

The Trojans also added to their loss column, but without fighting as hard for the privilege. Arizona State led by 16 at the half at the Galen Center and ultimately won 79-60 behind 20 points and 12 rebounds from Jordan Bachynski and 18 more from star guard Jahii Carson.

USC has plenty of size in its frontcourt—center Omar Oraby stands seven-foot-two, and D.J. Haley is seven feet tall—yet the team was completely dominated by Bachynski, one of the better big men in the Pac-12.

The Trojan’s loss to the Bruins last Sunday was different but altogether uglier. Their presence on the inside forced Bruin forward/center Tony Parker into early foul trouble, but overcompensating allowed the Bruins to run their way to a 107-73 victory, which ties for the most points in a single game against USC since 1966.

Sophomore guard Kyle Anderson, who is averaging 15.2 points per game for the Bruins, is playing like a potential NBA Draft pick, while the bench duo of freshman guards Zach LaVine and Bryce Alford has combined for over 20 points per game.

A strong bench effort will be crucial next week when UCLA kicks off its first Pac-12 road trip of the season and altitude forces shorter shifts on the floor in Colorado and Utah. USC, traveling in reverse order, will need to find some type of offensive rhythm, especially with an outside chance at beating Utah, a team that already has two Pac-12 losses on the board.

What about USC’s Sunday home game against Arizona? I’ll put it bluntly: No chance. The Trojans aren’t talented, deep, or hungry enough to hang with a team that has already knocked off San Diego State (on the road) and Duke this season.  Sixteen other teams have fallen at the hands of the Wildcats this season, and I expect Sunday to add another. Anything can happen come conference tournament time in mid-March, but unless the Trojans can figure something out quickly, Enfield enthusiasm could be all but dried up three weeks from now.

The Bruins’ concern over the next few weeks should be learning how to win the big one. The three losses they’ve suffered this year have come against the best three teams they’ve played: Arizona, Duke and Missouri. Tough match-up number four—which takes place next Thursday in Boulder—will let us all know if these Bruins have something in the tank.