Home Uncategorized Foam Finger: Call Off the Changing of the Guard, Chris Paul is... 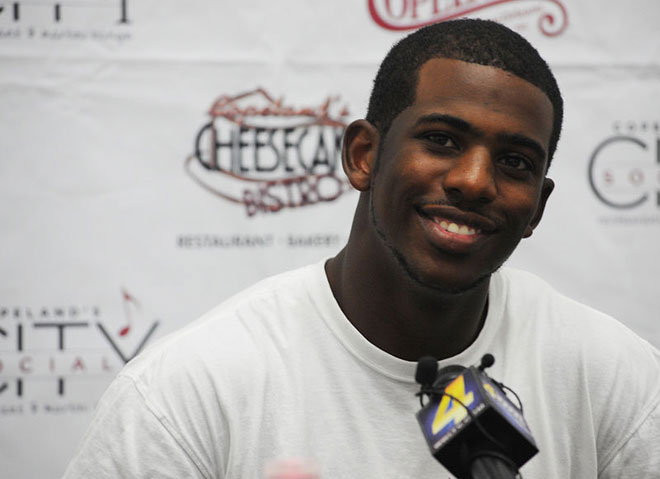 In the opening hours of the 2013 NBA free agency season, the All-NBA point guard renewed his stay in Los Angeles in the form of a 5-year, $107.3 million extension, a maximum contract which makes him one of the highest paid players in the Association.

Paul announced his decision to the world via Twitter Monday morning with an emphatic, “I’M IN #CLIPPERNATION.”  While no blockbuster deal will give him Kevin Garnett and Paul Pierce as teammates, Paul is unlikely to regret his decision—which didn’t require an hour-long ESPN special, by the way—in the next five years. Here’s why:

A Rivers Runs Through It
The recent addition of head coach Doc Rivers to the Clipper organization gives Paul and the rest of his team an approachable yet demanding basketball mind with a winning pedigree. That wasn’t the case with ex-coach Vinny Del Negro, who didn’t make it past the second round of the playoffs in his five seasons as an NBA coach.

Nothing Beats an L.A. Sunset
At the end of his new contract, Paul will be 33, nearing the twilight of his career. While Paul proved his durability in playing nearly 34 minutes per game last season, he can feel at ease knowing he can rely on guards like Jamal Crawford and the young Eric Bledsoe to run the show while he’s sipping Gatorade from time to time. Another Los Angeles basketball player by the name of Bryant can attest to the importance of team depth.

Like a Good Neighbor, Money is Here
Staying in Los Angeles, the nation’s No. 2 media market, will likely mean fatter wallets for Paul and his separated-at-birth twin, Cliff. Paul could see his endorsement opportunities expand from a list that already includes Nike, State Farm, Avon and Upper Deck.

With Paul’s signing in the books, Laker fans are now the ones wondering—will Dwight Howard stay or will he go?

Though the free-agent center was spotted working out at UCLA on Monday morning, “Stay D12,” may soon only be used to advocate the release of made-for-TV sequels to “The Mighty Ducks.” Houston, here’s why you’ll soon sign Dwight Howard, no problem:

Read My Lips, No State Taxes
Though Howard’s earnings of $19,536,360 last season leave him able to afford just about anything, he’ll be able to pocket more of his contract in a state like Texas, which boasts a state income tax of zero percent.

Star Wars
In heading to Houston, Howard would no longer have to live up to the legacy of Kobe Bryant and the Lakers, a future Hall of Famer on a team that has 17 NBA titles to its name. The Rockets’ biggest star? Shooting guard James Harden, who has ten ring-less fingers despite averaging nearly 26 points per game last season. The Rockets’ last title victory dates back to 1995.

Unhappy Feet
Throughout the last few months of the season, Howard reportedly made his frustration with coach Mike D’Antoni’s leadership style known to GM Mitch Kupchak, a move that suggests his need for a change of scenery. Howard might have better luck with Rockets coach Kevin McHale, who desperately needs a three-time Defensive Player of the Year in his rotation after overseeing one of the league’s worst defenses last year.