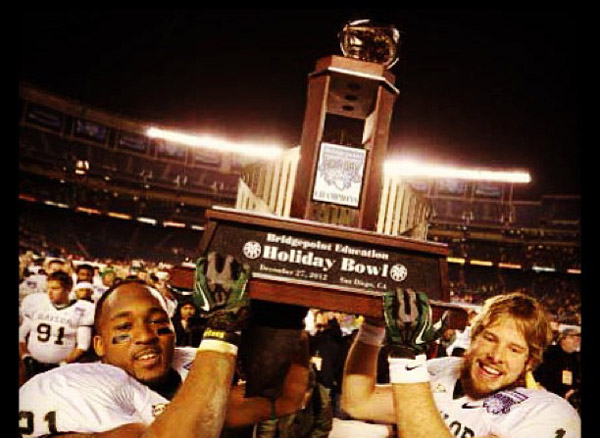 After watching Baylor trounce No. 17 UCLA, 49-26 in Thursday night’s Holiday Bowl, Bruin fans might not like the way 2012 is wrapping up. But the Bruins did end the ursine brawl on somewhat of a sweet note: In the closing seconds of the game, UCLA quarterback Brett Hundley found Logan Sweet in the end zone for a 34-yard touchdown toss. It wasn’t good enough to win or tie the game, but it was good enough to make the score a little easier to swallow and to give Bruin fans some hope for next season.

Hundley—who completed 26 of 50 passes for 329 yards and three TDs—and his teammates watched in dismay and frustration as the Bears dominated most of the game. UCLA saw Nick Florence supplant Robert Griffin III as the Bears’ season passing leader, Giasco Martin slip by for three touchdowns, and Baylor walk off the field with a commanding victory. Early in the second quarter, the Bears rushed to a 21-0 lead that the Bruins never recovered from; their defense never clicked. As for their offense, UCLA hit a major roadblock with its running game and Baylor’s defense came up big: Hundley was sacked six times and Johnathan Franklin, the Bruins’ career rushing leader, finished with just 34 yards—that off of 14 carries.

UCLA (9-5) lost its last three games—two against Stanford, which will face off against Wisconsin in the 99th Rose Bowl game on New Year’s Day—but that shouldn’t take away from the fact that UCLA has come a long way in just one season. The Bruins, the team that was shut out by an absurd amount of points by its cross-town rivals last year, is now a force to reckon with in the Pac-12. That UCLA didn’t win the Holiday Bowl shouldn’t overshadow the team’s work-in-progress-type success this year, and especially if we’re speaking comparatively about the last 13 years. Hundley is only a freshman, though technically not anymore, and coach Jim Mora has made a palpable impact in his first year—namely, a record that is better than .500. Though a win at the Holiday Bowl would’ve been a nice cap to 2012, the Bruins have the pieces in place for a promising 2013.

Los Angeles’ other college football team, on the other hand, is in the hot seat in El Paso and is having what one might consider a PR nightmare. (Google search USC to find out about coach Lane Kiffin’s and some of the players’ latest antics.) The Trojans will take on Georgia Tech on New Year’s Eve in the 2012 Sun Bowl.