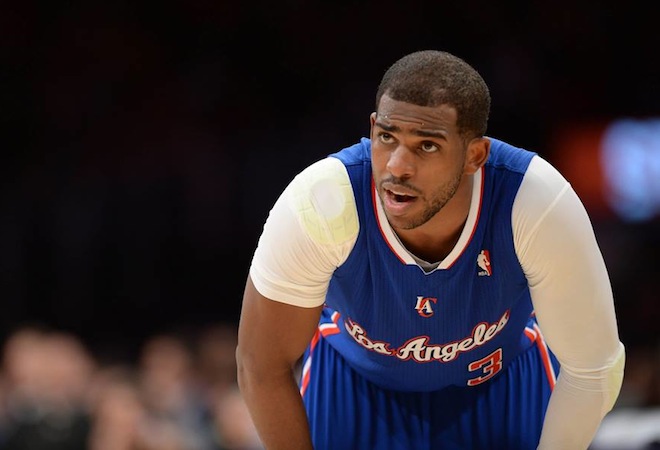 Last Saturday, there was a break in the action at Dodger Stadium, which meant it was time for either the announcer to get on the mic with a free giveaway for an upcoming series or an inspirational clip from The Sandlot on the Jumbotron. But then again, it’s Los Angeles, so why not have cameramen look for celebrities in the audience? There’s almost always someone of note in attendance. Sometimes it’s Twilight’s Taylor Lautner, other times it’s that guy from that Fox sitcom that’s about to be cancelled.

On this particular day, the camera found Chris Paul, one of the most well-respected athletes in the city—or so you would think. Paul was booed mercilessly by the fans in attendance.

And it’s not because he’s not a great player—19 points and nearly 11 assists per game this season indicate otherwise. It’s not even because the Clippers are a losing team. They’ve won 55 games and clinched home-court advantage in the first round of the playoffs. They’ve also won three of their four matchups with the Lakers this season. But the Clippers, simply put, are not the Lakers, and despite the latter’s continued ineptitude this season, Los Angeles is a Lakers town.

And I can’t say I disagree with the boobirds. The man is an incredible athlete, and at 28 he still has plenty of All-Star seasons in his near future. But he hasn’t given us a reason to love him, to make us want him to be part of the Mount Rushmore of basketball greats.

It starts with the trophies, of which the Lakers have 16 while the Clippers have none. Where the Lakers flash rings, the Clippers display mediocrity. They won just one playoff series in their first 35 years, finally breaking the dry spell with a first-round series win over the Denver Nuggets in 2006. They have yet to win multiple series in the same playoffs. I’m about to start booing right now!

Even though the team will celebrate their 30th year in Los Angeles next season, they’re always gonna be the new kids on the block. The Lakers have been in town since 1961 and have given fans plenty to cheer about at the same time as the Clippers have waffled over coaching changes and delivered sub-.500 seasons. Paul and Blake Griffin are a winning combination that absolutely demolished the Lakers 120-97 at Staples Center last Sunday. But together they’re not Kobe. They haven’t won five titles, much less advanced to the Western Conference Finals.

Chris Paul got an unpleasant, downright rude reception in Dodger Stadium on Saturday, but there’s only one way he can fix that: Win the championship, and flash the ring that proves it.