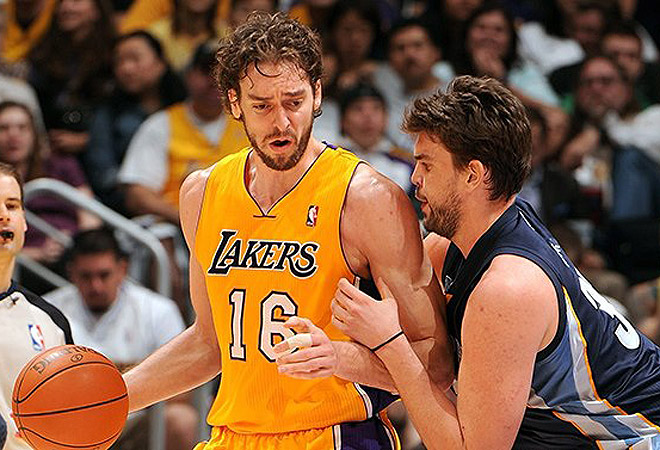 Is it Game Over For the Lakers?
The Lakers have fought long and hard to sneak their way into the NBA playoffs, but injuries continue to plague the wannabe underdogs. Kobe Bryant is out for months because of his Achilles, Steve Nash is battling a bum hamstring, Jodie Meeks has problems with his ankle, and now Steve Blake is out indefinitely because of a moderate strain of his right hamstring. The Lakers fell 102-91 on Wednesday to Tony Parker (who came away with 30 points) and the Spurs. Bryant is quiet—for now—on social media as the Lakers, who will likely embrace Darius Morris, prepare to host San Antonio for Game 3 tonight at the Staples Center. (ESPNLA)

The Clippers Hit A Speed Bump
Everything was looking good—real good—for the Clippers until Game 3. The squad was heading into Memphis’ FedExForum feeling great and looking for a third victory, but then something happened. Zach Randolph, aka Z-Bo, happened. Z-Bo and Co. bullied the Clips inside and re-established the gritty dominance that some viewers might recall from playoffs. The result? Memphis’ first triumph of the series, a 94-82 win to be exact. Not only were the Clippers riding a two-game win run, they were also touting a nine-game home-stretch streak. The Clippers will be looking for some on-the-road redemption come Saturday. (USA Today/AP)

Getting Drafty in Here
The NFL Draft kicked off yesterday, and it didn’t really pan out as advertised. No running backs went in the first round—lots of offensive linemen did, though—and only one quarterback was picked. Eric Fisher, from Central Michigan, was snagged as the No. 1 pick by the Kansas City Chiefs. After that, a series of unlikely twists and turns followed, leaving a swath of talent still on the board: Notre Dame’s Manti Te’o, USC’s Matt Barkley and Robert Woods, West Virginia’s Geno Smith, and Alabama’s Eddie Lacy are among the big names still up for grabs. Rounds 2-3 start today at 3:30 p.m. PT on ESPN networks. (ESPN)

Kings Trying to Keep Their Crown
The Los Angeles Kings (26-16-5) are Dustin Brown-less thanks to an elbow-related suspension. With the road being fairly unkind to the Kings this season, the squad fell in Detroit 3-1. Jonathan Quick had 33 saves, but L.A. couldn’t seem to find a rhythm. Kings GM Dean Lombardi gave an interview on Fan590 yesterday and touched on a few talking points, which included Brown’s suspension and Willie Mitchell’s injury. The Kings will get a chance to make some noise at home, when they host the San Jose Sharks, on Saturday night. (SBNation)

USC’s Dedmon Declares A Detour
On the heels of USC’s Andy Enfield acquisition, the Trojans’ Dewayne Dedmon announced Wednesday that he would be leaving the land of Troy and heading to the Big Leagues. Enfield and USC will now have to re-realize the high-flying feats and wonders of “Dunk City” with a new starting center. The junior 7-footer explained that it was “time to chase my dream and go to the NBA,” explaining that he thought it best to go pro at this time. The 2013 NBA Draft will take place on June 27 at Brooklyn’s Barclays Center. (Daily Trojan)

Pitcher Problems? What Pitcher Problems?
The Dodgers (10-11) have lost Chad Billingsley, who underwent Tommy John surgery Wednesday evening and who will expected to be out for roughly a year. The squad came out of camp with eight veteran starting pitchers, but, thanks to injuries to Billingsley, Chris Capuano, and Zach Greinke—as well as the trade of Aaron Harang—the Dodgers are down to four. Others have stepped up, though. A top-shelf pitching performance by Hyun-Jin Ryu helped the L.A. team overcome the New York Mets 3-2. Next up: The Dodgers host the Milwaukee Brewers (11-9) tonight at 7:10 p.m. PT. (ESPNLA)