Home Uncategorized Foam Finger: A Lakers Three-peat Sure Isn’t What It Used To Be 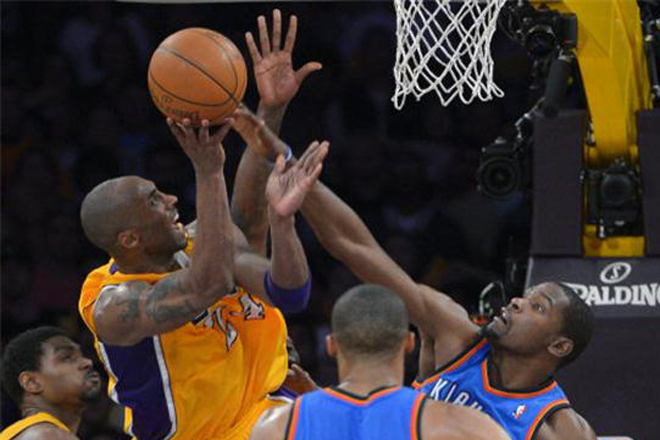 A friend of mine posted the following status on Facebook on Sunday night: “Let’s see how many people begin jumping ship.” It was in reference to the Lakers impressive 105-96 win Sunday over the defending West Coast champs, the Oklahoma City Thunder. Of course nobody actually counted how many, but it’s safe to say a good number of fair-weather Lakers fans that have spent the last few months cheering on the Clippers are now back, touting Kobe and Co.’s three-win streak as a presage of good things to come. You can see it on social media. You can hear it on the radio. But, a championship? We know that’s not going to happen. A play-off berth? A better-than-.500 record? Those seem out of reach as well.

I’m happy the purple and gold beat the “Pelicans,” but three wins isn’t a true streak. And if the Lakers get too comfy, they’re going to slump back down to where they were at the beginning of the season, struggling to find a rhythm, an identity, and a plan of attack. Full disclosure: I’m a Lakers fan, and one that never really liked the idea of chanting Lob City. Sure, it’s fun—the Clippers are easily a more exciting team to watch—but I’ll always identify with Kobe and Co. That doesn’t mean I believe the Lakers are going to bounce back—and that they’ll do it starting now. Chances are the Lakers will win tonight against the Suns. At least I’d hope they’d have the mid-season gusto to do so. But even with a potential four wins under their belt, we know (or should know by now) that the big picture of this season isn’t going to dramatically and miraculously change.

Kobe Bryant has been the only consistent form of true offense the Lakers have seen all season, and over the course of his career, the Kloser has developed a reputation for his master-of-all-trades style of play, dishing when he needs to, shooting when he needs to, and coming up clutch in the nick of time. But any time the Lakers have had to rely on a one-man-show, it’s never resulted in a championship. Not with Bryant. The Lakers are always most successful when Kobe has somebody to play off of. But the Shaq days are long gone, and over the years, we’ve seen many a center pass through the paint, and with what? Not much. Other bigs such as Pau Gasol and Metta World Peace have been effective but in the most ephemeral of ways. We had hopes with Howard, and maybe he’s finally waking up and growing into his role, but we’re not going to see the fruits of those labors before the fall. We’ve been underwhelmed this season. I want so badly to say, “In Nash we trust,” but right now it would be a lie. And the other supporting roles on the team are hardly doing what their names once implied.

Three wins are nice for now, I agree with that. But the Lakers will be defined by their upcoming seven-game onslaught. My advice to fans: don’t get your hopes up. As much as it pains me to say, Showtime isn’t coming back this season and Lob City, if you’re between ships, is the place to be. I’m happy to get proven wrong.