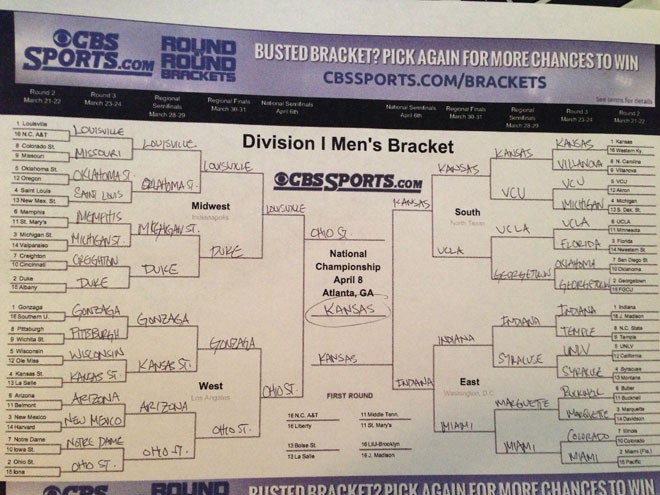 The First Four is done, so now the Round of 64 begins. In other words, the sports world is about to go mad. Spring after spring, I find myself pulling out my hair—oftentimes because I pick underdogs and teams I like rather than teams that are statistically proven to be better than others. As a result, I consistently perform poorly in my family’s NCAA tournament pool, which inevitably ends with my uncle asking, “Why did you have Georgetown going so far?”

Why do we make the dumb picks that we make? I’m not sure. Hampton Stevens wrote yesterday for The Atlantic that the fun of filling out brackets is not about logic, stats, or basketball knowledge. Whether he’s serious or not, that’s how I’ve always done it:

“They don’t call this tournament ‘March Logic,’ after all. It’s madness! The only way to fill out a bracket is to throw away all you think you know and fully embrace the crazy. Go with your gut. Go with hunches. Pick against teams because you hate their uniforms. Take them to win because you love their mascot.”

The number crunching is out there. So if you prefer, Google March Madness and pore through analysts’ discussions of why Ohio State is this year’s best bet. Or, take a look at Mr. President’s picks. Fun fact: Obama said, of his bracket: “I like Syracuse, mainly because Biden told me if I didn’t pick them, he wouldn’t talk to me.”

Here are the First Four results:

As you can see, the Madness for me began earlier than expected. Get your pencils ready—because if you haven’t filled out your brackets, there’s still a few seconds to get started. Here’s my gut-picked bracket, plus the teams I suspect will ruin me:

Bad Decisions: This year my uncle is going to ask me why I had UCLA going so far, and why I finally had Georgetown not taking the South. My answer: I like Bazz the Beast, and I think the Bruins have the ability to make some noise, although they won’t be able to take Kansas. I also don’t trust Syracuse. Biden would be upset, but I think Indiana can blow past them. Aside from that, the pervasive parity that is being featured in this year’s tournament will be enough to bust my otherwise fairly safe bracket.

Cinderella: I don’t feel comfortable calling any team a true Cinderella pick in this year’s tournament, but there is one that I would like to see become one. Though I didn’t predict them winning a game at all, Harvard—who didn’t win a game last year either—would be the most fun to watch. It’s been years since they’ve won a game at all in the tourney, and how often do you hear about those Ivy League guys doing well in March Madness? Maybe it’s just not their style, but it would be nice to see the glass slipper on some Crimson feet. (It won’t happen, though, don’t worry.)

Champs: As has been noted throughout the year, Kansas, although a top-seeded team, is not the most consistent. And honestly, I can’t remember the last time I picked the champion correctly. But for some reason, I feel that if they can make it past the lower-seeded threats in the South—VCU, UCLA, Michigan—and gain some momentum, they’re a fun bet for taking it all.

I don’t plan on recouping my $20 bet, and I don’t plan on having my uncle say, “Wow, those are some good picks.” Because he never does, and there’s always a handful of teams that come out of nowhere. This year is sure to be no exception. Teams like Bucknell and Southern U. could sneak up on me, as well as others. But that’s what makes these blessed weeks of March so fun. Sometimes, it’s worth the price of admission just to get in the game.