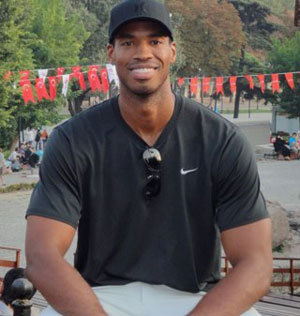 Forget the Lakers and their very forgettable season; a thunderbolt Monday rattled the league when NBA center Jason Collins, who played for the Boston Celtics and the Washington Wizards this season, came out as the first openly gay, active player in one of the four major U.S. professional sports leagues.

Collins revealed his sexuality in a first-person story that was posted on Sports Illustrated’s Web site. Thus far, the center has received overwhelming support (mostly)—including plaudits from the likes of President Barack Obama, FLOTUS Michelle Obama, Bill Clinton, Lakers star Kobe Bryant, and former athlete (and current talk show co-host) Michael Strahan, among others. Collins reportedly started the day with 4,000 Twitter followers. The 12-year NBA veteran now has upward of 90,000. Now being praised as a revolutionary, Collins flew under the radar for most of his career. So who is he, exactly? Collins begins his Sports Illustrated essay with the words “I’m a 34-year-old NBA center. I’m black. And I’m gay.” Here are ten other descriptions that also apply:

He’s an Angeleno
Collins grew up in the L.A. suburbs and attended Harvard Westlake high school, where he graduated in 1997. There he was backed up on the hardwood by none other than actor Jason Segal.

He’s a Twin
Jason has a twin brother named Jarron. The two played together at Harvard Westlake, where they helped the school win two California Interscholastic Federation titles and notch a combined four-year record of 123-10.

He’s a Tree
Collins and his brother also played basketball for Stanford, where they graduated in 2001. Jason was named, in 2001, to the All-Pac-10 first team. Stanford also won a Pac-10 title with the Collins brothers aboard and appeared in the Big Dance’s Final Four.

He Was a First-Round Draft Pick
The Houston Rockets drafted Collins in the first round of the 2001 NBA Draft. During his 12-year career, he has played for six teams: the New Jersey Nets, the Memphis Grizzlies, the Minnesota Timberwolves, the Atlanta Hawks, the Boston Celtics, and the Washington Wizards.

He’s a Playoffs Regular
He has made nine playoff appearances in the NBA: six with the New Jersey Nets—including two appearance in the Finals with the 2002 and 2003 squads—as well as three others with the Atlanta Hawks.

He’s The Inspiration For a Parlor Game
There’s a parlor game named after him. Called Three Degrees of Jason Collins, the game originally centered on the journeyman’s seemingly endless amount of NBA connections.

He’s Sentimental
He wore No. 98 for the Celtics and the Wizards, a choice he says was made in honor of Matthew Shepard, the gay University of Wyoming student who was killed in ’98.

He’s a Free Agent
Collins is now an unrestricted free agent. He’ll be leaving the Wizards and, quite frankly, looking for a job. Though his skill set has been described as “limited,” some execs are calling the up-for-grabs big man “more interesting” given his raised profile.

He’s A Friend of the Prez
President Obama calls him a friend. Said POTUS: “He seems like a terrific young man. I told him I couldn’t be prouder of him.” The President added that the LGBT community deserves full equality, not partial equality.