Home Outdoors Gardens and Green Spaces These #FlowersOnYourHead Photos Will Transport You to a Blooming, Bucolic L.A. 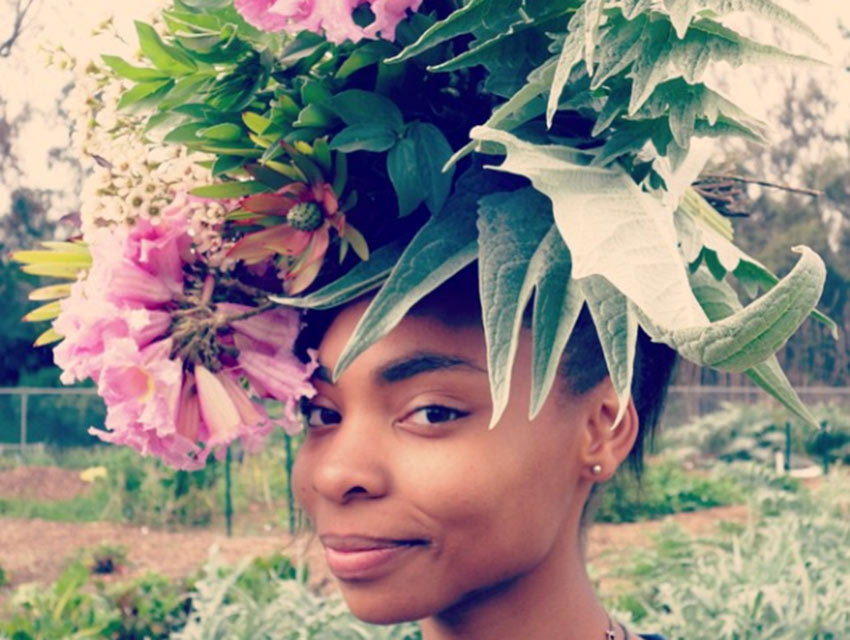 A little more than a year ago Mud Baron, project director at John Muir High School’s urban community farm, Muir Ranch, was unloading a truck full of lilies, tulips, and daisies with students when a vision stopped him in his tracks: He had handed Ashley, one of the kids he was working with, too many bouquets and she was suddenly covered in flowers. “I’m like, ‘There it is!’” he remembers now. Baron snapped Ashley’s picture, then uploaded it to Instagram with the hashtag #flowersonyourhead.

Today, more than 800 other pictures share that tag, and what began as a “pretty accident” has turned into a social media campaign promoting urban gardening and, well, flowers. “It’s a political statement,” says Baron. “If you look at the development decisions that are made by business and local politicians, what we get constantly is a stream of strip malls and concrete. You can’t eat that. Other species don’t eat that, either. What might seem like a trivial Martha Stewart-esque effort, isn’t. With #flowersonyourhead I’m doing [environmental artist] Andy Goldsworthy but including people into my art.”

Baron, who dreams of developing a charter school with a “maker” curriculum (think kids studying the arts of brewing coffee and furniture design), is currently working to raise funds to install a new aquaponic system at Muir Ranch. He says he’s been happy to see #flowersonyourhead adopted by other users on social media. “I want more flowers in more places,” he says. “I want people experiencing them.”

These #flowersonyourhead pictures are his favorite: