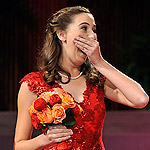 Looks like everything’s coming up roses for 17-year-old Ana Marie Acosta, who just yesterday was named Rose Queen by the Pasadena Tournament of Roses Association.

Acosta, who prevailed over 900 other young Pasadena-area women to win the title, is quite accomplished for someone her age (but perhaps expectedly accomplished for someone who just snagged a Rose Queen crown): captain of the equestrian team, cabinet member of Polytechnic School’s Girls Service league, member of the school’s Ambassadors Council, and a National Charity League participant. She’s even a Girl Scout.

The Pasadena Tournament of Roses Association, which has annually staged the New Year’s Day Rose Parade since 1895 and the Rose Bowl Game since 1902, will be celebrating its 125th Rose Parade and 100th Rose Bowl Game this year. During the preliminary and main events (which usually run October through January), Acosta and her court of Rose Princesses will be required to make upwards of 100 media appearances. Their services may be required for four months, but on the plus side, the girls will only have to attend school a few days a week for a handful of hours at a time—any 17-year-old would call that a great tradeoff, don’t you think?

Check out the slide show above to see Acosta’s crowning moment.