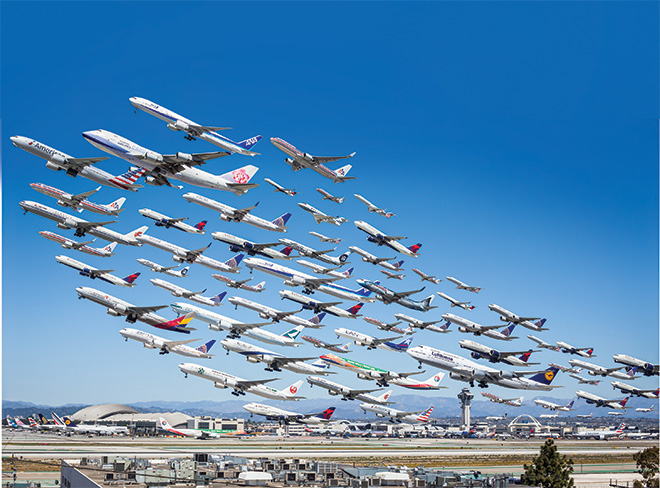 “LAX is Happening.” Plastered on freeway billboards and blaring on the radio, this bold proclamation by the board of commissioners of Los Angeles World Airports emerged in late spring. If some people responded by muttering, “Yeah, right,” that would only be natural. For decades LAX has been anything but happening. Just three years ago it claimed second place on CNN’s list of “10 of the World’s Most Hated Airports” (behind Charles de Gaulle in Paris, which probably has more to do with the Parisian distaste for visitors of any kind).

The current modernization program for LAX was set in motion in January 1995, the same month Johnnie Cochran gave his opening statement at the O.J. Simpson murder trial. When Mayor James Hahn tried to awaken the project from its coma nine years later, he was greeted by NIMBY naysayers. Local pols supported area residents’ concerns that airport expansion would affect neighborhoods already overstressed by traffic snarls and jet engine noise.

The expansion plans were dropped, opposition slackened, and last September the reimagined Tom Bradley International Terminal made its premiere. With its rad steampunk-meets-It’s a Small World monolith clock, rip curl-wave roof, spa treatments, and food from Umami Burger as well as pork belly sandwiches from Michael Voltaggio, the Bradley terminal takes the form of an alternative LAX reality.

The board’s design guidelines aim to extend the Bradley aesthetic throughout the airport. Preliminary work has begun to revamp terminals, streamline security and baggage handling, and add dining and shopping options courtesy of mall developer Westfield Group. An above-grade LAX People Mover to speed travelers from light-rail lines and the rental car campus to the airport has been slowly chugging along despite an ongoing debate among LAWA, Metro, and a couple of county supervisors who won’t drop the idea of tunneling underground.

Though the result will surely be worth the trouble, all this belated activity is going to create even greater havoc than usual at the airport this summer. The Web site laxishappening.com was launched not only to tout the changes, but to inform travelers about how to navigate such obstacles as the retrofit taking place on the departures-level roadway. “We have a very robust digital marketing campaign,” says LAWA spokesperson Mary Grady. Good thing it’s taken so long. In 1995, when this all started, robust digital marketing campaigns were a technological impossibility.