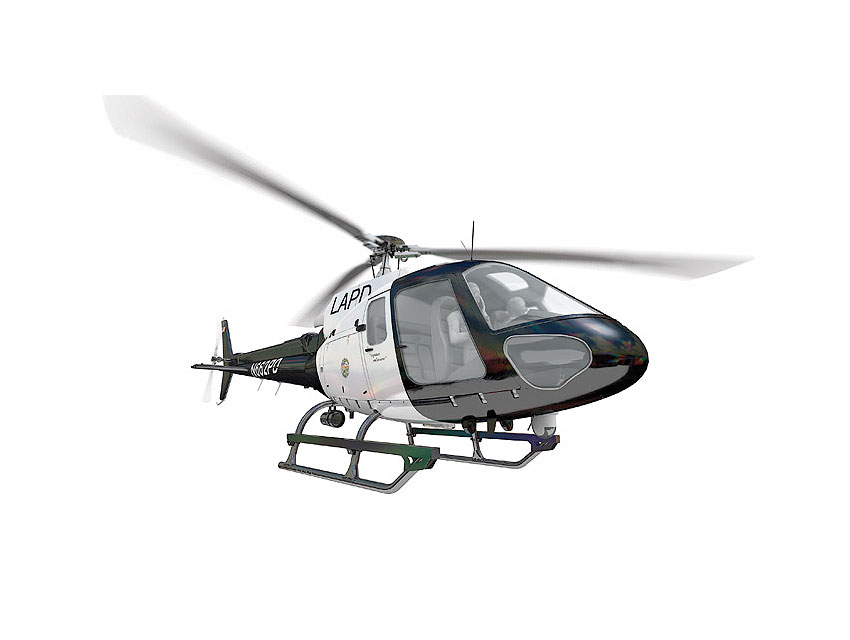 Though they’re nicknamed “ghetto birds,” LAPD helicopters cover a massive area—468 square miles of L.A.—which may explain why you can almost always spot one somewhere overhead. Cop choppers are used in roughly two-thirds of pursuits, with at least two on patrol 18,000 hours a year. Here’s an overview.

Movement
The chopper makes left-hand circles above crime scenes (hovering low can be hazardous). It usually tracks a ten-block area in case a suspect flees.

Engine
It costs $800 to $900 per hour to fly the helicopters because of the rigorous maintenance schedule; new ones cost less to operate. By 2012, many in the fleet were nearing the end of their ten-year flying service, and the Air Support Division hopes to replace them in the next few years.

Doors
Built like car doors, these have fewer problems than standard sliding-rail models and have a bigger window on the pilot side for visibility. Doors are removed when deploying SWAT snipers, and all choppers have bulletproof floors.

Seats
There are four seats. The front two are for the pilot and the tactical officer, who controls the intel-gathering cameras and communications equipment.

Rotor
Three blades measure 35 feet in diameter and turn 390 revolutions per minute, with a top speed of 150 mph and an average speed of 70 mph. A chopper can climb as high as 20,000 feet and hover as low as 400—about the height of a 30-story building.

Body
The airborne unit started in 1956 with one Hiller 12J helicopter and four pilots monitoring traffic from the sky. There are now 17 helicopters and 48 pilots. The current model is the Eurocopter AS350 B2, which when fully equipped costs $3 million. The LAPD spends roughly $250,000 annually to maintain each chopper; a total of $5 million was spent last year.

Fuel
The 143-gallon tank uses jet aviation (Jet A) fuel. Each helicopter can fly for about three hours before refueling.

Sound
The decibel range depends on the height and speed of the aircraft. Inside the cabin the noise is between 73 and 77 decibels (about the same level as a vacuum cleaner).

Tools
Onboard are GPS systems, high-definition surveillance cameras, and infrared imaging cameras with a data link that enables authorities on the ground to see the aerial view instantly. A Nightsun searchlight can illuminate an area with the power of 50 million candles, reaching suspects a mile away.