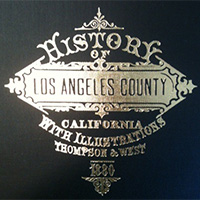 History of Los Angeles County, written by J. Albert Wilson and published by Thompson & West in 1880, offers a broad look at our metropolis—a century before the area became home to Ice Cube, Wolfgang Puck, Belinda Carlisle, and countless others featured in our “The ’80s” issue. Los Angeles in the 19th century was a small town (estimated population: 12,000), surrounded by orange groves and vineyards, and the 1980s (VHS tapes! tanning beds!) were not even a glimmer in an Angeleno’s eye. Here are a few examples of what life was like:

1. Manufacturing
“Soap making is, probably, the oldest industry in the county,” according to the book. Other local factories were producing bricks, carriages, wagons, wool, artificial stone, and brooms. Pork packing and beet sugar manufacturing were huge, too. The whaling business, which had “quite extensively carried on in 1860, ’61, and ’62 in San Pedro bay,” was no more.

2. Earthquakes
They existed even then.

“Upon Sunday morning, March 26th, at 6:20 o’clock, a slight shock of earthquake occurred, but occasioned no damage.”

4. Journalism
The Los Angeles Times was first published on December 4, 1881. It joined a large group of newspapers in this pre-Twitter era that competed for readers’ attention. Among the eclectic options:

• “La Cronica is the only Spanish paper of any importance published in southern California.”

• The Sued Californische Post “is the only German paper published in southern California.”

• “The Herald has always been Democratic in politics.”

• The Journal “is Republican in politics.”

5. Crime
You wouldn’t hear this on an LAPD scanner today (at least, we don’t think so):

“About eight o’clock in the evening of March 4th, six masked men came up to the store of Mr. Crowder at Orange, and taking possession, tied all the occupants. They secured some three hundred dollars and left on horseback.”