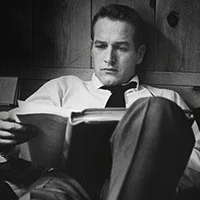 In Hollywood Digs, veteran film and television writer Ken LaZebnik exhumes fragments of film history that have, for the most part, managed to remain a mystery. In this collection of essays, he uncovers the backstories of many of L.A.’s luminaries, shedding light on his subjects in a way only an industry insider can. Here he shares where his inspiration came from, the strangest story he managed to unearth, and how his own experiences played a role in crafting each tale.

What exactly got you interested in digging into the histories of icons like F. Scott Fitzgerald, Paul Newman and Judy Garland?
There was always some personal connection, no matter how small, between myself and the iconic figures I wrote about. In the case of F. Scott Fitzgerald: I attended Macalester College, in St. Paul, Minnesota, where Fitzgerald grew up. As a college student, I’d go to the bar he frequented as a young man (and which remarkably had changed very little). When I moved to Los Angeles, I got on a Fitzgerald reading kick. I was reading a collection of his correspondence when I saw one of his letters marked with a return address on Amestoy Avenue. I realized I knew Amestoy Avenue very well—I drove by it all the time to my son’s baseball games. Digging deeper revealed that the Amestoy address was actually the estate of Edward Everett Horton, the actor who played all those butlers in the Astaire and Rogers films, and the shock that America’s great novelist was reduced to renting a cottage from the butler formed the heart of the essay. In the case of some of these other major figures, I’ve had the good fortune to meet people who knew them: George Schlatter was the first producer of The Judy Garland Show and he told me about that extraordinary experience. A friend of mine knew Paul Newman through their mutual work at Kenyon College. So my interest almost always began with a very personal, tiny peek into the celebrity’s life.

You weave your own Hollywood successes and failures into the stories of these famous folk. What was that writing process like?
Frankly, I was initially terrified of writing about my failures in Hollywood. Failure is the one unforgivable sin out here. I was fine with writing about the successes (such as my experience with Peter O’Toole during Thomas Kinkade’s Christmas Cottrage). But I worried that to write of a failure—my dismal year on Providence—would sound like either sour grapes or just paint myself as a loser. In the end, I believe that honesty is a cleansing and regenerative experience, and so I just tried to write about that time with honesty and an open spirit. Once I made that decision—to dispense with any bullshit—the writing was easy.

Of the lives you highlight in Hollywood Digs, which is your favorite and why?
I will initially mention Kathy Kohner Zuckerman, the real Gidget, just because she is such a fantastic person, and I treasure the friendship we struck up during the experience of writing about her life. But my favorite subject, I will confess, is Jock Mahoney. He lead such an outsized life—athlete, stuntman, cowboy actor, Tarzan, drinker, smoker, horseman—and seemed to relish life so completely (his daughter describes the Polynesian parties he threw, in which he donned a grass skirt, leafy headdress and traditional Polynesian shin ornamentation, blasted Martin Denny’s band on his hi-fi and launched into a spectacular Ote’a Tane dance in his Encino backyard)—the man had a great zest for life that I find completely captivating.

What’s the strangest bit of history you discovered while writing the book?
I think it was that Samuel Goldwyn, of all people, wrote in 1949 an essay entitled “Hollywood in the Television Age” in which he completely predicted Pay-Per-View TV viewing. He wrote, “Reduced to its simplest terms, it is a system by which any television-set owner will be able to call his telephone operator, tell her that he wishes to see The Best Years of Our Lives… and then see the picture on his television set. The charge for the showing of the picture will be carried on the regular monthly telephone bill.” The man jumped over two generations of entertainment delivery systems in one bold stroke!

Any plans for a second installment?
Yes, and it will once again feature the extraordinary photography of Leigh Wiener, whom I consider a national treasure that is waiting to be rediscovered.