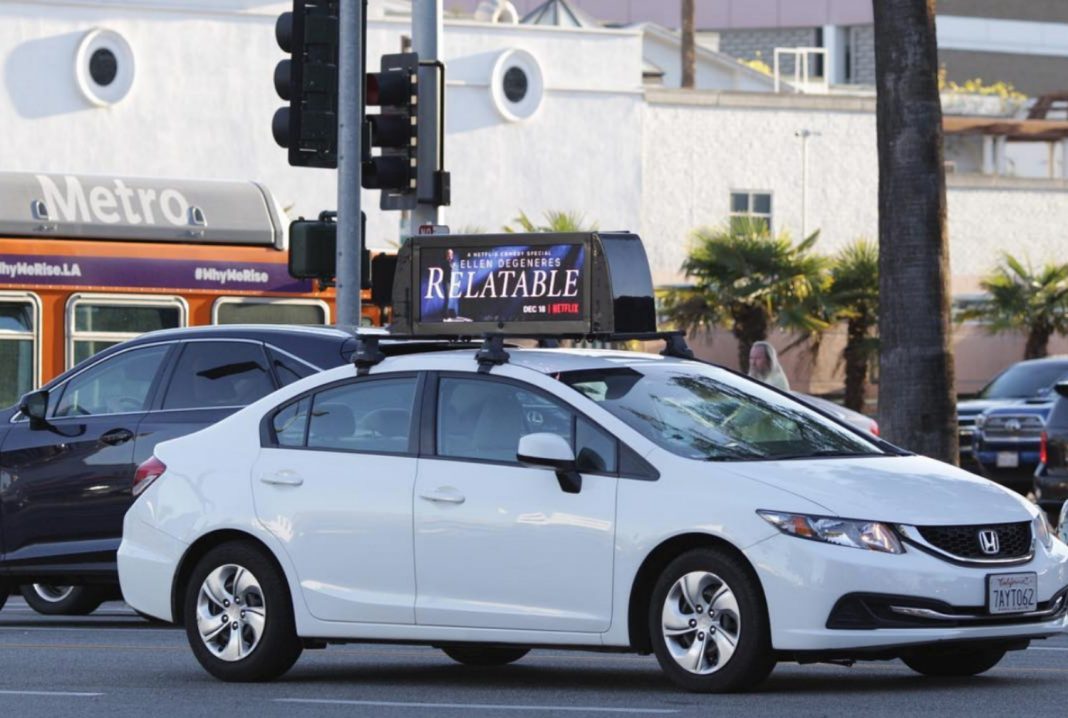 For L.A.’s billboard merchants, business is booming. As of last spring, billboards on the Sunset Strip were commanding as much as $100,000 a month, thanks to tech’s affinity for outdoor advertising. More recently, Netflix purchased nearly two dozen billboards in the area for a cool $150 mil, and since 2008, the number of digital billboards along California’s highways has tripled.

But not everyone is cheering on the proliferation of ads in the visual landscape. For years, L.A. District 3 city councilman Bob Blumenfield has been battling billboard companies, which he refers to as “blight merchants.” His fight with the industry reached a fever pitch in the San Fernando Valley years ago, when reps for the billboard companies “knocked on [Blumenfield’s] door, screamed at him in front of his children and left billboards lying on his front lawn,” according to Blumenfield’s spokesperson, Jake Flynn.

Now, Blumenfield is going after Firefly, an advertising company that outfits Ubers and Lyfts with digital billboards on their roofs.

The councilman recently submitted a motion that would essentially ban all Firefly ads in the city—which number in the mere hundreds. “In reality, driving with these billboards was already illegal,” says Flynn. “We’re just making it crystal clear so that the city doesn’t have laws on the books that are out-of-date.”

Firefly’s representatives say that the move would further hurt rideshare drivers, many of whom have already seen their per-mile wages slashed over the last few months. By transforming their cars into roving billboards, Firefly would allow cash-strapped drivers to make an extra $300 in supplementary income every month, the company says.

Pete Gould, Firefly’s policy director, says the company has done everything in its power to ensure compliance with city restrictions. “We’ve done independent safety testing and brightness testing and provided that to the city attorney’s office and heard nothing back for months,” says Gould. “And now they’re coming up with new interpretations of laws.”

But Blumenfield says that Firefly’s mobile billboards are inherently distracting and could cause accidents. “If we let these digital ads fly through traffic we risk making every street in Los Angeles illuminate as bright as the top of an ambulance, inherently making it unsafe for anyone sharing the road,” Blumenfield wrote in an op-ed for the Daily News.

Whether a Firefly billboard is distracting or not surely depends on where you’re standing (or sitting). From the front or back, the display is hidden, making the rooftop bulge look more like a cargo carrier. But, says, Flynn, “the theory that drivers won’t see these things only works if you think of L.A. as a checkerboard. As anyone who’s driven San Vicente knows, there are a lot of curves, and you’re going to see TVs on top of cars.”

Blumenfield’s other qualm with Firefly concerns the brightness of its displays, which his office pegs at more than .05 candela per square inch. (Firefly says their displays vary in brightness but are considerably dimmer than that figure. They say the California Highway Patrol and other municipal agencies have denied repeated requests to have their displays tested.)

“They say it’s not distracting, but if they didn’t attract attention, they wouldn’t be good sources of advertising,” Flynn says. He sees a perilous path from Firefly to ever more distracting illuminated displays. “What stops them with regards to size? Why not go bigger? We’ve seen it in New York and Las Vegas. If we don’t nip this in the bud now, what could happen next?”

Damien Cortez has been driving with Firefly for more than a year, and says the experience has gone down without a hitch. “I stand out so I’m easier to spot and I feel safer, as a driver, going into some parts of Los Angeles because I’m noticeable and illuminate more than other vehicles,” he says. “If I’m going down a street that’s maybe gang-related, they know that I’m there just to pick up passengers and I’m not there for anything else.”

Officially, Uber still bans commercial ads on cars, but rideshare experts say the rule is haphazardly enforced. Cortez said he’s had his car inspected by Uber and was told by company representatives that he could keep the Firefly ad as long as he gets his car privately inspected.

He adds that Firefly provides free Wi-Fi for all passengers, which helps him earn more in tips. “This motion affects my living wage,” he says. “It takes away almost 20 percent of my gross income and that affects my ability to pay for my lights, my cell phone, and food for my kids.”

Blumenfield’s op-ed strikes a different tone. “If we don’t formally prohibit them now, they will spread like the virus that they are,” he wrote.