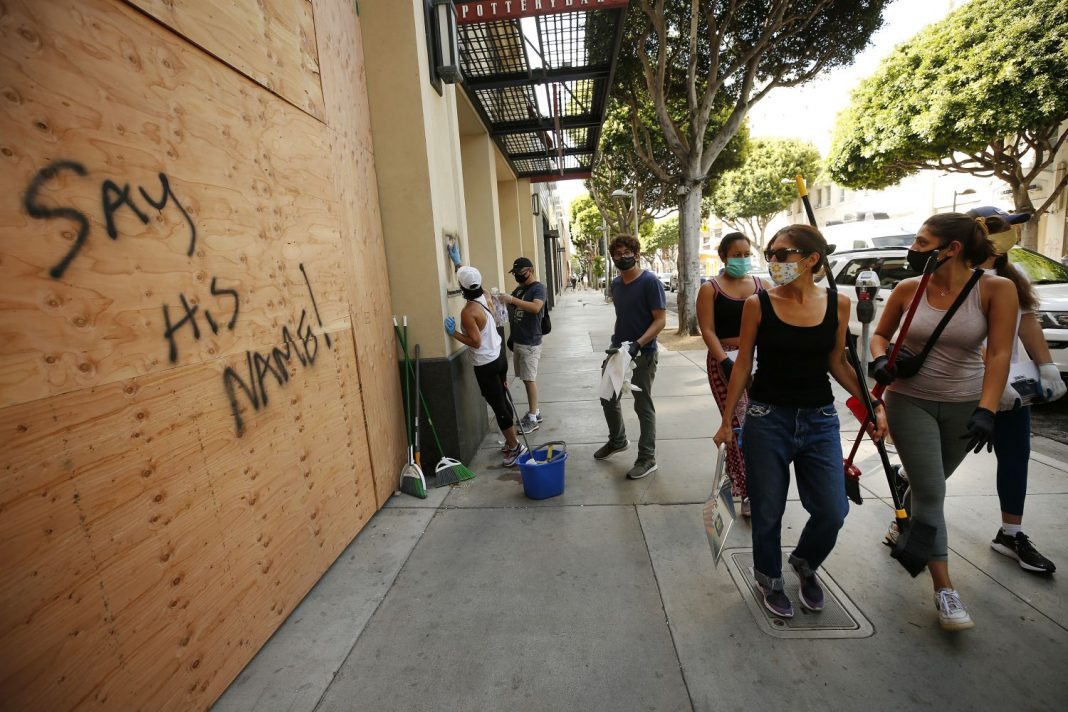 The journalism student who lost her internship at the Washington Examiner earlier this month after a video of her allegedly pretending to put up plywood at a damaged Santa Monica storefront went viral now says she’s been misrepresented by the “cancel culture” bandwagon.

In a USA Today essay published Wednesday, Fiona Moriarity-McLaughlin says she never intended to use a photo of herself holding a drill to a boarded up storefront to make it seem like she was helping to repair damages in the wake of a May 30 George Floyd demonstration, but that “as a young journalist” she simply wanted to “visit the destruction and document what I saw.”

After filming “the unsung heroes” in cleanup and construction crews at Patagonia and Roadrunner Sports, along with the Chick-fil-A employees giving them sandwiches, Moriarty-McLaughlin says she noticed the worker putting up plywood.

“All I wanted to do was record and recognize the work and back-breaking labor of individuals many take for granted who helped restore Los Angeles. But I stepped unwittingly into an online cesspool of sanctimony, false narratives, and clickbait.”

“I thanked him for his effort,” she writes. “As we discussed the cleanup, he handed me the drill in a joking and friendly manner. I went with it, and in the spur of the moment, a photo was snapped. There was absolutely no malicious intent, no big master plan. The accusation it was some sort of so-called ‘influencer’ photo op or attempt to appear like I was cleaning up is completely false.”

After the man who’d accompanied Moriarty-McLaughlin to the scene—who she identifies as her father, not her boyfriend as he had been reported at the time—snapped the photo, she continues, “I noticed two activists who had been watching and filming me nearby. They heckled me, called out ‘Black Lives Matter’ and ‘boyfriends of Instagram.’ I felt threatened, quickly thanked the worker for his efforts, and left. The thought of publishing that photo never crossed my mind.”

Moriarty-McLaughlin contends that, since she was wearing a mask, she could only be identified because the video included a close-up of her father’s license plate as they drove away, which a “malicious social media mob” quickly used to dox her.

“The social media mob posted my name, home address, phone number, and more,” she writes. “Within hours, my social media accounts were bombarded. Threats engulfed my feeds, telling me to kill myself or that I would be killed. Harassers said they knew where I lived and they were coming to get me.”

Moriarty-McLaughlin notes that even LeBron James and Pink piled on and that the College Fix, which had sponsored her Examiner internship, canceled it on the first day, when #FireFiona began to trend and “the Examiner’s social media platforms were overrun with spite and slander directed at me.”

In the last three weeks, Moriarty-McLaughlin continues, “the harassment has not stopped. I’m still receiving threats by text, phone, and direct message. And hateful YouTube videos targeted me for being a conservative journalist. In addition, fake accounts impersonating me and spewing hate speech have popped up online. I’ve reported these accounts as violating the online community guidelines but they haven’t been taken down. This will further damage my reputation and put me at risk.”

In the end, she says, “All I wanted to do was record and recognize the work and back-breaking labor of individuals many take for granted who helped restore Los Angeles. But I stepped unwittingly into an online cesspool of sanctimony, false narratives, and clickbait.”

RELATED: Why Did Santa Monica Police Focus on Protesters Instead of Looters?