Home Uncategorized Finding a Home and a Muse in L.A. 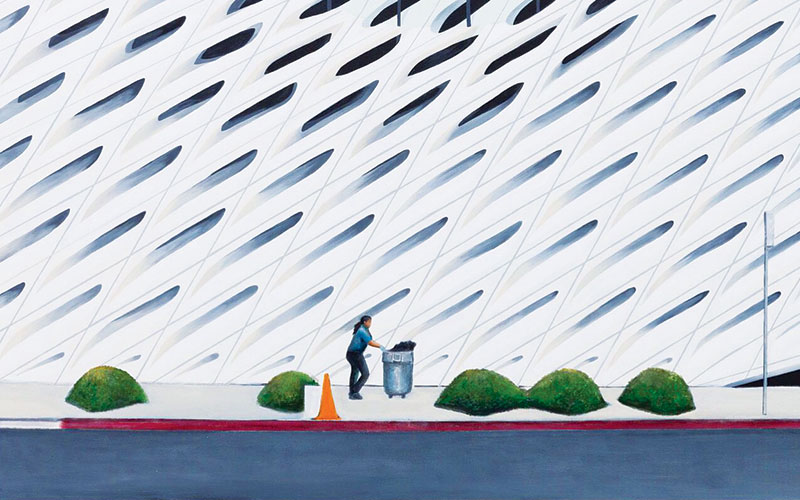 Growing up in Thailand, Yangchareon was moved by film. “My dad owned a theater, so I watched westerns and heard soundtracks without censorship. I preferred American music and American movies. I was exposed to Los Angeles in the movies, so I loved Los Angeles.” The work of painter Richard Diebenkorn turned Yangchareon on to landscapes. “I went to LACMA and saw his Ocean Park series. It was a big, volcanic eruption in me.   I started emulating him, and then I started painting my L.A.: my sea, my own apartment.” Yangchareon’s acrylic-on-canvas pieces, like Under First Street (above), are painted from photographs. “That’s the view from Glendale Boulevard. I’d set myself up to be stuck at that red light. To me it’s beautiful—when I eavesdrop in the gallery, I want people to say, ‘He lives here.’ ”

Gomez was a nanny in Beverly Hills when he first thought to insert domestic help into his David Hockney-inspired acrylic paintings. “The family I lived with exposed me to an L.A. that I’d only seen through movies and the work of David Hockney. It was obvious to me that his work was missing something, and that’s what led me to the reinterpretations.” His mom, formerly an undocumented Mexican immigrant, was his muse for The Broad (above). “She has worked as a janitor for the past 15 years; I focused on housekeepers to begin with because they reminded me of my mother.” For Gomez, this piece has the power to shift attitudes—if the Broad would display it. “The Broad’s selfie culture is an example of how art is de-empowered. Art needs to reflect the times. The conceptual goal of this piece is to be inside the space, but the Broad passed. The Hammer passed—they said they didn’t want to ruffle Eli’s feathers. I could choose to send work that isn’t going to ruffle feathers, but I chose to step on a fault line.”

RELATED: The Path to Citizenship

Fried, whose mother was a Holocaust survivor, grew up in Vienna but never identified as Austrian. “My parents raised me to not belong anywhere. My mother took me to cultural events, so that was what I belonged to.” She discovered her diorama-like medium after her mother was diagnosed with dementia. “I went to Vienna to visit and started filling memory boxes with stuff I found in her house. I felt like, ‘This is it!’ Assemblages allow me to re-create the rooms I grew up in.” Greta (above) is one of Fried’s first forays into L.A.-focused art. “My parents would close alcohol bottles with sculpture heads of Clark Gable and Marilyn Monroe, but the only one in my mom’s apartment was Greta Garbo. I felt, ‘This is America: movie stars and naked women.’ ”