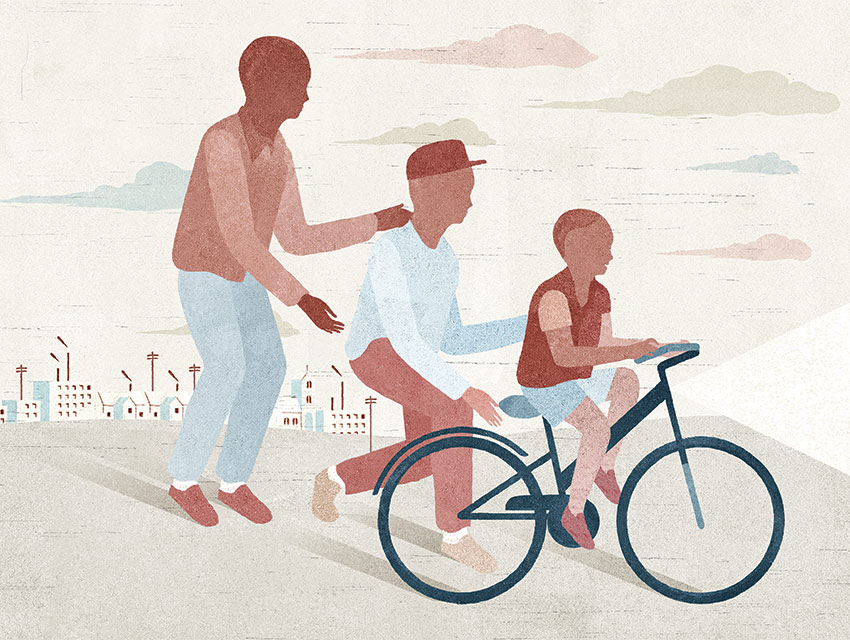 I meet them originally on the page: Big Mike and Andre, Sy and Elementary, Tiny and the twins, Ronald and Donald, and Sugarbear. They are the anchoring figures in a new book by Jorja Leap, Project Fatherhood, the story of a group formed in 2010 in the Jordan Downs housing project in South L.A. The low-slung complex of 700 units has long been notorious as the turf of the Grape Street Crips. A professor of social welfare at UCLA and a gang expert, Leap is a new friend of mine, one of those fiery, fearless women who move through this city—in her case, through one of its most beleaguered parts—intending to improve lives, to shift the tone. The aim of the program was simple, is simple: to teach men how to shepherd the children they have put on the earth, to keep them safe and whole.

These are the tough guys, the former gang members and ex-cons, the walking wounded of Watts—who did plenty of their own wounding in turn, literal and otherwise. In their thirties and forties now, they are looking at those coming after and trying to determine how to keep the kids from doing what they did. This is not a massive government program. This is a group of battle-scarred and hopeful men meeting week after week in a small community center, where they get a quick dinner and a bottle of water and let their hair down—for some, their dreads—and talk about how to nurture, love, and guide the next generation, “Everyone interviewed—whatever their color, their criminal past, their prison record (or ‘jacket’)—expressed dreams and anxieties about the children they had left behind,” Leap writes in the book. “And when they spoke, so many of these men would painfully wonder: How can I be a father when I never had one? ”

That question hangs over the group when I join them on a balmy evening for one of their gatherings. The cast of characters is there. I feel I know them. Big Mike Cummings is a soft-spoken former gang member and drug dealer who now works as a tow-truck driver and all-around activist. You can’t miss Big Mike. He is the natural leader of the group, along with Leap and Andre Christian, the third founding member. A warm, flirty guy, Andre was virtually homeless by age 12 when the Crips swept him up. He has a daughter and four stepchildren whom he tried to learn to parent as he bounced in and out of criminal activities. He was shot multiple times. Finally free of his old allegiances, he helps other lost men find their way. “If we are going to stop this cycle of violence and people being locked up, this is where it’s going to happen,” he tells me. “It’s about the fathers being present. We’re losing too many of our kids to prisons and the graveyard.”

These men are not just focusing on their own progeny. They are dedicated to fathering any young male they can reach. While we are there, guys drift by the open door and look in. You can sense the energy radiating toward them—Mike and Andre and Sy and Sugarbear wanting to lure them in, put an arm around them, tell them to remain in school and away from the gangs. A few Jordan High basketball players enter and sit in the back with their coach. Big Mike asks them to stand up and introduce themselves. They are shy, lanky, filled with hoop dreams that are hard to listen to when you know the odds against those wishes being fulfilled. The tallest, a senior, says he is about to be a father. “Your baby is going to depend on you,” Big Mike says. “Keep your grades up.” Leap follows the young man out when he leaves to ask for his phone number so contact won’t be lost.

There is an urgency in the room that’s palpable. The streets seem to be calling again, the siren song of violence. Crime is on the rise around the city—the first significant uptick in more than a decade—and it made a homicidal reappearance here in Jordan Downs in March when a man walked onto the grounds and opened fire. He wounded three people and killed one, the only person to be murdered in the development in nearly four years. It has clearly disturbed the peace in a major way.

Along with the jump in tension and violence has come another specter almost as disturbing: a return to the earlier method of policing. Many of us remember the bad old days when the cops seemed like an occupying force, certainly in the poorer neighborhoods. After the 1992 riots, there was a determined shift away from that mentality and toward a more community-based approach. The men in the room speak to that, to how things improved—a remarkable period, as they see it. Now they are worried as the LAPD sends officers into areas like theirs who are not the traditional beat cops—men and women who are strangers, who don’t know the lay of the land and how to defuse things and who might prove volatile.

Of course what hangs heavy in the room are the stories of the unarmed black men across the country who have been killed by cops or wanna-be cops, going back to Trayvon Martin, gunned down by George Zimmerman in 2012. The names are spoken out loud: Eric Garner, Michael Brown, Freddie Gray, and here at home, Ezell Ford, who was shot on a South L.A. sidewalk last August 11. There seems to be a new case somewhere almost every week. Anger ricochets. I expect four-letter-word ire, but there is none, at least not at this meeting; the men are decorous, polite with one another. The mood is something more considered, a sense of “there but for the grace of God go I.” Underneath that is an agitated sadness, the concern shared by these men that after all the intense work and soul-searching, they won’t be able to discharge one of the sacred responsibilities of fatherhood, that of protecting the young. They are ready—psychically, emotionally, and spiritually—to be the fathers they did not have, the fathers they meant to be, steady and loving and wise, but they fear that events could conspire to keep them from their finest, redemptive hour.

They are not bailing. It took them a long, hard time to arrive here, and they are staying. The next order of business is a Jordan Downs town hall to talk about the police and how to handle the behavioral shift. I am struck by their one-day-at-a-time patience and pragmatism. I have had a good night with them and with my gutsy friend, Jorjaleap, as the men call her, running her first and last names together. Driving home I feel lucky, as I often do, for the profession I chose years earlier—and to have had this column, which has allowed me to move about the city and meet people like these and write about them. What a good time I have had, the native daughter casting her eyeballs on the ever-morphing metropolis she has always called home. Now, with my last Open City, it is time for me to call it quits before I run out of energy or enthusiasm for the job—though never for Los Angeles, which I have no intention of leaving.

I wanted to close here in Watts. It is one of the city’s conscience spots and, for me, a place of personal connection. My late husband, journalist Karl Fleming, was almost killed covering the 1966 uprising that followed the 1965 riots when he was bashed in the head by a protester. His response: “If I was a young black man growing up on the streets of Watts, seeing what they have seen and going through what they went through to survive, I might feel like hitting some white guy in the head, too.” Two years later he took me to South L.A. to see Bobby Kennedy, who was campaigning for president. The crowd was unruly with hope, and Karl put a protective arm around me. An 18-year-old college freshman, I watched him muscle his way to the front and collect his quotes, his ears and eyes alive to every detail, and I thought, Yes, this is the work I want to do. This is crazy fun and, if you are lucky, of some import. The Project Fatherhood story hit those marks for me. It seems a fitting and meaningful note on which to end.