Home Uncategorized Final Finish: A Last Day at the Races at Hollywood Park 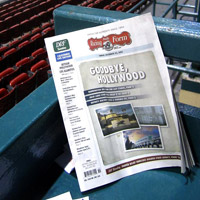 Hollywood Park is a place from another era. For me, it conjures up images of men that look like Jack Klugman in The Odd Couple, and regular guys chomping on cigars as they bitterly toss aside their losing betting slips. For an older generation, it evokes a more romantic vision—William Powel and Myrna Loy dressed to the nines and sipping champagne as they solve a murder between races nine and ten. Younger park visitors made Charles Bukowski the venue’s unofficial poet laureate (the L.A. writer names the park in his work “Hello, Willie Shoemaker”). On December 22, all of that came to an end; Hollywood Park ran its very last race.

A horse track and racing fan, I joined over 13,000 other folks to pay my respects to the ghosts of Seabiscuit, Seattle Slew, and jockey Bill Shoemaker on Sunday, the park’s final day. The crowd was a mix of regulars and first timers.  The first-timers seemed impressed—by everything. The regulars? They grumbled about the long lines, probably wondering where the hell the rest of us where when showing up might have made a difference.

I picked up the Daily Racing Form and walked in just as the National Anthem played over the P.A., performed by Bugler Jay Cohen, who has been working at Hollywood Park for 25 years.  He was the guy who went out before each race and played the same eight-second song, ‘Call to the Post.’ Between the third and fourth race, I watched as he tried to leave the track for a break. He was so mobbed by old friends and fans wanting pictures, he finally gave up and stayed put.

It was a scene I saw replayed over the course of the day. There was a group of middle-aged women in Santa hats who seemed to know every single employee that walked past. There was a well-groomed attendant playing host at the Turf Club, telling stories about celebrities long gone. Even the cook came out from behind the barbecue to videotape the long line of customers, as if they were old friends he hadn’t seen in years.  Elsewhere, retired jockeys signed photos of races they had won decades before, and the bartender greeted grandsons and granddaughters of customers he’d known for years. I’m told some employees will go to work at Santa Anita and Del Mar next season. For others, this was their last day of work and a chance to say goodbye.

If you never visited the park, being inside the main grandstand was like being in a warehouse. There was high industrial ceilings, fluorescent lighting, and video monitors everywhere playing races from tracks across the country. The men and women who spent their days here came to bet, and didn’t have much time for sentiment. Most never bothered going by the track to watch a race. Outside was where you would find the families, couples who were thrilled to let the kids run around while they nursed cold beers and enjoyed the fresh air. The balcony level above is where most first-timers ended up.  Up there there’s no kids, no cigar smoke, and you can—or you could—get a private box with a great view of the track.  Finally, there was the Turf Club, which not only had a $20.00 admission fee, it also had a dress code.

Hollywood Park was given a major face-lift a few years ago in an attempt to lure back the crowds that once filled the stadium, but it still showed it age. Wandering through the grandstand, I noticed rows of empty betting windows and bars that hadn’t been open in years. A little further down most of the lights weren’t even on. Upstairs, the scene was just as sobering. Stacks of dusty furniture and yellow caution tape closed off entire rooms. There were people exploring just as I was, taking pictures and looking for souvenirs. More than once I witnessed someone with a screwdriver taking down a sign or a small fixture and tucking it under an arm. When the eleventh race was coming up I headed back towards the party, and leaving that end of the grandstand to its ghosts.

Over the course of the day, retired jockeys and trainers were interviewed and vintage clips of old races were shown on the monitors, but the nicest touch was the music.  Before each race, a song reflecting the mood of the day played. Sometimes the choices were tongue-in-cheek, like “It’s the End of the World” by R.E.M. More often they were bittersweet. As I headed back towards the track, Willie Nelson’s somber voice echoed off the empty walls.

By 5:30 p.m. about half the crowd had called it quits.  Those who had stayed were ready to celebrate.  Some bet on every horse of the last race so they’d have a winning ticket no matter what. Bugler Jay Cohen played a medley of “Auld Lang Syne” and “Hooray for Hollywood.”  Then long-time announcer Vic Stauffer announced it was Post Time and the crowd erupted into applause. As the horses walked out onto the turf, a recording of Etta James’ “At Last” rang out. I don’t think there was a dry eye in the house.

Valley Lass won the very first race at Hollywood Park back on June 10th, 1938.  On Sunday, Woodsmans Luck won the very last race in a photo finish. The announcer thanked us for coming and that was it. They played one last song as everyone headed out to their cars: “Happy Trails,” by Roy Rogers and Dale Evans.