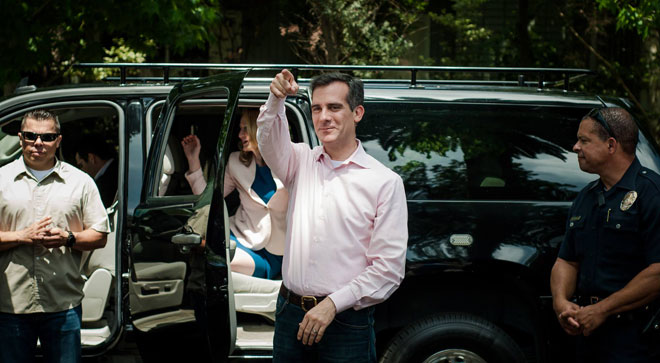 The managers who head up L.A.’s 35 city agencies might not have had to run for election this year, but that doesn’t mean they’ll necessarily get to keep their titles. Mayor Eric Garcetti, who has been in office less than two weeks, formally asked the executives overseeing the libraries, park, airports, and other departments to “reapply” for their jobs at a meeting yesterday. According to Ana Guerrero, Garcetti’s Chief of Staff, each manager was asked to put together a memo outlining his/her accomplishments and long-term vision, and to detail how that vision connects to Garcetti’s priorities. “There was some anxiety coming into the meeting by some of the general managers,” she said, “but I think that once Mayor Garcetti spoke to them and laid out his vision for public service they all walked away excited about an opportunity to take their work to the next level.” Guerrero says staffing decisions will be made on a case-by-case basis moving forward. “We’ll be spending some time one-on-one with each of the general managers after they submit their memos,” she said. “That’s the substantive work of being a mayor, of being a manager, and of making L.A. an even greater city.”