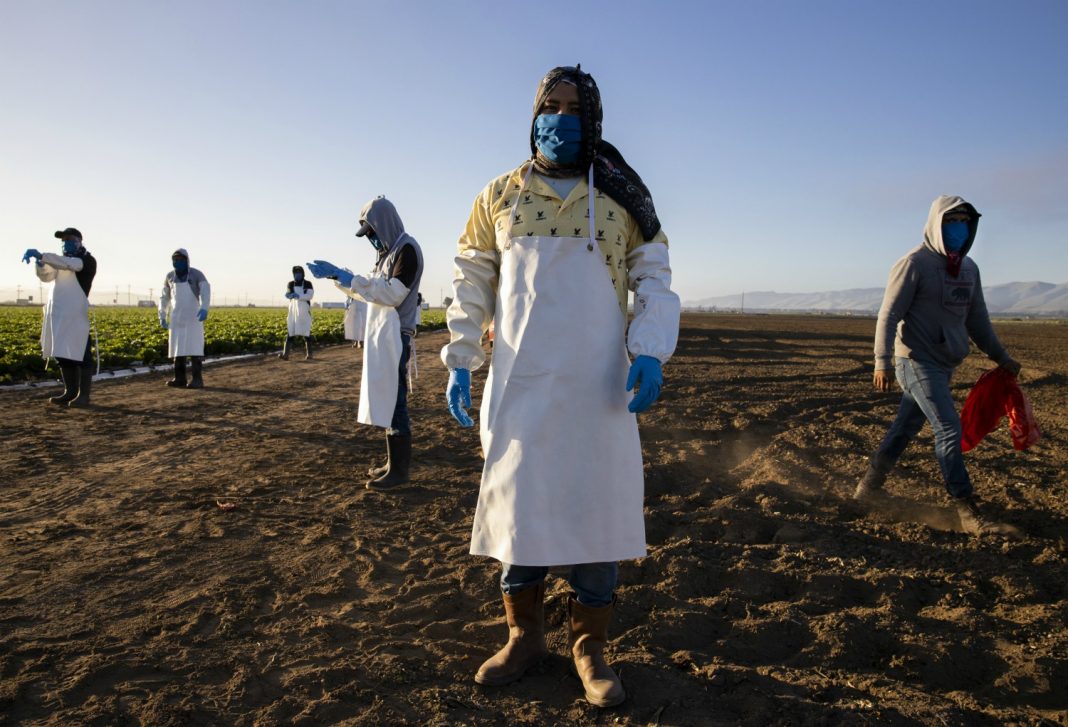 Thanks to poor working conditions, meager access to healthcare, government inaction, and a host of other prejudicial slights, California’s agricultural workers are at a much higher risk of contracting the coronavirus than the rest of the population.

A July report from the California Institute for Rural Studies warned that in Monterey County alone farmworkers were “more than three times as likely to become infected by the virus than persons employed in the county’s non-agricultural industries.”

CIRS founder, Don Villarejo, said at the time that “a lack of transparency,” in which most counties fail to track the disease by occupation, was helping it spread.

In Imperial County, home to hundreds of thousands of acres of harvested farmland, the per-capita case rate is the highest in the state, with 5,930 cases per 100,000 people, according to CDC data.

Advocates say that state efforts to inform farmworkers about the spread of the disease—including Governor Gavin Newsom’s plan to spend $52 million in the region—have failed. Esther Bejarano of the Comite Civico del Valle (Civic Committee of the Valley), told Inside Climate News, “There’s no point spending more money on what’s not working. We need structural change. We need systemic support.”

Carlos Marentes, founder of the Border Agricultural Workers Project, also criticized the state’s response to the crisis. “We are entering a large health crisis and there is no one with the moral authority within the government to define a clear strategy that makes sense,” he told Politico. “Recommendations are made, but not mandates. And the most affected are those in poverty, agricultural workers and rural areas.”

And while the state’s efforts to control the pandemic among farmworkers may be lackluster, many say the Trump administration has made no effort at all, pointing out that it has repeatedly declined to impose mandatory safety requirements for agricultural workplaces. It has also failed to set aside any funds to help farmers obtain personal protective gear for their laborers, although it’s done that for other essential workers such as nurses and police officers.

After months of requests from advocates, the CDC finally issued safety recommendations to farmworkers in June, but the Labor Department declined to make them mandatory, while the Occupational Health and Safety Administration claimed in court in August that it had no authority to do so.

Andy Slavitt, former acting administrator of the Centers for Medicare and Medicaid Services under President Barack Obama, said he worries that most voters are completely isolated from the people who grow and harvest their food, the majority of which are Latino.

“My fear is that we are going to approach the point where the majority of people who are getting new coronavirus cases and the majority of deaths are the Hispanic and Black community,” he told Politico. “It’s not acceptable to decide who we want to save and who we don’t. When Trump says a lot of the country is fine, what he’s really saying is there aren’t as many white people dying.”

Even at the local level, efforts to slow to pandemic’s growth have been thwarted. When coronavirus cases began to surge in the agricultural hub of the San Joaquin Valley this summer, Stockton Mayor Michael Tubbs suggested requiring citizens to wear masks.

“Stay in your lane,” was the response from county emergency services director Shellie Lima. “I am against the proposed mask ordinance for Stockton… Why would our elected officials feel that they have the medical understanding to do so?”

“Maybe they don’t think it’s serious, maybe the people who are most likely impacted are not a priority for them, or maybe it’s just a lack of understanding of the science,” Tubbs told the Los Angeles Times. “We keep treating it like this wasn’t avoidable. It was.”

In Monterey County’s Salinas Valley—known as the “Salad Bowl of the World”—workers are now facing an even hire risk due to the raging wildfires.

Dr. Caroline Kennedy, medical director of the Clinic Services Bureau at the Monterey County Health Department, says that workers report being unable to take a deep breath or perform heavy labor even weeks after being diagnosed with the virus because of the smoke.

“Often, they go back to very congested living situations and everyone in the family is infected,” she told NPR Monday.

But, Kennedy says, choosing between health and money is a hard call in this widely impoverished community. “Do you stay home when the air quality doesn’t make you feel well, or do you just go back to work?”

RELATED: Farm Workers Are Still in the Fields as the Pandemic Spreads

Support L.A. journalism. Sign up for your subscription to Los Angeles today.