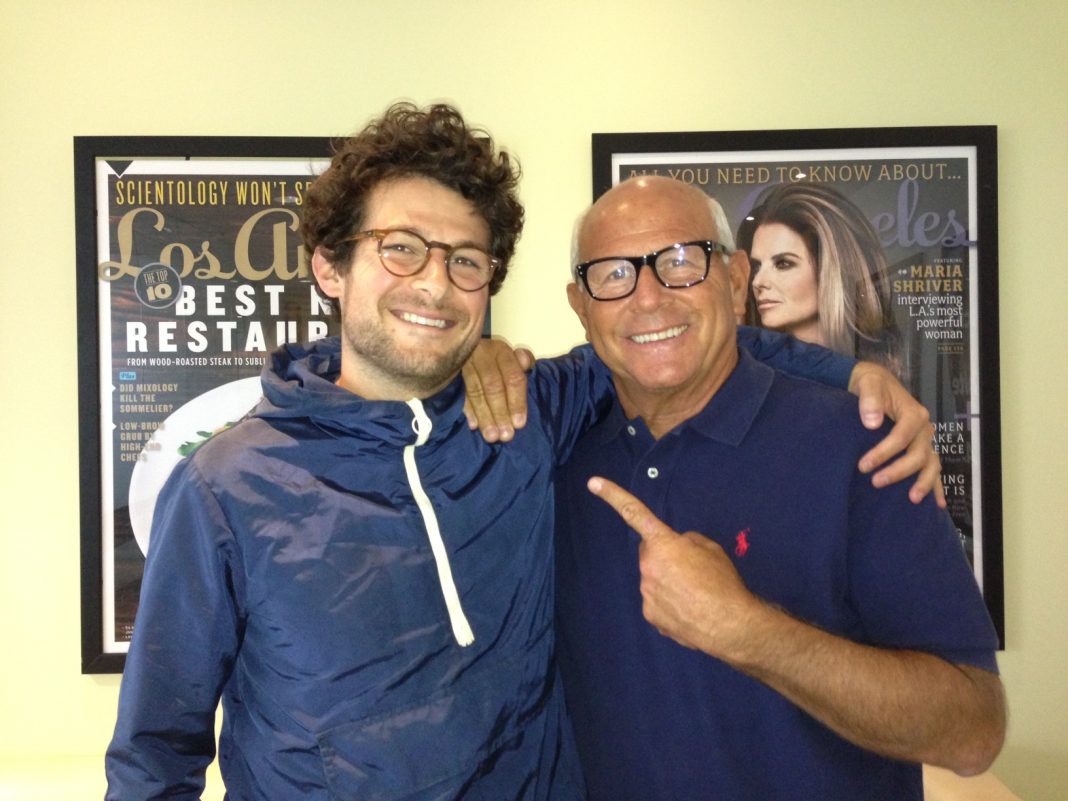 Is there a gene for civic mindedness? If so, it runs in the Soboroff family. Steve Soboroff is chairman of the Weingart Foundation, the former CEO of Playa Vista, and a one-time mayoral candidate who advised the California Science Center on its project to bring the Endeavour space shuttle to L.A. His son Jacob is a HuffPost Live host and producer with a TED Active talk on voter turnout under his belt.

With Father’s Day approaching, they sat down for a discussion about the election of Eric Garcetti, the potential for power in L.A., what the city needs now, and fatherhood

SS: Happy Father’s Day. You know, I think it’s going to be a lot harder for you to be a dad than it was for me, because of the environment now in Los Angeles. My advice would be, don’t even think about quality time. Think about quantity time.

JS: You just want me to have kids.

SS: Seriously. People today are so tight with their schedules they think they can schedule things in, and you can’t schedule quality time with kids. It’s also much easier now to just stay within your five-mile circle. In Los Angeles that’s a crime for a parent to do with their kids—unless they are underserved.

JS: That’s true. I think my siblings and I love L.A. so much because as we were growing up, you were working in city government and we had the privilege of being able to leave our home on the Westside and go down to Watts and hang out at [community organizer] Sweet Alice Harris’ house or to see where you grew up in Woodland Hills, or go down to San Pedro or Boyle Heights. Too many people don’t see the city in its entirety, and that’s why so many people judge it so wrong.

SS: People count the times on one hand they cross the San Diego Freeway. And it’s wrong.

JS: Part of why people don’t have more civic pride in Los Angeles is they don’t think of how L.A. is connected nationally with other cities. On HuffPost Live I’ve tried to focus on local stories to get people to understand how we impact people across the country. Janice Hahn came on and talked about how the strike at the port could potentially affect not just the U.S. economy but the global economy. Joe Buscaino came on to talk about how putting pocket parks in communities to get rid of sex offenders may actually do more harm than good. There are so many things that go on in Los Angeles that are impactful outside of the city, but I don’t think enough people think about that. When Eric Garcetti came on I said, are you going to use drones with the LAPD? He said he didn’t want to rule it out. He talked about medical marijuana, too.

SS: I think he’s the future of Los Angeles. Now with a guy like Mike Bonin, the council is young, progressive, and open to things.

SS: What does that mean?

SS: Oh. That’s cool. But what’s interesting is his whole life has been grazing. He has spent his life looking at different parts of public service, at different ways of helping people. He is one big diverse human being. Now he can start to go deep, and I think together with the progressive council, he’ll find ways to take care of the problems that L.A. is facing.

JS: One thing we don’t have in L.A. is customer service. When I worked for Mayor Bloomberg in New York, they set up the 311 system. It’s extraordinary. For the most part, people turn to it when they need something. Here in L.A. the 311 system is a joke.

SS: Unless it can get you reservations at a pizza place, no one will use it.

JS: Half the time the thing doesn’t work. But what I think about Eric Garcetti that’s interesting is he has already done this. When he was a city councilman I directly tweeted him to tell him the stairs between Sunset and Micheltorena had a ton of graffiti. He tweeted me right back and said call my office. I made the call and within a week the graffiti was cleaned up. The question is, Will he be able to do that on a city level? The technology that we have today is going to go a long way—you just have to be careful that the digital divide doesn’t separate the rich and the poor. But knowing there are things you can do on your own to fix L.A. right away would give Angelenos a stronger tie to the city. SS: It is definitely possible for people to get and feel involved here. We flew Endeavour over L.A. because we wanted everybody to see it. The proudest moment of the project was the walk through South L.A. There were a million-and-a-half people in the very place where the Watts Riots happened and not one arrest in 33 hours. The pride rose above it. You have to remember this is a relatively new city and people just don’t talk politics here. If you get in a Taxi cab in Chicago or New York or Tel Aviv you’ll think you’re sitting with someone who should be doing a news show. We don’t have that dialogue. Hopefully through the kind of stuff that you do Jacob and that Garcetti will do, it will become a part of the consciousness. It’s a quality of life issue, and in this election the turnout was pathetic. It’s a shonda for the people of L.A.

JS: And yet, we have a pretty progressive voting system here. You can be a permanent absentee voter, you can vote early if you want—it might help voter turnout if we had elections during the presidential election years, but really there is no excuse. I think people think the mayor and the city council don’t make that much of an impact.

SS: Oh it’s much harder to be the mayor here than it is in New York or Chicago. The power here is in the city council.

JS: That’s why I think the mayor of L.A. needs to speak up on national issues. It gives the mayor bigger stature to talk about drones, to say we don’t want surveillance of people with license plate readers. These are big-time issues for people who care about civil liberties. I’m not mad at Mayor Villaraigosa for going to Washington so much.

SS: You’re talking about the power of personality, the power of persuasion, the power of political thinking. I think that the number one thing Los Angeles needs to improve is for all city employees treated equally. Because different city employees are represented by different labor unions, some people make two or three times what other city employees make. That has to stop. We are not going to be a great city when everybody only thinks about himself. Garcetti is in a unique position because of his victory against all the big money. Hopefully he can bring about some equity. But overall, there’s so much about L.A. that is encouraging. We are in the early stages of people thinking that taking mass transportation is OK. I’m really optimistic.

JS: I think L.A. is becoming a city where young people want to come live and work—and in fields other than the entertainment industry.

SS: People use to say, ‘Come to the beach or don’t come.’ Now the restaurants are great. The clubs are great—

JS: You go to the clubs?

SS: What? No! But I’m listing reasons why people should come here. It’s no longer just ‘go to the beach.’

JS: I agree. That’s why I moved back here.

SS: That’s wonderful. I don’t think people have been proud of L.A. for a long time. If people think L.A. is something to be proud of, that could be our savior—if we don’t screw it up.