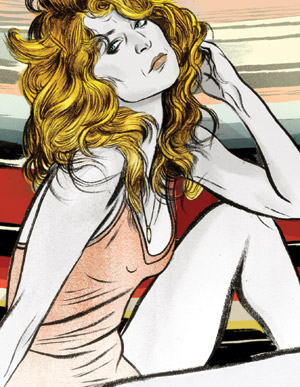 Hollywood is rife with cautionary tales about the star or starlet who grabbed the brass ring, held on for a while, then slid into addiction and self-parody. Few slides have been more disturbing—and somehow touching—than that of Farrah Fawcett. Throughout her long struggle with anal cancer she has stared out at us from magazine pages and our computer screens looking haggard, all cheekbones and the residue of what appears to be not-so-good face work. It is hard to stare at that face and hard not to, our eyes searching for the once-luminous poster girl. The cancer is one thing. That can happen to anybody, and the toll is wrenching. The added detail in Fawcett’s case is the trouble with her only child, Redmond O’Neal, her son with longtime partner Ryan O’Neal. As his mother lay in the hospital this spring, Redmond was arrested outside Pitchess Detention Center in Castaic for possession of narcotics—drugs he was allegedly taking to someone on the inside. Although his battle with addiction had been public, his timing seemed especially cruel and, for the gossipmongers, irresistible. Whenever I turned on my computer, Fawcett’s ravaged face popped up on AOL. She was the “It” girl of the 1970s, her mid-decade swimsuit poster selling a yet-unmatched 12 million copies. With her full mane and flawless teeth (this was before perfect white smiles became ubiquitous), she exuded a healthy, bouncy sexuality—a kind of prom queen beauty. There was nothing edgy or confrontational in her appeal. She was the counter-counterculture princess at a time when the Vietnam War was finally ending, our soldiers dragging themselves home to a spent and conflicted country. She was, in effect, the restitution of the wholesome all-American girl after the angry, raggedy years, a contrast to the wan, druggy rock and roll babes and the women’s libbers who refused to shave their legs. Fawcett was a rebuke to them all. She radiated sunshine, milk, sweetness, with just enough sensuality to stir the envy of young women who wanted to be like her (certainly to have her hair, as millions tried to do) and the hormones of young men who wanted to possess her.

With Charlie’s Angels, which debuted in 1976, Fawcett consolidated her kittenish hold on the country’s imagination. She was with the show only one season, but she remains the iconic Angel, the one we think of first, last, and always, the child-voiced blond who cooed her boss’s name with girly flirtatiousness: “Charlie.” She was the ideal crime fighter, pretty and charming but tough enough to get the bad guys, a new female archetype—part mascara, part machismo—that persists. We may be liberated, but we are also cuddly. Apparently—or so say colleagues who interviewed her back when—Fawcett was genuinely sweet, a simple, down-home Texas girl who wandered into celebrityland, unpretentious and unprepared, and rode the wave to massive stardom. She caught that wave at the right instant, at the beginning of our obsession with fame—People was launched in 1974—that now consumes the culture. She might well be the first exemplar of celebrity with a capital C, someone who is anointed because she captures the moment, someone who becomes famous for being famous, a creature of the camera. Paparazzi, reporters, the prying phalanx of this new world order—suddenly they were everywhere, and Fawcett obliged, flashing that smile, tossing those locks. She had enough self-awareness to play to us, play with us, play with her own image, going on to pose in a bathing suit for the April 1977 cover of this very magazine, in a daring position, on all fours—more lion than kitten, if you will—a picture that became her second-biggest-selling poster.

If Fawcett was image savvy, she was also damaged enough to take up with one of the town’s major bully boys, Ryan O’Neal, and their romance became fodder for the tabloid industry. That was a large part of the cultural shift, the ultimate erasure of the line between public and private. It wasn’t enough to preen; there had to be a hook, a reason the public was invested in your story—the messier the better. Fawcett and O’Neal complied. Strikingly handsome as a couple when they got together (in 1982, Fawcett left her husband, actor Lee Majors, for O’Neal, the preppy Adonis of Love Story), they would garner headlines in the years ahead for a host of ugly family sorrows, up to and including their son’s recent arrest. Ryan O’Neal has his own history of drugs and violence. Earlier this year he pleaded guilty to felony possession of methamphetamines. Then there were the assaults on his son from an earlier marriage, Griffin O’Neal, one in 2007 and one in 1983, when he hit him hard enough to knock out two of his teeth. In 1987, Griffin was found guilty of reckless boating in an accident that took the life of Gian-Carlo Coppola, son of director Francis Ford Coppola. Then, of course, there is Tatum O’Neal, his daughter from his first marriage, with her own long, well-chronicled addiction struggles.

What misery. What a family. Where was our lovely poster girl in all this? Were Fawcett not so tied up in our cultural affections, she might have come in for more pointed criticism of her maternal abilities or lack thereof. Instead, the continuing drama around her has only made her own story seem that much sadder, made her seem ever more like the victim in the middle of a familial frat house. No wonder the best acting she did was playing victims: a battered wife in the 1984 TV movie The Burning Bed and a rape victim who turns on her rapist in the stage and film versions of Extremities. She handled those roles convincingly, almost unnervingly so. No question, part of her appeal has been the Marilyn effect, a breathy vulnerability, a need to be protected that touches both genders. Fawcett doesn’t have the dimension of Monroe, the unbridled sexuality, the voluptuous sadness. Hers is a small-screen tragedy.

In a 1997 appearance on the Late Show with David Letterman, she was a spaced-out, aging sex symbol who couldn’t track at all. She rambled and giggled, behavior that led to suspicions she herself was a user or abuser of some substance or another. That same year she was featured in Playboy at age 50, one of those stops on the way down for beautiful women of iffy talent who still feel it necessary to strut their stuff. One can imagine the lure for Fawcett. Such a shot launched her; this was another grab at the brass ring. Again, if we didn’t bear her lingering goodwill, the photo-stunt might have struck many of us as pathetic, unseemly, silly.

The arc of such a life has one last stop: reality TV. Fawcett tried it first in 2005 with a short-lived series called Chasing Farrah, and her cancer treatments, from the traditional to the unconventional, were filmed for an NBC documentary called A Wing and a Prayer. Fawcett said at the time she owed it to others who are battling the disease, but clearly there is the need to stay in the game, stay in the camera’s glare. People who have lived much of their lives in public find it hard to step away from the limelight—especially when encouraged to stay in it by a TV network happy to oblige. The impulse is to go on posing, even when you are in your sixties and fighting cancer and your son is in jail, yesterday’s angel still courting our attention right to the end.