Home Uncategorized Eye on the Prize 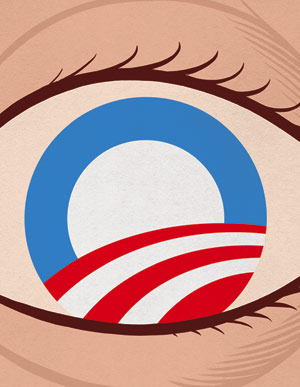 So we are given another chance to savor the extraordinary and unlikely ascension of Barack Obama as he is inaugurated president of the United States on January 20. Since his speech in Grant Park, when he reduced many of us to tears—there watching and in living rooms and dorm rooms all over the country, all over the world—it has been too easy to minimize the memory of that night.

Such a serious man Obama turns out to be, his radiant smile occasionally leavening his public appearances over the past weeks—a steely, self-possessed politician getting ready to run the country. He takes the reins, as we all know, at a most perilous point: with houses being foreclosed—thousands here in California—people losing their jobs, state and local governments juggling huge debts, the Taliban ever more frisky, Russian president Medvedev, Putin’s stand-in, ever more challenging. Yet we want again, for one shiny moment, just to gape in awe at the gifted orator and his delicious family, imagining those girls gamboling through the White House with their new puppy. Come on, let me feel it again, that rush of excitement, the sense that by electing this man we had a small part in making history and redressing it at the same time. I have kept the newspapers from November 5 under my desk. I peek at them from time to time, at the blaring front-page headlines—“Obama,” “It’s Obama”—just to feel the jolt again, corny as that might sound.

Maybe the feeling isn’t so corny. We are going to have to infuse the next months with a determined optimism and a belief this young president can lead us out of the wilderness. All around me, people I know and love are firing people or being fired. The ripples of disaster are widening. Yet there is a strange absence of anger about the fiscal madness that got us here—those miserably clever mortgages that, sliced and diced and bundled, have brought not just the U.S. economy but the global economy to its knees.

Obama has not toyed with our anger; the rage game was played by the other side, to losing effect, with McCain’s pit bull, Sarah Palin, wandering the working-class byways trying to roil resentment among the Joe Six-Packs and their gals against the educated elite. The ploy failed, in large part because while Obama is unquestionably part of that elite, he is also black and was raised by a single mom, and in larger part because it was McCain’s party that had wrought much of the mess. When he accused Obama of being socialist, the label came off like a joke, given that the federal government, with Bush at the helm, had swallowed a major chunk of the American financial system by buying into banks and bailing out insurance companies.

The Republican attempt to divide and conquer didn’t resonate for a bigger reason: People were tired of divisiveness, of being set against one another, weary to the bone of it, especially as the economy worsened and fear heightened. Obama intuitively understood that weariness. His biography is a refutation of easy categories, through which and over which and under which he has nimbly maneuvered his entire life. White and black, inner-city and Ivy League, cool and Christian, he is, as he said jokingly at his first postelection press conference, “a mutt.” He wasn’t so much postracial, as some suggested in a bit of wishful thinking (one black presidential candidate—or black president, for that matter—does not a color-blind country make), as multiracial. That is why he so appealed to the young, who have grown up skating across state and national and international borders with the click of a mouse. Obama’s campaign was on their wavelength from the start. There were Web sites and e-mails and text mes-sages and videos, a nonstop surge of them, which made the old media look passé.

Obama also made his contenders, first Hillary Clinton—with an overheated Bill Clinton at her side—and then John McCain, look passé. Hillary was gallant in her struggle, McCain downright grumpy. They repre-sented an earlier spin of the planet, when partisan elbowing was the way to get to the top. Obama no doubt frustrated both by refusing to go mean even when supporters urged him to do so. As it happened, he didn’t need to—not only didn’t need to, shouldn’t have had to—and he knew that. All the bickering, all the verbal pushing and shoving—leave that to the other guys, the other ticket. Let them look small-minded. Barack Obama was cut from a different cloth—more visionary, more hopeful—and his ongoing promise to the rest of us was (and is) that we, as citizens, can follow his example.

That’s the biggest piece of the story, how he redeemed the civic space by filling it with exhortatory words and ambitious ideas. No longer was it the arena for sniping or for a word-challenged president who talked with cowboy swagger about hunting people down. President Clinton had the speechifying gift, but with his own unruly appetites he also tarnished the public space, cheapened it. Just to see him out there campaigning for his wife, fairly frothing with indignation at the eloquent upstart who was about to get the presidential nod, was to be reminded, in equal measure, of both his gifts and his flaws—and of the complicated marriage that for so long had been the national soap opera or perhaps its Shakespearean tragedy. How restful, how cheering, to see the Obamas smile at each other in that private way deeply married people sometimes do, as if they have a secret no one else shares, even with the whole world watching.

Gone, gone, gone—the Clintons and their long dance, John McCain and his long war. We have our first post-boomer and, I would venture, post-celebrity president. Of course, Obama is a celebrity (the charge that McCain leveled at him), no doubt the most famous person on earth. But in the sense we have come to use the word, the Paris Hilton sense—to mean someone who is famous without substantial content—he is not that. When he got rock star-like on his mid-campaign European swing, he made a correction, as if he recognized he had tiptoed into celebrityland, where he did not belong, as if he had sent his image onto the world stage before people knew the measure of the man. Now they do, or think they do, and when he won the election, they took to the streets to celebrate—not just the Europeans but people in Asia and Africa, too.

More stirring than watching Obama in victory on election night were those pictures from around the globe. We have been living in a wildly unpopular country—unpopular not just with enemies but also with friends—and this has weighed on us, grating against America’s image of itself as a country of goodness, of hope, to use Obama’s word. His election, and the international response, allowed us to raise our heads a bit again, to push from memory, for example, those pictures of Abu Ghraib. That is not my country; my country doesn’t do that. Our country is better. Our country just elected a black president. Oh my.

Now comes the gritty part: running a country that’s in a financial trough. The sweet exhilaration might not last much past the moment Barack Obama puts his hand on the Bible and takes the oath of office. I am keeping my November 5 newspapers under the desk just in case, so I can glance at them from time to time and remember what that night felt like.