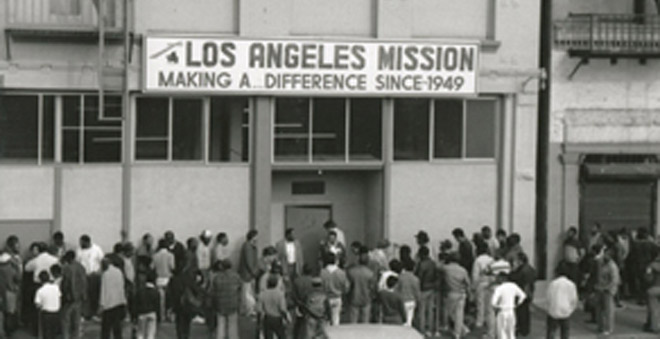 The Los Angeles Mission is a non-profitthat serves the needs of homeless men, women, and children.

It’s the season of giving and Bridgespan Group, a Boston-based consulting firm backed in part by the Bill and Melinda Gates Foundation, is encouraging people to do just that with the launch this week of its new pro-philanthropy Web site, GiveSmart. The site, which feature video clips of more than 50 “remarkable givers,” (think actor Michael J. Fox and Tudor Investment Corp. founder Paul Tudor Jones) sharing personal stories and advice on donating money, aims to encourage social change nationwide.

Will it work? And while we are on the subject of giving back, which local non-profits need help most now? John E. Kobara, executive VP and COO of the California Community Foundation, which offers donor services, fills us in:

Over the past year, the Occupy Movement and the political campaigns for the presidential election drew a line between nation’s wealthiest people and everyone else. But in reality, the one-percent has incredible power to help people with lesser means. Has the upper class gotten a bad rep?
I think they’ve taken their hits. For a long period of time there have been people that are very wealthy and generous and people that are very wealthy and not as generous. What changed the conversation a number of years ago was The Giving Pledge, which invited billionaires to commit to giving half their wealth. That is the kind of movement that shows people are willing to really commit to charitable giving and to use their wealth in ways that are productive for society.

When the economy collapsed in 2008, people became very careful about how they spent and saved their money, and philanthropies took a hit. Now that the economy is recovering, are people opening their wallets for charity again?
There’s a perception that giving to non-profits has gone down, but when you look at the overall numbers—which mask a lot of things—individual giving is really back at the same level it was in 2007.

People who are closer to breaking even in their lives, yeah, their charitable giving has shrunk a bit, but the big picture has been pretty consistent. When you look at the national statistic for charitable giving, it’s been around $300 billion for six years, I think.  Now the average non-profit will say, No, John, we’re getting fewer dollars. That’s the case because of changes in how people are giving. But overall, it’s only been a slight downturn.

There was a study done last year that asked people, what is wealth to you? For those that don’t give, it was $7.5 million in net worth. For those that do give it was $1.75 million. So people who are giving don’t need as much, and people who don’t give need more. And that has always been the case.

On one level, GiveSmart seems to be trying to appeal to people’s desire to be part of an exclusive club—if these 64 ultrawealthy people are giving to charity I should too. Will it work?
I think it will have an influence. The bottom line of GiveSmart thinking is the notion that once you know what you want to do with your money, giving gets really interesting. The idea of understanding yourself and connecting that understanding to giving is very powerful. The GiveSmart models are impactful because they are engaged in their giving. And as those faces become increasingly diverse and representative of all of America, it could really make a difference. Leading by example is very powerful.

How would you describe L.A.’s attitude towards giving now?
L.A. is undercapitalized in every way and it’s a complicated place. It’s a messy place. It’s hard to understand who needs help. National funders, even our own local donors, don’t give as much locally as they could because it’s a tough landscape to figure out. People say they want to give to another continent or another part of the country, but we have those needs here. Helping people understand that is a challenge.

What we’re seeing in L.A. though is higher-level donors giving smaller amounts, but the same or a greater number of gifts. In other words, the number of charitable transactions taking place is higher but the dollar amounts are slightly lower. There’s also been a more-than-subtle shift towards giving to basic needs, things like food banks, workforce development, scholarships—things directly impacting an individual as opposed to things like universities or religious institutions.

What kinds of local causes are people giving to most?
Between UCLA and USC there are 800 development officers and together they raise around almost a billion dollars a year. Hospitals and major institutions are also just really good at fundraising. The big art institutions are, too. Donors give to those things, and there are reasons to give to them. There are ego issues at play, sure, but there are also opportunities and a lot of potential there.

Which causes are most dire in Los Angeles?
It’s the state of affairs of the country, exacerbated. In the study that we did we found that just under 40% of households in L.A. County have negative or zero net worth. That shows the depth of poverty. There are tremendous needs in the community.

At last count, L.A. had just fewer than 40,000 non-profits. When you remove the educational institutions, religious institutions, hospitals and medical centers, you have 37,000 left. Those non-profits cover a gamut that’s hard to imagine, and that’s typical of L.A; there’s no other place that has so much of anything, non-profits included. But those 37,000 are small, so they might not have a development officer but they are doing really interesting things, things that we depend on. Those are the non-profits that are highly underfunded and at risk today.

Why don’t more people who can afford to give to charity do so?
In neighborhoods where more than 40% of the people are wealthy, giving goes dramatically down. We can name a lot of places in L.A. that are like that, but in every area of the country this is true. Our analysis and anecdotal evidence suggests that it is because the needs of those communities aren’t very visible. In many cases, people who aren’t giving haven’t connected with a need. I really believe it’s about disconnection. When someone gets sick, family members get interested in that disease whether they are rich or poor. New immigrants are more likely to give to scholarships, often because someone helped them get an education. So things happen in people’s lives that trigger interest.

Where’s a good place to start for people looking to donate for the first time?
The kitchen table is the best place to start. The answers are within you. I sat with a donor recently who said, ‘John, put a good list of who I should give to together.’ I asked him a whole bunch of questions, and then when he looked at the list he said, ‘Wow, what a great list.’ But it wasn’t my list, it was his list. It’s also important to try to get a tactile connection to a cause. California Community Foundation often takes donors by the hand to the place they are thinking of giving to, and then they go, ‘Oh this is how I could help.’

You know, there’s a great quote: “We have to comfort the afflicted and we have to afflict the comfortable.” Get a little uncomfortable with the things you are interested in. That’s much better than making a simple transaction.