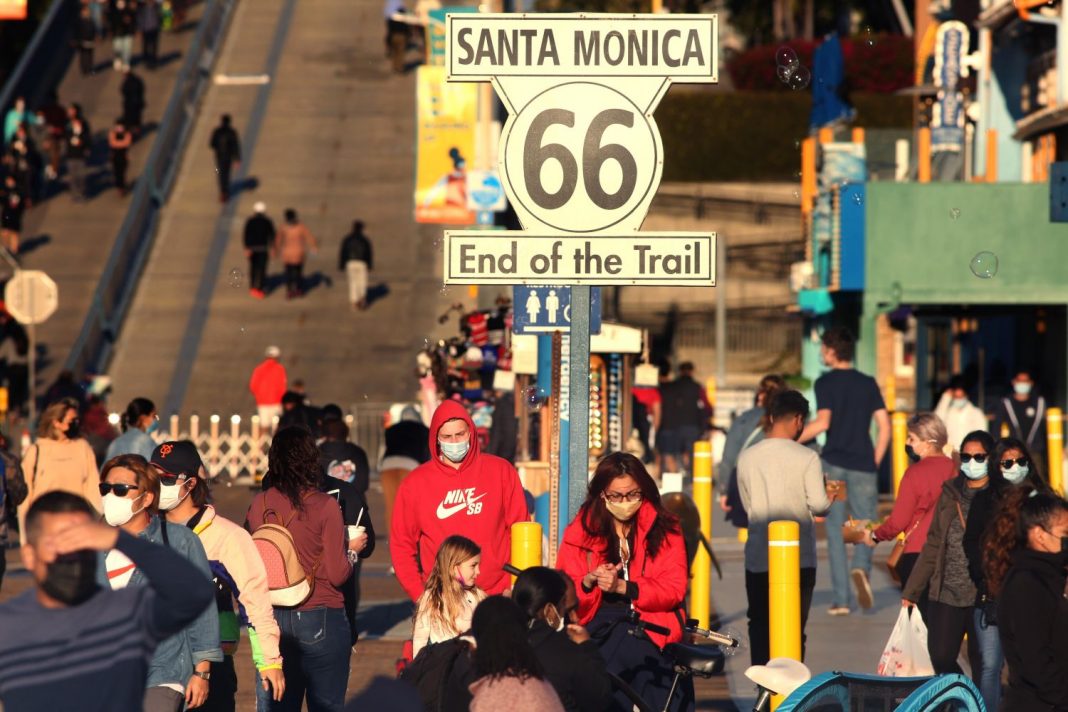 Personal responsibility–or, more accurately, the lack of it–has played an enormous role in the spread of COVID-19. We’ve seen a Thanksgiving bump that appears to track directly to individuals disregarding guidance to avoid gatherings, and all signs point to another even more dangerous wave associated with December celebrations. People are continuing to put themselves and their communities at risk.

Nonetheless, while reckless socializing represents an extremely important part of the explanation for the surge in COVID-19 cases and hospitalizations being experienced in Los Angeles, it’s not the entire story. Demographics, economics, environment, and public policy are also at play.

Wearing a mask and isolating whenever possible are the most powerful things we can do to stop the spread, but these four contributing factors shouldn’t be overlooked.

When some people talk about how “safe” an activity is during the pandemic–shopping at the mall, eating on a restaurant patio–they think first about how likely that commercial activity is to infect an individual customer. And if the interactions are brief or outdoors, especially under pre-surge conditions, the answer may be that the customer faced a level of risk with which they were reasonably comfortable. The risk calculus for an establishment’s staff, however, is very different.

“Worker protections and safe workplaces are an essential part of slowing the spread of COIVD-19 and protecting the health of our communities,” Dr. Barbara Ferrer of L.A. County Public Health said in September.

Her office released a statement regarding the “significant potential for transmission” at workplaces and the importance of employers adhering to all appropriate protocols.

Servers, cashiers, and store associates interact with hundreds of different people each day. Agricultural workers toil shoulder-to-shoulder with their colleagues, and may lack access to sanitation in the fields. Warehouse and factory workers and factory are confined to indoor environments with minimal distancing and, in some cases, minimal enforcement of safety protocols by management. Health care workers–a population of more than 2.4 million residents of California–are, of course, often directly exposed.

Early in the pandemic, outbreaks at restaurants and factories caused alarm; as additional workplace categories resumed in-person operations in the latter portion of 2020, on-site outbreaks at workplaces steadily increased, and those hotspots have become one significant explanation for the surge.

The L.A. County Department of Public Health currently lists 511 active outbreaks at workplaces. That accounts only for commercial settings that are not schools, homeless shelters, health care facilities, jails, or related categories–though certainly those institutions are also themselves workplaces. The workplace outbreaks figure only accounts for places where the data has been volunteered, and where there have been epidemiologically linked cases within a 14-day period, which is to say there are likely others that fly below the radar of the county’s list–some because a restaurant or office chooses to close after just one or two employee infections, some because the employer has not reported the full extent of the problem.

Many of the places that are seeing outbreaks are those that employ essential workers who don’t have the option to work from home. Locations of stores including Costco, Trader Joe’s, Target, and CVS all currently have hotspots. So do banks, food processing facilities, police departments, bakeries, car dealerships, and shipping operations.

Even workplaces that may not spring to mind as public facing in the same way have been beset by outbreaks. Film and television productions at Warner Brothers, NBC, Netflix, and CBS have all reported hotspots, accounting for dozens of cast and crew members. Other productions have reportedly voluntarily paused after just a single person on set tests positive.

Nearly 10,000 individuals in the county are linked just to active, listed workplace outbreaks. Those people infected while on the job may then interact with strangers at work, or with their own family members at home.

It stands to reason that, even with the best protocols, if you become infected with COVID-19, the people you live with are likely to contract the virus as well. Ideally, a sick person would isolate themselves entirely, not sharing space or facilities with healthy people, but for many, that’s not practical.

Los Angeles is one of the most densely populated cities in the country, with an estimated 7,000 people living in every urbanized square mile (Manhattan, by comparison, has just 5,239).

U.S. Census data lists the average household size in the county at just under three people, but that number climbs near or over four in areas like San Fernando, which have been particularly ravaged by the pandemic, and those numbers may be an undercount as immigrant and vulnerable communities have historically been underrepresented in the Census. Those numbers are considerably higher than the national average household size of 2.53, and dramatically higher than cities like Washington D.C. and Cleveland, Ohio, where the number is just 2.29.

Those larger household sizes naturally mean more people are likely to be infected by a single sick person in the home.

Household sizes are larger in Los Angeles for a number of reasons, but among them is the cost of housing. The average rent on an apartment in L.A. is $2,375 and the average sale price of a home is $715,000. Those numbers are significantly higher than national averages, in themselves–but even more crucially, housing accounts for an outsize share of income in L.A. compared to other major cities. And that was before the pandemic rendered thousands of people without income at all.

“Living in crowded housing conditions can create stress in the home and have negative consequences for its inhabitants,” wrote sociologist Claudia Solari in a paper published in the journal Social Science Research.

Solari focused her study on data collected by the Los Angeles Family and Neighborhood Survey, noting that the city has “atypically high levels of crowding” in homes. She noted that people living in packed houses, particularly children living in those conditions “have a higher probability of catching illnesses.”

Lots of people have moved during the pandemic, too, Pew Research data indicates, and most of them are moving into homes with more people. Many younger adults moved back in with parents, people sought roommate situations to ride out the isolation in a pod, and people who lost jobs and could no longer afford their own homes moved in with friends and relatives. Be it for affordability or personal reasons, the risk associated with packed homes is part of why we have a surge.

“We’re the densest metro area in the United States. But we’re also seeing the household spread now,” Mayor Garcetti said in an interview on Face the Nation. “One person is coming home—an essential worker—there might be five, seven, 10 people in that household.”

When experts shared predictions that the pandemic would grow worse during the winter, some in warmer climates like Southern California thought that the milder winter weather here would somehow spare them. That misunderstanding–and the careless actions people took because of it–may have had dire consequences.

“The effect of weather is low and other features such as mobility have more impact than weather,” University of Texas professor Dev Niyogi wrote in a study of the possible link between temperature and COVID-19 published in November. “In terms of relative importance, weather is one of the last parameters.”

The reasons for concern about the virus spreading more aggressively in winter were always linked more to people spending more time indoors, where the virus is most likely to hop from person to person.

Some research has also suggested that dryness and darkness–things which Southern California winters do offer–may be favorable to SARS-CoV-2. Indoor dryness, which many in our region experience, is linked to increased infections, in part because the mucus membranes of the body dry out and are no longer able to perform their protective function.

Pollution and wildfires, too, are likely part of why we see the current surge. A CDC advisory released in October noted that exposure to wildfire smoke and other air pollution can “irritate the lungs, cause inflammation, alter immune function, and increase susceptibility to respiratory infections, likely including COVID-19.”

A historically bad fire season, which stretched well into December, has left many in the region suffering long-term health consequences that make them especially vulnerable. General air pollution in Los Angeles exceeded World Health Organization target levels on 67 percent of days in 2020 and smog reached the worst levels observed in decades.

In a study released last month, a team of researchers from UCLA’s Fielding School of Public Health attempted to determine which groups within California were most at risk for COVID-19 infection. What they found corroborated numerous other stories and reports: that infection rates are higher among Black and Latino populations. A national study by the CDC indicates that a Black or Latino person is three times more likely to contract COVID-19 than a white person who lives in their same area.

Los Angeles County is predominantly Latino, with 48.6 percent of residents identifying as such in 2019 data. Nine percent are Black, and 15.4 percent are Asian, another group with heightened infection rates.

To compound the problem, people of color have historically experienced significant disparities in what the CDC terms “social determinants of health”–factors like the environmental quality of the neighborhood where an individual lives or their income and level of education–and racial bias in access to and quality of medical care.