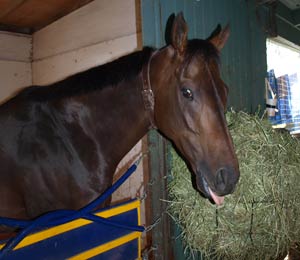 The Breeders’ Cup Classic, which migrates from track to track around the U.S., is the richest weekend in American horse racing. This year the country’s top horseflesh comes to Santa Anita on November 2 and 3 to vie for the $5 million in prize money. We met up with Game On Dude, who qualified for the weekend’s signature race by winning the Hollywood Gold Cup, at his stall at Bob Baffert’s training stables, a horseshoe’s throw from the track. While we snapped he talked. So what’s it like to be you?
Who are you, another paparazzi? Get that camera outta my face. It’s not easy being a celebrity’s horse, I gotta tell you. My guy, Joe Torre, everybody in L.A. thinks they own a piece of him. So they think they own a piece of me. I’m not sure Torre even appreciates how hard I work for him. I mean, how difficult is to get a bunch of guys to stand around a baseball field and swat flies. At least that’s what I hear they do. I not only swat flies—see that long tail, it comes in handy—I’ve got to run like hell down that track. The dirt gets in my eyes, it gets in my nose, my pretty white socks are black by the time I’m done. How are they taking care of you?
Great! No complaints. The hay is tasty—none of that cheap stuff—and you see how I nibble all day. So hygienic, these hay bags. Who wants to eat off the floor? OK, so this is off the record, but you caught me wearing my collar. I gotta bad habit. I’m a cribber. I grab onto that cable across my doorway and suck air as hard as I can. They say it’s from boredom, but I tell you it’s a rush. Try it. I also had a hard time putting on weight back in the day. But Bobby’s happy with how I filled out. He thinks it’s why I’m world class. Of course I always knew I wasworld class. Speaking of Baffert, what’s he like?
Love the guy! He’s a regular dude. Grew up on a little ranch in Arizona, been around horses since he could walk. He gets us. That was pretty darn scary last March when we went to Dubai—talk about a long plane ride—for that big deal race and Bobby had a heart attack. I was soooo distracted I couldn’t keep my head in the race. Finished 12th  out of 13. What a bust. Bobby’s OK now. He’s a class act. Wasn’t a bit upset when we got nosed out in the Breeders’ Cup at Churchill Downs last year. That Drosselmeyer,  I mean dude, he came out of nowhere! The peeps were having a good laugh over that one. My rider, Chantal Sutherland, had been dating D’s jockey Mike Smith and had dumped him on reality TV. Did Smith have the last laugh or what? You had to feel for him too, losing the Breeders’ Cup by a hair on Zenyatta—talk about a hot mare. But I digress. When you meet Bobby, don’t forget to compliment him about his mane. It’s a beaut. And ask him to show you Bode Miller’s horse. Do you know he named his kid after that skier dude? I just hope the Romneys don’t have their eye on me. That dressage stuff. It’s for dopes.