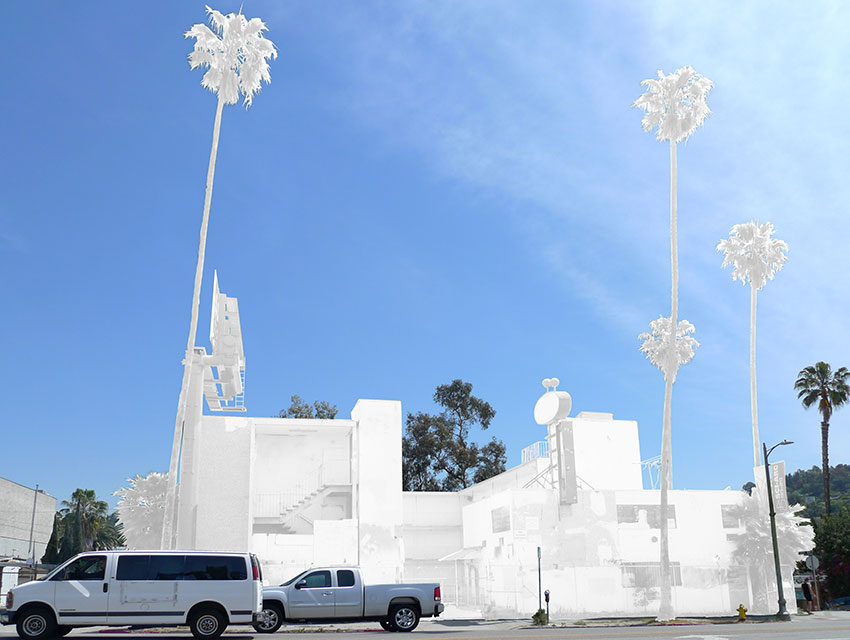 The so-called Bates Motel—a deserted Silver Lake building that was once the Sunset Pacific Motel and is now set to be demolished—will have one last existence yet. French artist Vincent Lamouroux announced plans to drench the structure, its billboard, and the palm trees that flank its sides in white limewash for Projection, a temporary art installation about the ephemerality of L.A. architecture, culture, and history. As the ecologically-safe limewash wares off, the project will serve as a metaphor for the evolution of the neighborhood that surrounds it.

Lamouroux, who lives in Paris but has visited the Silver Lake area and watched it change for years, says he first conceived of using the Sunset Pacific Motel building for an installation more than a decade ago. “It’s time and site-specific,” he tells us of Projection. And it’s experiential, too, as people will be able to watch the artist cover the structure in white from morning until early afternoon beginning on April 20; painting will be completed on April 26, and a public opening event will be held from 3 to 8 p.m. that day. Psycho, he says of the movie associated with the motel’s moniker, “is some sort of nightmare, and I’m trying to produce something more like a dream”—something that’s both there and not, like a ghost. The paint itself, he says, “has strange aspects about it.” Lamouroux can’t say for certain how much limewash will be needed to achieve the visual impact he’s after, but he expects it to be “a lot.”

Nicolas Libert, co-proprietor of downtown art collective Please Do Not Enter, which helped facilitate the project, expects the final product to be as meaningful as it is eye-catching. “This reality of the Silver Lake neighborhood and this iconic motel’s story—Vincent’s idea is about catching this transition,” he says. “It’s about catching this special moment when everything is about to change. That’s why it’s such a powerful installation, it deals with the transformation of Los Angeles.”

But not everything about the project will be ephemeral. According to a release about Projection, the installation process and completed work will be documented and studied by several local arts education programs.