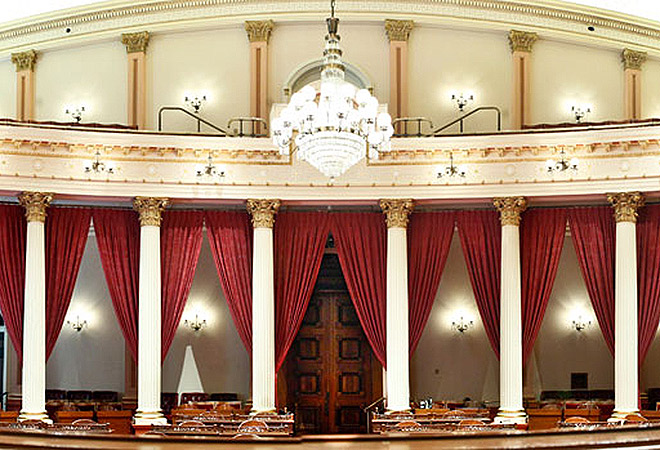 Imagine this: You’re a California state senator, and a businessman with a position on a pending tax bill invites you to a one-on-one dinner and picks up the tab. What are you ethically allowed to talk about at dinner?

These were just some of the questions that were brought up at the state senate meeting on Wednesday. Instead of conducting business as usual, conversation took a moral turn when Senate President Pro Tem Darrell Steinberg canceled hearings and told lawmakers, their top aides, and other members of staff to attend a mandatory two-hour seminar to thrash out the importance of principled behavior.

“We do this every two years to understand where the lines are that we can and can’t cross, and when we willingly walk into the political arena and take the oath of office, we understand that we’re held to a higher standard,” Senate Republican Leader Bob Huff said. “And that’s the way it should be. We should have the confidence and trust in our public officials knowing that they’re looking out for our own best interest, not their best interests.”

The “ethics refresher course” comes after the recent removal of three senators: Ron Calderon (D-Montebello), who allegedly accepted more than $60,000 in bribes; Roderick Wright (D-Los Angeles), who was convicted of perjury; and, perhaps the most startling of the three, gun advocate Leland Yee (D-San Francisco), who has been charged with trafficking the very guns he was trying to regulate. All three of them are pleading not guilty and are still receiving full pay.

The seminar focused on presenting hypothetical scenarios, most of which the senators had personally dealt with, from how and when to take campaign funding to whether or not senators could accept free items like basketball tickets. The thrust of the symposium was to open the floor for discussion, because in a state where it can cost millions of dollars to run for office, the ethical answer isn’t always black and white. But if this meeting proved anything, it’s that breaking the ethical code can result in some serious backtracking for everyone.

“Protecting the institution of the senate is first and foremost in both of our minds and this is not a partisan issue nor should it be framed that way, because it affects us all,” Huff said. “We get painted with the same broad brush of integrity when members struggle and lapse.”