Home Business Fear and Loathing at Erewhon, the High-Margin Grocery Store That Might Just... 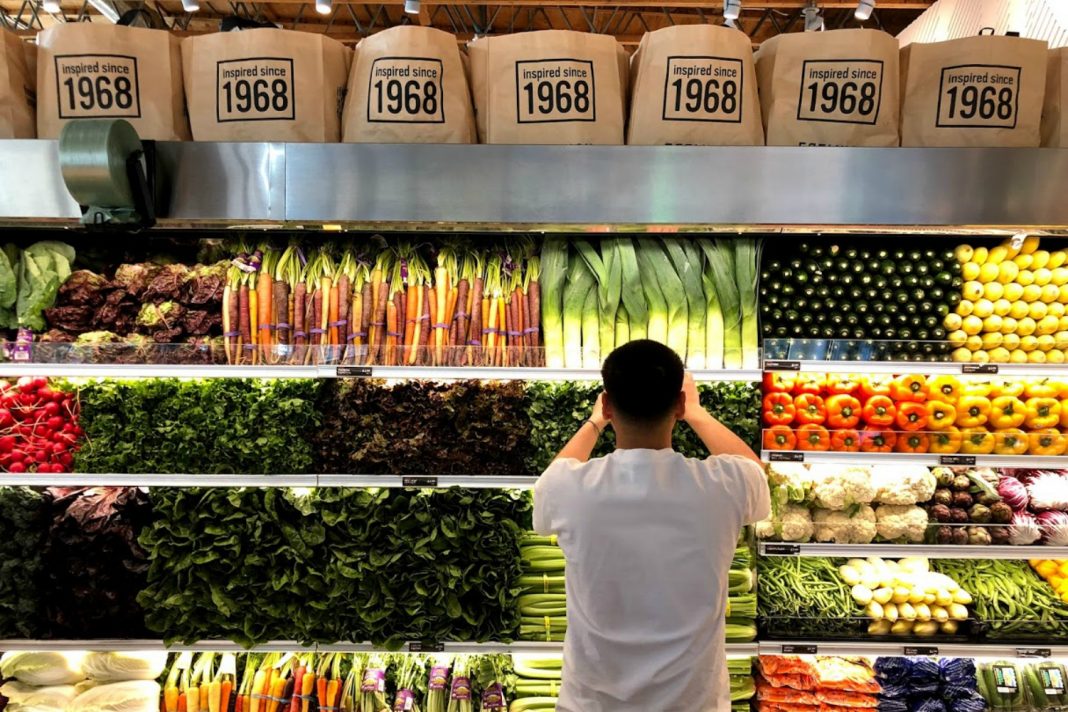 On a recent Thursday afternoon, a crowd of ripped men in sweats and twiggy women in yoga athleisure swarm around a hot food bar that’s teeming with yams and brussels sprouts. The members of this well-moisturized crew have taken numbers from a dispenser but don’t seem perturbed by the long wait. After all, this is the kind of surreal social scene you might encounter at an influencer’s dinner party.

Erewhon, a natural foods grocer based in L.A., has inspired cult-like devotion among those who can afford to pay four dollars for an avocado. On Instagram, a torrent of celebrities can be seen pushing bags of Erewhon produce to their Escalades, while beaming earth mother types with names like “healthjunky” cradle the chain’s green beverages. The store has even inspired a line of merch.

It’s not hard to understand the appeal: visiting the Southland health food chain—known for its $24 macadamia nut cheese, kelp noodles, and bone broth shots—is like stepping foot on an alien planet. While Amazon struggles to cut costs at competitor Whole Foods, Erewhon is operating a very different strategy: charge as much as consumers will pay for hyper-obscure, top-of-the-line products that destabilize your idea of what food even is. So far, the model seems to be working. Soon, the chain will open new stores in Silver Lake and Studio City, adding to a portfolio that already includes Santa Monica, Fairfax, Venice, Calabasas, and Pacific Palisades (in other words, places where people have money).

The store’s beginnings, though, are surprisingly humble. Founded in April 1966 by Japanese immigrants Aveline and Michio Kushi, Erewhon started out as a diminutive, wood-paneled retail store in Boston selling macrobiotic and natural foods. By 1968, the business was importing foods from Japan and, by the following year, it had become the first natural foods wholesale and distribution company in the U.S.

According to the book The History of Erewhon, Kushi’s goal was world peace. “People would eat better, they’d be healthy. Being healthy, they’d think better. Thinking better, they would realize that war made no sense,” is how he described it. Today, that mission still draws droves of upscale shoppers to Erewhon’s sliding glass doors.

If you want to ogle some truly out-there delicacies, it’s best to head to the refrigerated section; that’s where you’ll find the aforementioned nut cheeses, the $20 homemade soups, the collagen sparkling tea (“best served chill—just like you”), and the $9.50 cold-pressed celery juice whose green, fibrous contents settle at the bottom of the recyclable glass jar, forming a little bucolic hillside.

Here, refrigerated “bread” products like Barely Bread and Unbuns seem as if they’re apologizing for their bread-y nature. (They’re actually made with concoctions of egg whites.) Both cost significantly more than regular Wonder Bread, or even Dave’s Killer Bread, but VP of new store development Jason Widener claims customers are getting a good deal when you compare today’s prices to those when the chain first opened its doors.

“In the beginning, the company was so in rapture with health and wellness, that they’d get cashews from some exotic place and you’d end up spending 20-some dollars for a bag of nuts,” Widener says. “But I’d still buy a bag because I wanted to learn about it, and I felt better when I ate ‘em.” The supermarket-as-classroom ethos even influences Erewhon’s physical layout: the grocer builds shelves that are too tall so that customers will be forced to ask for assistance, thus building a relationship with salespeople.

Widener is a little defensive about Erewhon’s prices. His attitude seems to be, yeah, healthy food is expensive. And by healthy, he means biodynamically farmed on land where the flax-seed-filled chicken shit enriches the soil, which makes the crops more nutrient-dense, which makes the food “like medicine.”

He uses the store’s eggs as an example. “I’m telling you, those eggs from Apricot Lane are worth every penny. I mean, if you saw these chickens, they’re eating on this farm that’s like literally the most pristine land you could imagine. The yolks are like health bombs when you’re eating something from such a pure source.”

Not all of Erewhon’s health claims stand up to scrutiny. Case in point: the store stocks reams of supplements for adrenal fatigue despite the fact that it’s not a medically recognized condition. The benefits of celery juice haven’t been proven, either.

Mike Pearl, a local journalist and author, claims to have seen the dark side of the gourmet grocer. When he worked at VICE’s offices in Venice, he says the grocer installed a high-powered exhaust system that blew “particulates and smoke away from their wood fire grill right into the air intake in my building.”

The irony—that a health food store was negatively impacting his health—didn’t escape him. “They wanted to sell, I suppose, wood fired pizzas and smoky grilled meat and vegetables with that barbecue aroma, but to do so they were blowing huge quantities of hydrocarbons right into my face, basically all day.”

Still, he would occasionally buy lunch there, especially after figuring out how to scam the salad bar. “If you don’t put dressing directly on your salad, you can get a salad for four bucks and pay 50 cents flat for a cup of dressing, instead of shelling out $10.” So scientific was his scam that one year, on 4/20, he eyeballed exactly how much he could put in it to pay $4.20… and it worked.

During my own visit, I was asked three times if I needed any help while standing on the personal hygiene aisle, perhaps a sign of something. This was the section of the store that seemed most geared towards influencers; I think it’d be hard to justify spending $23.99 on a CBD epsom soak unless I was trying to snag a sponsor. (Just to torture myself, I spent 20 minutes staring at the labels anyway.)

At the checkout I stood behind multiple women who had each bought a single item and suddenly understood the allure of this place: like me, many of its shoppers were living in their own tiny apartments and making this pilgrimage as much for the food as the communal learning experience. The store makes you feel like a Californian at the vanguard of kooky food trends—the kind that might not have much mainstream leverage today but will likely end up in a cereal box in five years. Maybe someday there will be a medical consensus regarding the effectiveness of Ashwagandha root, and you’ll have stuck it in your mouth first.

Update: This post was updated to correctly reflect Jason Widener’s job title and to include Santa Monica in the brand’s current list of locations.