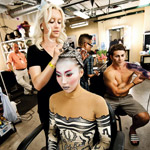 Cirque du Soleil’s Iris, the entertainment troupe’s ode to moviemaking, is already drawing large audiences to the Kodak Theatre in Hollywood, but for anyone who has yet to check out the 72 performers, 200 costumes, 20 video projectors, and 166,000 watts of sound power, there’s no hurry. The show will be running in L.A. for at least ten years. Assuming that the audiences are big enough to earn a profit (anything over 65 percent of capacity each night), Iris could easily become the single greatest economic infusion Hollywood has ever seen. What’s remarkable is that the production took shape during the worst downturn in 80 years—and without studies or commissions or pro forma public hearings. All it required were three well-connected L.A. guys: an entrepreneur, a real estate developer, and a city councilman.

Up until now Hollywood development has been by stutter step. No one would dispute that the place has come a long way over the last half-dozen years, with busloads of tourists congregating on the cement footprints in front of Grauman’s Chinese Theatre, at the nearby Madame Tussauds wax museum, and in front of the El Capitan. Yet even boosters will tell you that away from the main attractions, Hollywood streets still show their seedy side, especially at night. You often just want to get in and get out. “At least Times Square has Broadway and the shows,” says L.A. businessman Gary Shafner. “You come here, you put your foot in the footprint, and you’re done.” The elegant and mostly unused Kodak Theatre has been a glaring example of lost opportunities. Despite being home to the Academy Awards, the theater is ill suited for many concerts and shows—too much verticality and not enough seats. “It doesn’t make economic sense for artists,” says Shafner. “You have Universal and then you have the Greek Theatre, Nokia—you have all these theaters with bigger capacities. Why would I play a 3,400-seat theater when I could play a 5,000-seat theater and earn a lot more money?”

Shafner, who tries to stay under the radar, has contacts who are spread throughout the city. A onetime assistant to rock promoter Bill Graham and former tour manager for Bob Dylan, he is a partner in National Promotion & Advertising, which plasters ads on vacant lots and construction sites. Going back more than a decade, he has contributed almost $30,000 to elected officials, including Mayor Antonio Villaraigosa and 13 of the 14 current city council members. He also happens to be a pal of Shaul Kuba, whose real estate company, CIM Group, owns the Kodak Theatre, Hollywood & Highland, and the adjacent Renaissance Hotel. Shafner has a fondness for Hollywood, and the Kodak in particular (he arranged to hold his wedding there with programs designed in the format of a Playbill and posters announcing the couple’s “Big Fat Kodak Wedding”).

He knew that the place was a loser. Everybody did. “What about having Cirque du Soleil?” Shafner suggested to Kuba, one of his many supersize ideas for the Kodak. With its graceful combination of street gymnastics and circus-style arts, a Cirque show would generate business not only at the theater, but at nearby restaurants, clubs, hotels, and shops. Of course, lots of cities around the world want a permanent Cirque du Soleil show, and most get turned down before the courtship advances very far. “They want to get rid of the riffraff,” says Shafner.

Cirque du Soleil was founded in 1984 when a group of street performers—fire-eaters, mimes, jugglers, and acrobats—banded together in the Quebec town of Baie-Saint-Paul. Originally funded as a nonprofit organization, the company went through several rough financial stretches, and by the fall of 1987, when founder Guy Laliberté had his troupe perform downtown at the Los Angeles Festival, Cirque was close to shutting down. “We literally had no money to put gas in our truck to go home if we failed,” Laliberté recalls. “We said, ‘We live or die in L.A.’ And when I saw movie stars—household names—actually standing in line to buy tickets, I began to think maybe there was a possibility.”

The privately held company has expanded from two traveling shows in 1990 to the current 22, both touring and permanent (a Michael Jackson-themed North American tour launches this month). Ticket sales make up most of the annual revenues, which approach $1 billion, with corporate sponsorships providing a financial cushion. The approach to the shows, performed in more than 300 cities, has remained basically the same from the beginning: promote the production and not the performers (they can be replaced), avoid dialogue so that all audiences can keep up, and seldom include animal acts, which are expensive and often a turnoff. This pairing of ballet and Barnum & Bailey, enhanced over the years with digital effects and lavish art direction, has yet to be successfully imitated. There’s been occasional carping, mostly from would-be competitors, about how the acts are beginning to look alike, and ticket prices, which can run more than $200, are not for the budget conscious. But each night in Las Vegas alone, up to 15,000 people—about 20 percent of them repeat customers—watch O, Mystère, Zumanity,  and four other permanent shows. Cirque du Soleil is a global money machine.

For Kuba the biggest challenge in landing Cirque may have been setting up the first meeting. It took over a year. “I didn’t encourage him. I didn’t want to waste his time,” says Daniel Lamarre, Cirque du Soleil’s chief executive. The company was in the process of opening several permanent shows in Japan, Macau, and Las Vegas, and he wasn’t looking for more. But Kuba called so many times (“It became sort of a joke,” says Shafner) that Lamarre finally agreed to squeeze a half hour in between two meetings in Las Vegas. As Kuba and Shafner made their pitch, Lamarre became intrigued, remembering that Cirque had brought down the house during a four-minute bit at the 2002 Academy Awards. He and Laliberté arranged a second meeting, this time at the Kodak. “It was really Guy who sat in the theater, looked at the sight lines, and saw the possibility of it,” says Shafner.

Unlike Vegas, with its almost constant visitor churn, L.A. is not an obvious Cirque target. No show has been permanently based here (Phantom of the Opera had the longest run, at four-and-a-half years). Also, Cirque shows are pricey to mount, requiring a complement of sophisticated lifts, platform stages, and set pieces. The Kodak’s limited backstage would need to be significantly revamped in order for Cirque to match its production standards in Vegas, which any Hollywood show would inevitably be compared with. “So we said [to Kuba], ‘You work on the backstage part, and we’ll invest in the show itself,’ ” Lamarre told me, sipping a double espresso at the Beverly Hills Hotel. (Shafner says he doesn’t have a stake in the deal.) The cost of the project was $103 million—$51 million from CIM and $52 million from Cirque (shows that require the construction of a theater can run twice that). With eight performances a week, excluding six weeks to prepare for the Academy Awards, Lamarre figured he could sell 700,000 tickets each year. “If we had come with a typical Cirque du Soleil show,” he said, “I don’t know how long we would have lasted. But having the Hollywood theme makes it different.” That theme traces the history of motion pictures, with dance, acrobatics, live video, animation, and filmed sequences.

Cirque didn’t flinch at the up-front costs, but CIM was entering unfamiliar territory. The firm is a real estate giant, with office and retail properties in Mid City, Hollywood, and West Hollywood (along with about a dozen other cities in the United States). But as with any real estate company, business is usually transacted by leveraging assets—that is, buying stuff with other people’s money. In the Cirque deal, CIM was willing to put up $21 million of its own cash, which still left $30 million to borrow. Kuba, who is notoriously press shy and declined repeated requests for an interview, told the Los Angeles Business Journal that private financing fell through because of tight credit markets in 2008.

That’s around the time he contacted another friend, city council president Eric Garcetti. Over the years city agencies have given nearly $100 million worth of loans and subsidies to CIM. With the Cirque deal in the balance, Garcetti’s office came upon a little-used loan guarantee program overseen by the U.S. Department of Housing and Urban Development. The program, known as Section 108, is aimed at perking up low-income communities in cities that receive federally funded Community Development Block Grants (the average household income in the area near the Kodak is less than $35,000 a year). As part of the plan, the city would borrow $30 million and pass it on to CIM. Los Angeles collects $450,000 as a finder’s fee. Having the city serve as an intermediary between HUD and a private entity was permissible but unusual. So was the size of the loan, which ranked as Section 108’s largest in 2010.

At first Los Angeles city councilman Dennis Zine wondered if it was a great idea to put that much money into a single project. A Los Angeles Times editorial questioned whether the city had made its case for what could be risky public investment (“too many assertions and too little evidence”). The loan, however, is virtually risk free for taxpayers: Money comes from private investors who buy federally guaranteed notes that will collect interest. In addition, no project funded under Section 108 has ever gone into default; factoring in a worst-case scenario, the CIM loan would be collateralized with the Hollywood & Highland complex. In the end the city council approved the $30 million loan with no objection.

On the week that previews began, I met Garcetti at a coffeehouse a few blocks from his Silver Lake home and asked him whether any lessons could be drawn from what he and his buddies had done. “Number one is that government has to have a human face,” he said. “If I hadn’t been a part of the mix, I don’t think we could have convinced Cirque to come. Lesson number two is that government works best in tough times. If we take resources that can withstand downturns and that are available when private markets dry up, that’s when we need to step up.” Well, maybe. This might not have been a sweetheart deal (the loan processing was much slower), but it was certainly a relationship deal, and the connections Kuba has cultivated with much of the city council are bound to rub good-government types the wrong way. That’s life in the big city—elected officials always seem a little more willing to help the folks who shell out tens of thousands of dollars in campaign contributions.

But the Cirque du Soleil deal reflects another aspect of L.A. commerce, something that shouldn’t be overlooked in a city that’s considered so business unfriendly: It’s that the benefits of deal making—whatever you think of the effects—can go well beyond the deal makers themselves. Business owners along Hollywood Boulevard believe this single show will be a game changer for years to come. It was the simplest of ideas resulting in, potentially, the biggest of paybacks: Hollywood gets a major attraction, Shaul Kuba gets a long-term tenant, Cirque du Soleil gets another $70 million in revenue each year, and Garcetti gets major political points. And what about Gary Shafner, the guy who came up with the idea in the first place? He wants to open the largest candy store in L.A., only a few steps from the Kodak.