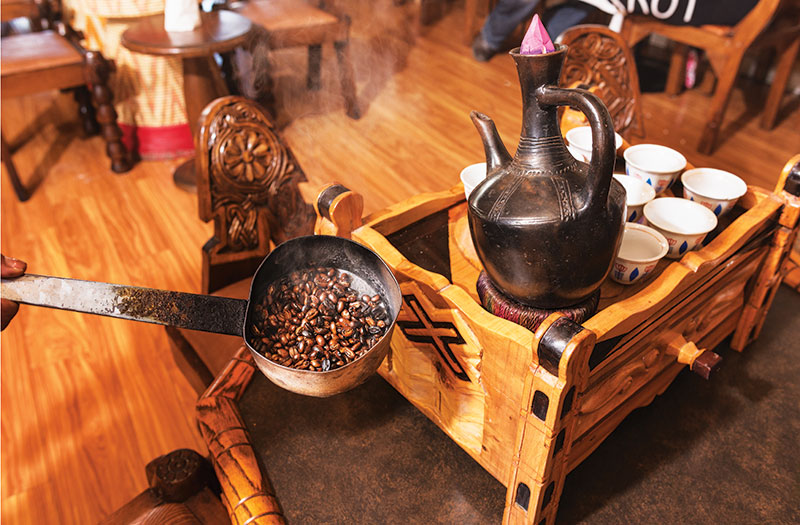 The East African restaurants along Fairfax take their traditional coffee ceremony seriously—with nary a barista or latte in sight. Here’s how it unfolds at Messob.

Step 1: Roast
Green coffee beans are placed in  a small pan and roasted over an open flame. A server brings them to the table, where you can smell the thick white smoke waft ing from the freshly browned beans.

Step 2: Grind
Once the beans have cooled, they’re coarsely ground with an electric grinder. In Ethiopia they’re usually ground in a heavy wood bowl, called a mukecha, with a blunt wood or metal cylinder, known as a zenezena.

Step 3: Brew
The coffee is brewed inside a clay pot, or jebena, which is designed to allow the grounds to settle at the bottom of the container while the coffee steeps. The narrow spout acts  as a sieve to keep most of the grounds out of the cup.

Step 4: Serve
A tray laden with handle-less cups is brought to the table, along with a small vessel for burning incense. The coffee is poured from the jebena in a steady stream until each cup is filled to the brim, and it’s served black.

Step 5: Enjoy
The small batch preparation yields a smooth, strong beverage with no hints of acidity or over roasting.  Sip it slowly while snacking on a combination of peanuts and cooked barley. Safari the Ethiopian Store is obscured by racks of clothes from neighboring vintage outlets, but it’s one of the few spots in Little Ethiopia selling traditional garb from the home country. The 19-year-old shop carries the ankle-length dress known as a habesha kemis, which is typically worn to coffee ceremonies and made of shama (a gauzy cotton) or silk chiffon. The pieces are usually white, gray, or beige and trimmed with symbolic embroidery. Owner Alem Abebe imports each handmade garment from Ethiopia. “African prints are popular right now,” she says. “The weather in L.A. is similar to that in Ethiopia, so the dresses are comfortable in this climate.”