Home Dining Can a Series of 100 Dinners Start a Real Conversation About Race... 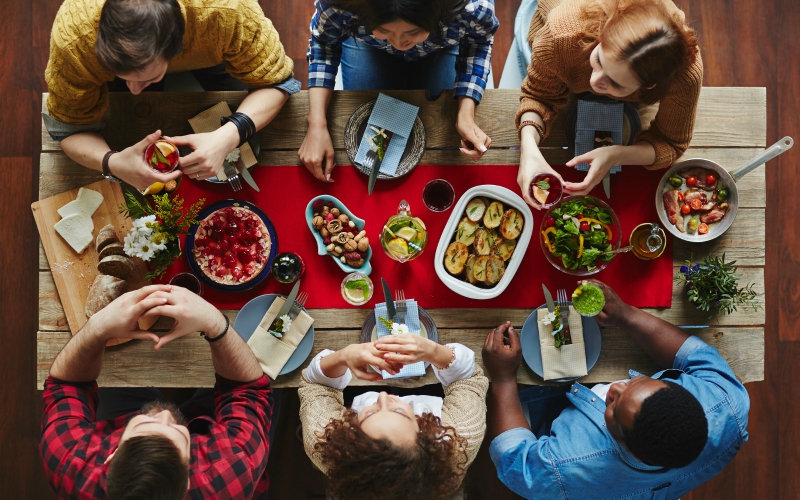 Dinner parties take place every day all over L.A. Even as you read this, some group of acquaintances is breaking bread at a mutual friend’s house and chitchatting about the latest season of one Netflix show or another (OK, maybe not if you’re reading this at, like, 3 in the afternoon). But over the course of four days this month, in 100 homes across L.A., roughly 1,000 strangers will gather for a different kind of dinner party.

From April 16 through 19, a new initiative called EmbRACE L.A. will hold a series of 100 dinners, bringing Angelenos together to share a free meal and stretch the boundaries of what qualifies as polite dinner conversation. At each one, ten people will join a volunteer host and one or more trained facilitators for a catered meal and a guided discussion on race, racism, inequality, and L.A.’s future. Organizers hope the frank dialogue will help build community connections and lead to social, political, and economic policy changes for the city.

L.A. City Council president Herb Wesson launched EmbRACE L.A. with help from Community Coalition, a nonprofit social justice organization based in South L.A. Alberto Retana, Community Coalition’s president and CEO, says, “We wanted to do it in one week not because it’ll be over in a week, but because we really wanted to create a buzz and have an impact. We wanted folks to feel like while the living room is a small, intimate conversation of eight to ten people, they’re participating in a conversation that’s involving a thousand people across the city in a short period of time.”

The alcohol-free dinners—catered by Derrick Lewis of Not Your Mama’s Kitchen, Stacey Whitney of Spoonful of Honey, Gregory Dulan of Dulan’s on Crenshaw, and others—will take place in volunteers’ homes across all of the city’s 15 council districts, and each one will include vegetarian, vegan, dairy-free and gluten-free options. Retana urges anyone who’s up for a deep, eye-opening discussion to get involved. “There aren’t many opportunities that allow our hearts to open up in the way that we’re trying to embrace. I just encourage everybody to take the opportunity to be a part of it.”

While the 100 dinners project is about race, he says the initiative will address other issues around equity in Los Angeles in the future. “EmbRACE L.A. is about sexuality and gender and race and class and things that often tend to pull us apart, which we know really are commonalities and strengths that make Los Angeles so great.”

Retana is excited about the upcoming dinners, but he’s also looking farther ahead. He asks, “The Olympics are in 2028, so how can we as a city be in a much better position to celebrate equity, diversity, and justice than we were in ’84 when the Olympics came the last time?” Then he answers his own question. “I see EmbRACE L.A. as a part of several initiatives we have to take on as a city to be the kind of city we want to celebrate in 2028.”

Want to join one of the dinners? Apply on the EmbRACE L.A. website by Saturday, April 7.

RELATED: This L.A.-Based Artist Wants You to Consider Your Immigrant Status