Home Politics In Four Big Local Races, It’s on to Round Two 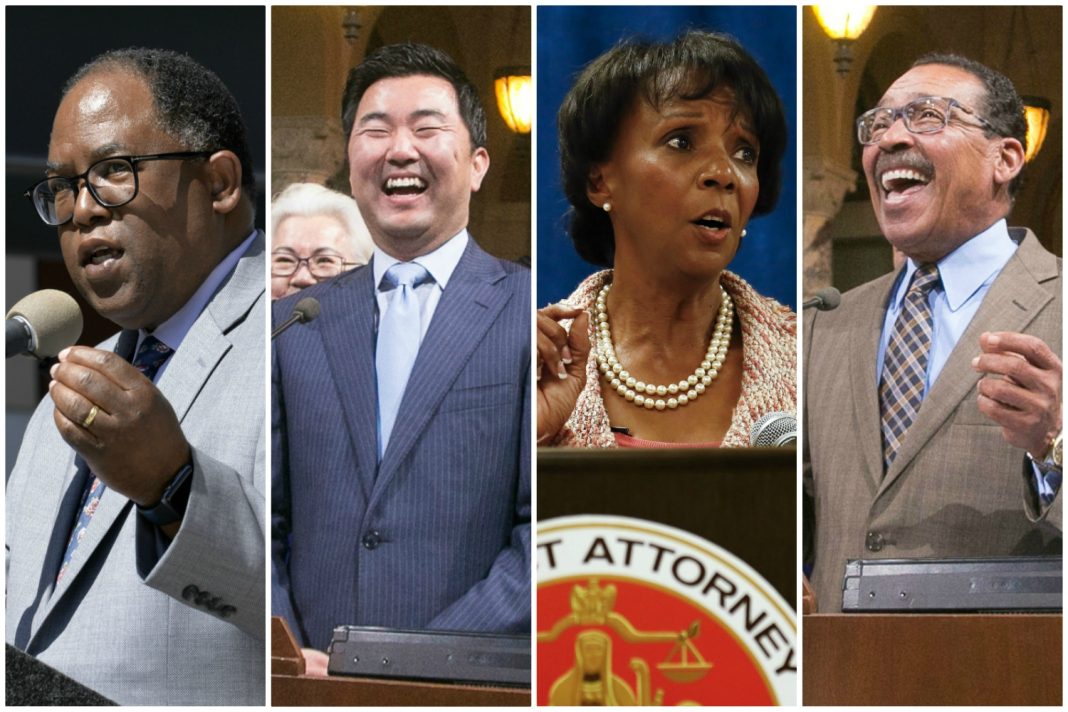 Election day in California feels like a lifetime ago. When people hit the polls on March 3, coronavirus prep consisted mostly of washing hands, and there was no social distancing as Angelenos waited in sometimes hours-long lines to vote. There were few concerns about casting ballots on tablets that had been touched by hundreds of fingers.

Finally, nearly a month later, the winners and losers are official. On March 27, L.A. County Registrar-Recorder/County Clerk Dean Logan certified the results. A total of 2,122,469 ballots were tabulated in the county, which means turnout was just 38.5 percent.

The completion of counting provides some clarity, as incumbent L.A. City Council members Paul Krekorian, Nury Martinez, and Marqueece Harris-Dawson all coasted to re-election, while District 12 officeholder John Lee narrowly defeated Loraine Lundquist (Lee likely benefitted from news of the indictment of his former boss, Mitch Englander, breaking six days after election day). Meanwhile, Kevin de León bested four challengers and will fill the District 14 seat when Councilman José Huizar is termed out at the end of the year.

However, in a quartet of key contests, no candidate earned more than 50 percent of the vote, and now the top two finishers in those races will move on to a November runoff. Here’s a rundown of the races that will continue for another seven months, and what to expect.

The most-watched race in the region involved District Attorney Jackie Lacey, who was seeking a third term atop the country’s largest prosecutor’s office. As a swell of progressive district attorneys were elected to positions across the country, Lacey was seeking to rebuff a pair of candidates who were running well to her left. Then, on March 2, in the greatest head-smacking moment of the current election cycle, Lacey’s husband David pulled a gun on Blacks Lives Matter protesters who had gathered on her porch.

Lacey almost won outright, but in electoral politics “almost” gets you nothing. She grabbed 48.65 percent of the vote and will now take on George Gascón, the former San Francisco D.A., who finished with 28.2 percent. A third candidate, Rachel Rossi, received 23.1 percent.

Lacey is likely the early favorite, but this could go either way.

There are compelling cases for each candidate to finish first in the runoff: Lacey supporters will crow that she crushed Gascón by more than 360,000 votes (approximately 869,000 to 504,000) and doesn’t need much to surpass 50 percent. With the power of incumbency, the support of most of the local political establishment, and the ability to cast Gascón as an opportunistic carpetbagger trying to come back to L.A. after a decade away (he had previously been a higher-up in the LAPD), she has a clear path to victory.

Gascón backers will counter that an incumbent who fails to win in the primary is in trouble, and that Rossi was even more progressive than Gascón, and thus nearly everyone who voted for her last month will likely now support him. Plus, a ballot headlined by Biden v. Trump could lure even more Democratic party voters aligned with his reformist vision.

Expect huge amounts of money to be dropped on the race. Lacey is likely the early favorite, but this could go either way.

With Supervisor Mark Ridley-Thomas termed out after 12 years, seven candidates ran for the powerful post—each of the five county supervisors represents 2 million people and weighs in on a budget north of $30 billion a year.

Most observers considered former City Council President Herb Wesson the prohibitive favorite—he boasted nearly 15 years on the council, a battalion of endorsements, support from a swath of labor groups, and the biggest fundraising war chest.

Wesson finished first, but with just 29.9 percent of the vote—meaning, seven of every 10 voters picked someone else—he’s on wobbly ground. He advances to the runoff against state Sen. Holly Mitchell, who grabbed 29 percent.

If Mitchell wins, all five members of the Board of Supervisors would be women, a historic achievement.

Don’t count out Wesson. He’s among the savviest politicians in the region and is certain to garner big-bucks support from those he has worked with in his decades-long career. He’s a fighter, and just because he underperformed in March doesn’t mean that he’ll fall in November.

That said, his road will be rocky. Mitchell’s team will tout her experience with matters ranging from a huge state budget to social equity, and will remind voters that Wesson worked closely with council members who are now being swept up in an ugly public corruption investigation. Wesson’s past personal financial travails will also be frequently mentioned.

A lot of votes are up for grabs—more than 40 percent of those who hit the polls in March picked someone other than Wesson or Mitchell. Also worth noting: If Mitchell wins, all five members of the Board of Supervisors would be women, a historic achievement.

Sitting L.A. councilmembers almost never lose an election. The last time it happened was in 2003, when Antonio Villaraigosa, who had huge name recognition from a run for mayor two years prior, knocked off District 14 rep Nick Pacheco (Villaraigosa would trampoline from the council to the mayor’s office in 2005). Usually once you’re in, you’re golden for 12 years.

That may not be the case for David Ryu, who earned less than 45 percen of the vote in last month’s re-election bid. He’s on to a runoff against Nithya Raman, a former employee of the City Administrative Officer who also recently helmed the women’s rights organization Time’s Up Entertainment. Although Ryu raised $1.04 million to her $268,000, Raman notched a stunning 41 percent of the vote; the final tally was 34,298 votes for Ryu, and 31,501 for Raman. A third candidate, Sarah Kate Levy, finished with about 14 percent, and her almost 11,000 supporters are up for grabs.

Ryu’s tepid finish is the kind of result that could lead some supporters to abandon him.

Team Ryu should be quaking as it seeks to understand how all the built-in advantages of incumbency were nearly felled by a political newbie who built a strong ground game and serious grassroots support. Ryu’s tepid finish is the kind of result that could lead some supporters to abandon him.

Then again, Ryu may benefit from the long period between primary and runoff. He has time to completely reshape his campaign strategy, and in recent weeks, as the coronavirus spread, he has sought to cast himself as a politician looking out for renters. Expect his phase two to be completely unlike phase one.

Also, don’t be surprised if mud flies as November approaches. Opposition research teams will be digging for dirt in the coming months.

The second half of a potential seat swap is also moving to a runoff: Wesson is termed out of his post, and Mark Ridley-Thomas is seeking to rejoin a council he was a member of in the 1990s. The political veteran galloped to a first-place finish, easily beating his closest competitor, attorney Grace Yoo. Yet with about 21,000 votes, Ridley-Thomas won 44.3 percent and fell under the 50 percent needed to avoid round two. He’ll face off against Yoo, who received 23.6 percent and about 11,200 votes.

Ridley-Thomas will be tough to beat.

The failure to secure a majority has to be a sore spot for Ridley-Thomas, who is one of the region’s most accomplished politicians. However, he likely faces less of a threat than the three first-place finishers mentioned above.

The five people in the race created a hurdle to the 50 percent barrier, and the third-place finisher, Aura Vasquez, made a pitch to progressive voters, and received about 21 percent. Yoo doesn’t have quite the overlapping audience that will automatically pull Vasquez supporters to her side. Additionally, Yoo may have a lower ceiling—when she ran for the CD10 seat against Wesson in 2015, she finished with 29.7 percent. In the current race she would have to more than double her first-round percentage, a tall task.

Yoo will strive to make Ridley-Thomas’ 2022 mayoral ambitions an issue, and assert that he might not be fully focused on the district—that could siphon votes from the bigger name. But Ridley-Thomas boasts a wide swath of achievements from his decades in public service, everything from police reform to getting major rail projects built—expect a revved-up campaign machine backed by big endorsements and labor support. He’ll be tough to beat.

RELATED: The FBI’s Shocking Case Against a Former L.A. Councilman Could Be the Tip of the Iceberg