Home Essays After a Year Like This One, L.A. Has Earned a Proper Post-Pandemic... 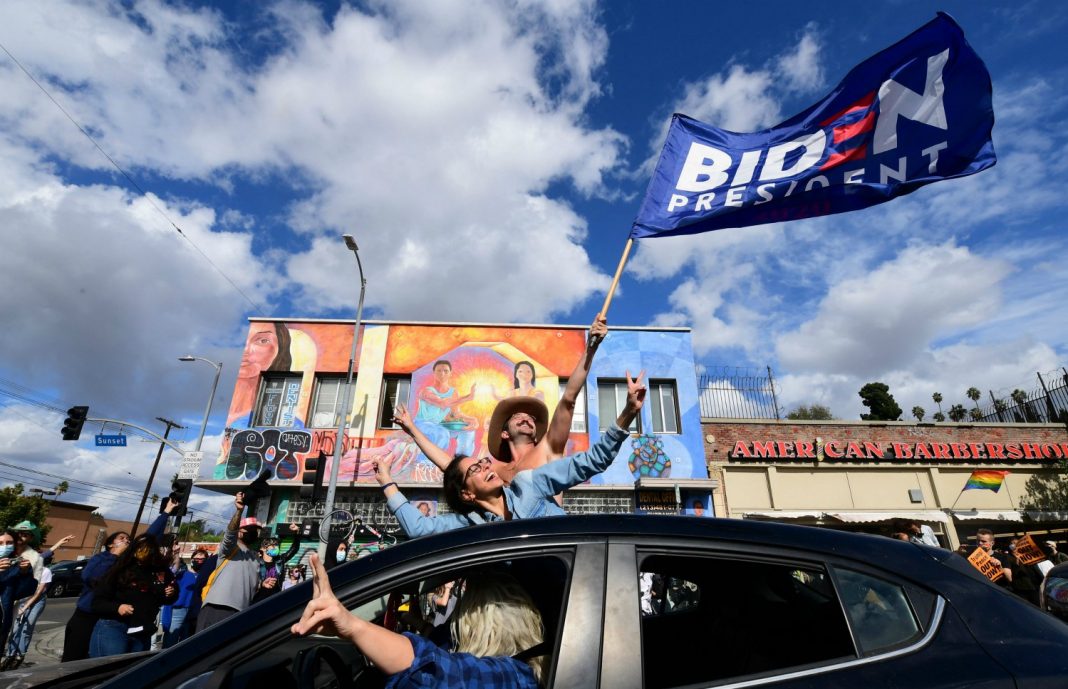 When the Lakers became world champions, my neighbor and I shared high fives and fuck yeahs.

When the Dodgers won the World Series, I yelled and danced alone in my apartment.

And when I got the call at 5:51 a.m. on Friday that the Pennsylvania vote total had finally flipped in Joe Biden’s favor, signaling the beginning of the end of four years of incompetent cruelty and tacky corruption, I was in the bathroom.

Don’t worry. I don’t answer my phone in the bathroom.

But later, when I was rocking the world’s greatest ever solo shower dance party (to Fleetwood Mac’s “Tusk,” which would’ve made for a grotesque inverse of that one dude’s TikTok and definitely the worst Ocean Spray ad ever conceived), the reality of Trump’s defeat and the shocking joy that comes with it started to hit me. I realized that I need a party. We need a party.

So on Saturday, when the networks finally called the race for Biden and Senator Kamala Harris and the rest of the world caught up with my celebratory spirit, I decided to try to do a little better. I went to my quarantine buddy’s house, we jumped in his car, put the top down and, like many other Angelenos, set out for a driving celebration through the city.

On Hollywood Boulevard, we laid on the horn and screamed at the top of our lungs with the guy in the Kia Soul next to us blasting Metallica’s “Master of Puppets” and singing along through a handheld mic while driving. Of course it’s L.A., so maybe that was just his normal Saturday morning thing, but I know damn well what the rest of us were honking and screaming for.

We headed east toward Franklin Hills, and people were honking and screaming there too. On Glendale, we turned around and away from the dark clouds and we sang “Midnight Train to Georgia” as loudly as we could. We cut over to Santa Monica Boulevard, feeling the energy building block by block as we neared West Hollywood, where we found an explosion of joy and relief, the marches of the summer turned to dancing in the fall as an uncharacteristically cold wind of change blew around the city.

It was fun. It was so much fun. It felt good to scream at the sky without questioning the reason of a divine being. It felt good to release some of the sadness and anger and fear and even happiness we’ve all been keeping inside, or at least behind masks this year. But it wasn’t enough. Not when you consider what we’ve been through. No, it wasn’t nearly enough. We need a real party.

Let me clarify: I’m not suggesting we actually have this party anytime soon. You’ll meet few people as COVID paranoid as I am. The reason I celebrated some of these big moments alone or from a moving car is because I don’t want to get sick, I don’t want to get anyone else sick, and I don’t give a shit if we just landed a human on Mars while defeating Nazis and curing cancer, but a great big fiesta is just too damn dangerous right now. Trumpism and COVID have teamed up to convince me for maybe the first time ever that I genuinely love people, so I’m not advocating for anything that might kill a bunch of them off. A hippie Sturgis isn’t going to do anybody any good except Mr. Undertaker.

I’m relatively new out here. I wrote about my first year here for this magazine, and I think it’s going to run after the last episode of the West Wing Slumber Party Massacre airs and people start thinking about something other than the presidential race. But one of the things I wrote about is how watching this city mourn Kobe Bryant revealed its heart to this newcomer.

The world had a tough year. It felt like L.A.’s was worse.And then, like the first days of spring, there was hope. It started with LeBron and A.D. and the Lakers. Then the Dodgers did what they’d come so close to doing for what seemed like forever. And then we helped defeat a tyrant and save America.

I know L.A. is not the uniformly liberal bastion it’s made out to be. I am well aware of the Red Hat population here, and I think we’re all realizing that Beverly Hills is to be regarded like that uncle on Facebook you used to think was kinda cool but whom you’ll now never look at the same way ever again. (A confederate flag?! Seriously?! You’re in fucking Beverly Hills!)

But like it or not, this, along with Portland and San Francisco/Oakland, is the unofficial capital of the resistance. We are the epicenter of freaks and weirdos and the monsters who dare to chase their dreams and wear their hair long. We don’t fuck with Mike Pence or people who call their wives “mother.” The new vice president is going to be the nation’s first woman vice president, first Black vice president, and first Asian-American vice president, and she’s coming from California. We have marched. We have fought. We have resisted. If the folks on Fox News, which, full disclosure, used to host me for political analysis, want to see a wild naked party of liberal heathens, well by God, let’s wait for the vaccine, administer it safely and freely, and then give it to ‘em.

Wins are rare and losses are abundant. In a year when so many have lost so much, it’s important that we take a second to pause and recognize the victories.

Now, I know I’m talking to some of the world’s greatest party people. Y’all are Hall of Fame, and I know many of you haven’t let a little thing like a deadly global pandemic and the possibility you might spread it stop you from partying like the world is going to end. And in your defense, the signs have sure been there that it might. Personally, I don’t get down like that anymore, end times or not. Like a lot of people in their 40s who use the words “used to” a lot, I used to howl at the moon. These days I prefer the porch, a joint and maybe a nice sitcom to stream, and I put on a mask to answer the phone.

But, buddy, the day is coming when I’m going to be right out there with the best of them. I am a new Lakers fan. I am at best a casual Dodgers fan. But I really, really love America. And when I learned early Friday morning that it looked like we were actually going to save her from a truly evil and truly dim-witted man, I wanted to celebrate. I’ve spent my adult life working in or around politics, including four years and two different presidents as a White House correspondent, and I can tell you wins are rare and losses are abundant. In a year when so many have lost so much, it’s important that we take a second to pause and recognize the victories.

And when that happens, well, you have to celebrate. Even if it’s just alone or in a car or with a small group of friends or out in the middle of the street with hundreds of people who are obviously invincible and doing that cool thing where they spin their car around. Find a way to celebrate. And when it’s safe, let’s remember what we’ve done. Let’s remember how we felt. And then let’s let it all hang out.

It’s a shame we have to wait, but I swear I think it’s going to be worth it. We had a hard year. We had a great year. And, someday soon, we’re going to celebrate both.

Sam Youngman is a former Washington-based campaign reporter and White House correspondent who now lives in Los Angeles and works as a political consultant.