Home L.A. History New Signs on the 10 Freeway Mark a Milestone for the Salvadoran... 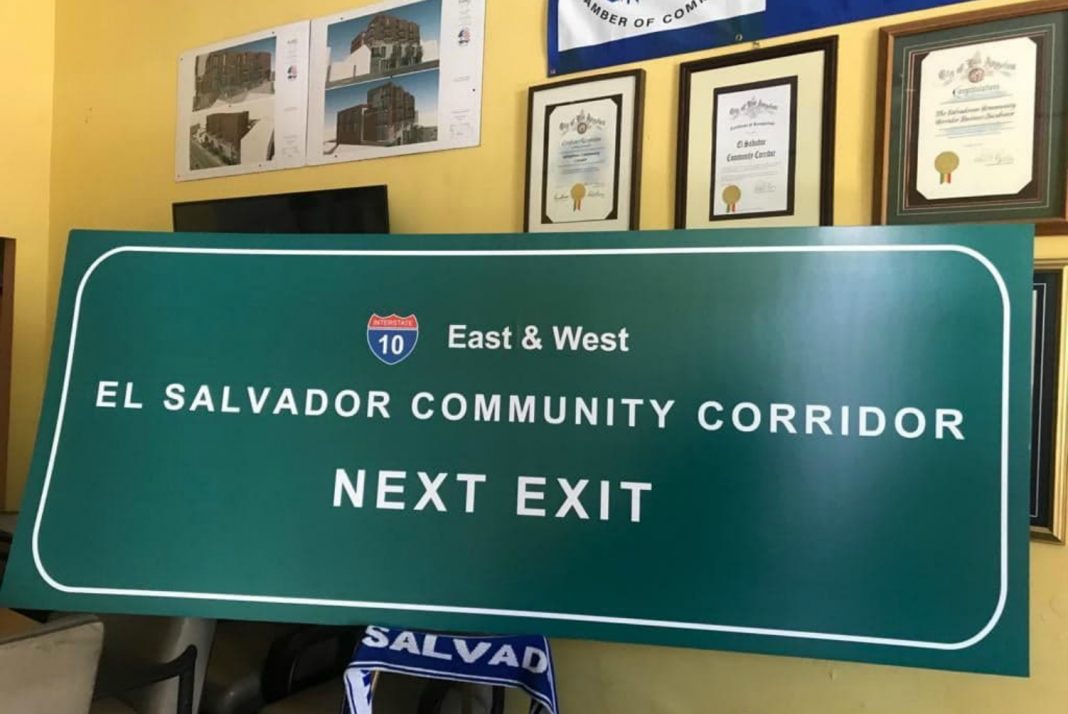 Los Angeles is home to the country’s only official artery that celebrates Salvadoran culture—but unless you were driving through, you’d probably miss it. In 2013, the 12 blocks of Vermont Avenue from 11th Street to Adams Street were officially christened the El Salvador Community Corridor. Now, six years later, two green-and-white signs are being installed on the 10 Freeway to make it easier for passersby to navigate there.

Even though the Salvadoran community has largely settled in Pico-Union and Westlake, around 30 years ago Vermont Avenue became attractive to Salvadorans for one reason alone: banks.

Banks like Banco Agricola, Banco Cuscatlan, and Banco American Central were crucial for Salvadorans who wanted to send funds back to family in El Salvador. Over the decades, parts of Vermont Avenue became a center for the Salvadoran community when street vendors, meat markets, and restaurants followed the crowds of expats.

Oscar Dominguez, founder and president of El Salvador Community Corridor believes that the corridor has given Salvadorans a place in the city and that the new signage will motivate Angelenos to visit the artery and support one (or more) of the 150 Salvadoran businesses located there.

“It will motivate any people who pass [by the freeway signs]. More than a million vehicles pass through there and they will be seeing the name of our country. And they will be able to exit and maybe want to go to a restaurant… and they will also be able to know our culture. For us, this is something historic and important for the community,” Dominguez says.

The push started when Dominguez and a team of Salvadoran entrepreneurs and business owners organized and lobbied to pass a measure to recognize the designation of the neighborhood. They followed up that effort with rounds of fundraising to cover the cost of the signage.

In honor of the occasion, the El Salvador Community Corridor will host an inauguration and festival on September 21 and 22, a week after Independence Day is celebrated by El Salvador and other Latin American countries. The celebration will include music, traditional foods, games, health resources, Latin-American celebrity guests as well as non-profits offering services useful to the community.

“This area is an area of progress,” he says, adding, “There is so much work to be done.”

Dominguez already has his eye on future initiatives for the corridor, including a farmers’ market, a plaza, a housing center for retired Salvadoran seniors, and even a museum. “In this country, the president says we are criminals,” Dominguez says. “What we really want, is to be known for being fighters.”

Festivities start Saturday, September 21 at 9 a.m. and go until midnight, and continue on Sunday, September 22 from 9 a.m. to 10 p.m. on the corner of Washington Street and Vermont Avenue. A special ceremony for the inauguration of the freeway signs will begin at 1 p.m. on Saturday.