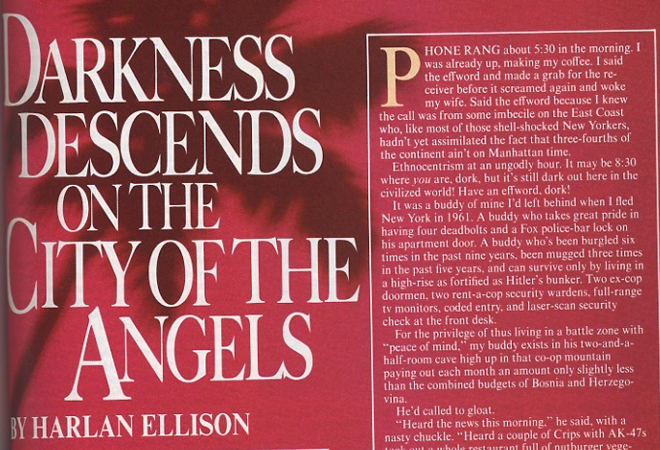 It seems, at times, as though our history has been nothing but a steady stream of psycho killers. Some crimes, however, because of their nature and the media, have changed the city and the way we live our lives and may say more about our society than any option poll or statistical analysis.

The body found in a vacant lot at the corner of South Norton and 39th Street turned out to be that of Elizabeth Short, a 22-year-old Hollywood hopeful. Neatly divided at the waist, the two sections of her body were found by a child on her way to school. The details, well reported in the press at the time, gave a glimpse into the darkest recesses of the human psyche.

The Assassination of Robert Kennedy – 1968

When Sirhan Sirhan shot Robert Kennedy, he changed not only Los Angeles, but history. In all likelihood, Kennedy—who had just won the California Democratic primary—would have wrestled the Democratic nomination from Hubert Humphrey and might have been able to beat Nixon in the presidential election.

Manson and his so-called family became the bogeymen of the ’60s. Manson was everybody’s bad dream: the acid-crazed killer leading a pack of zombies on random missions designed to precipitate a racial war. The sales of defensive equipment—gates, acorns and the like—skyrocketed after the Manson murders. He was probably the cause of more urban paranoia than any other person.

During six weeks of the summer and early fall, 10 women—nude, strangled and sexually molested—were found dumped in the Hollywood Hills. All over the city, women began locking doors, taking self-defense classes, buying Mace and doing everything they could to protect themselves. Kenneth Bianchi confessed to the crimes and implicated his cousin, Angelo Buono,Jr. Once again, the vulnerability of the lone woman was emblazoned in the city consciousness by daily headlines.

The indictment of five McMartin teachers on 109 counts of child molestation made headlines across the country. Charges against three of the accused have since been dropped, and there is some question about what did—or didn’t—happen. What is known is, the case opened a flood of molestation charges.

For months it seemed that every night there was another attack. He became the ultimate bogeyman, stalking us everywhere, raping and murdering from Orange County to San Francisco. The demand for weapons rose so quickly that gun stores could barely keep their shelves stocked. Since the arrest of Richard Ramirez on August 31, 1985, the Night Stalker has made no appearances.

The arrival of participatory violence. Between June and September there were 50 reports of shots fired on the freeways, mostly spurred by the kind of traffic insults we all give and receive daily. Five people were killed.

The population image of gangs as well-armed sociopathic youth is nothing new. But they were easy to ignore, isolated in small, impoverished pockets. When 27-year-old Karen Toshima of Long Beach was shot dead in gang crossfire on the streets of Westwood, everyone got the message: No place is safe.