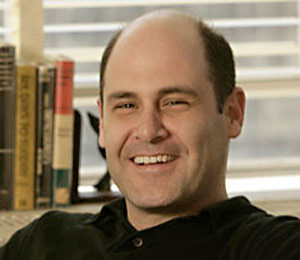 I had no idea until I interviewed Matthew Weiner, the creator of Mad Men, that many plotlines on the AMC show are so personal to him. After all, Weiner was born in 1965, and the show has only reached 1963. Last week, a few days before the third season finale aired (to its highest ratings yet), I sat down with Weiner at the Regal Cinemas that just opened downtown at L.A. Live. The magazine has started a new series in conjunction with Writers Bloc, the speaker’s forum that Andrea Grossman began in 1996 and has run so ably and enthusiastically ever since (she’s got Ruth Rendell and Barbara Kingsolver coming up, by the way). I was eager to get to the bottom of some of the show’s story arcs—I wrote about my Mad Men fixation in a recent editor’s note. Grandpa Gene’s death this season? Completely based on Weiner’s childhood memories of his own grandfather’s passing, a story he recounted that evening in heartbreaking detail.

Turns out that Weiner identifies with Don Draper—and Peggy, and Pete, and even Joan. The lovely Christina Hendricks, the terrific actress who plays va-va-Joan, attended the talk as well. She’s the second woman I’ve met from the show who in person looks so much younger than she does onscreen—the hairdos, that makeup, and those bullet bras put several years on a beautiful woman. You can read highlights from our interview here and see some video, too. Weiner was candid, telling one audience member, a budding writer who asked for advice on dealing with rejection: “You better learn to thrive on rejection. And you better dream of vindication.” He also spoke for the first time about why his name is on every script.

As for details about the fourth season—Is Betty really out of the picture? Will Don become Manhattan’s ultimate bachelor? Is Sally going to end up a Manson girl?—we’ll have to wait until the summer of 2010 to find out.