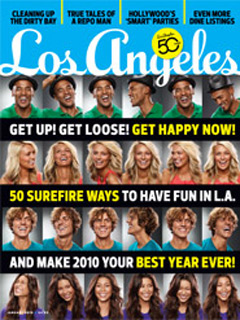 My first reason to look forward to 2010: It’s not 2009. In our January issue, which hits newsstands this month, we offer up a happiness package, chock full of suggestions for making the New Year a whole lot better than the last one. There are places to go that will make you smile in the issue, yes, but also life lessons and some practical advice (from people like Tom Kenny, the voice of SpongeBob SquarePants, on how to entertain a kid, and Annie Miller, owner of Clementine bakery in Culver City, on how to bake the perfect chocolate chip cookie).

The issue is our way to kick off Los Angeles magazine’s 50th-anniversary year. Yes, it’s true, time flies when you’re never off deadline. Each month we’ll be celebrating our birthday; in January we pinpoint the 50 happiest moments of the past 50 years in L.A. Look for commemorative photo-essays, oral histories, and a cover gallery of our greatest hits in future issues.

Also in this issue: writer Bill Sharpsteen on the battle to clean up Santa Monica Bay; photographer Dan Winters’s stunning portfolio of Southern California citrus; contributor Chris Nelson’s (his piece last year on the Metrolink crash still sticks with me) ride-along with a wild and crazy repo man; restaurant critic Patric Kuh’s review of Bistro LQ; columnist Anne Taylor Fleming’s admission that the McCourt divorce is the one event she feels compelled to publicly apologize for; film critic Steve Erickson’s look back on the magical career of Terry Gilliam; Cut! writer Gina Piccalo’s assessment of the celebrity salon; and writer-at-large Ed Leibowitz’s interview with actress Bryce Dallas Howard, who explains the wonders of growing up in a well-adjusted Hollywood family.

My first suggestion for a way to get happy right now? Check out our first Year in Review, in which staffers choose their favorite L.A. magazine stories from 2009.