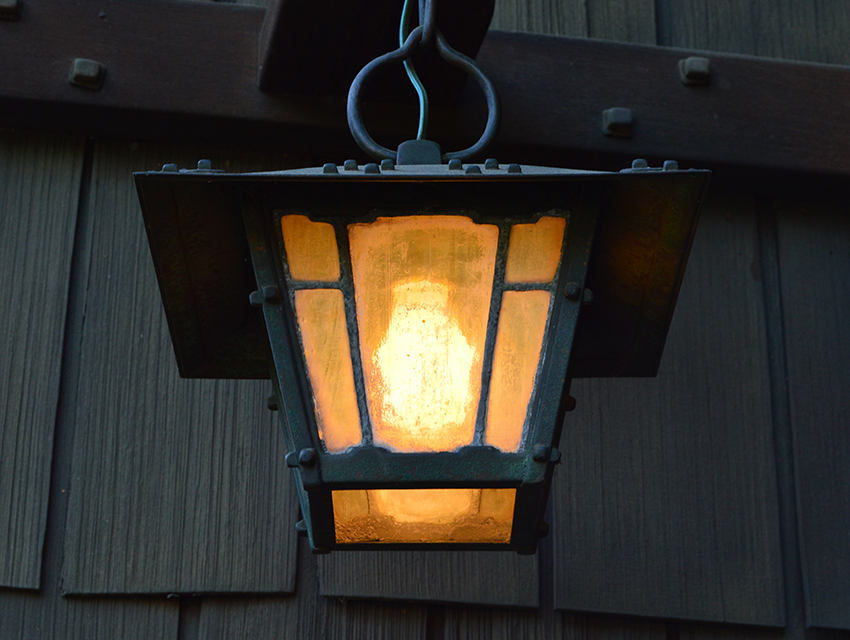 In the April issue, Steve Vaught tells the story of the Cora C. Hollister house, the work of early 20th Century architects Charles and Henry Greene. That house was bought by a family of adventurous go-getters, disassembled, and moved to rural Canada—but it isn’t the only Greene and Greene building with a past. Others have undergone moves, modifications, and odd changes of ownership, and you can see them yourself around the L.A. area, no passport needed. The only remaining Greene and Greene-designed apartment building, the Herkimer Arms shows off the brothers’ experimental use of spray concrete, or gunite. Like many Greene and Greene projects, the apartments came fully furnished—in this case with hideaway trundle beds and pull out desks. At the time it was built, Pasadena was becoming a popular place, and the Herkimer Arms housed visitors who weren’t in a hurry to leave. Later, the apartments served as student housing for Fuller Theological Seminary. Then, in 2009, the building was sawed in half , transported to its current location, and reassembled by Heritage Housing Partners. Originally eight units, it was converted into two four-bedroom units, each of which was sold as affordable housing to first-time home-buyers at prices between $375,000 and $400,000. The Kinney-Kendall building was designed only two years after the establishment of the Greene and Greene firm at a time when the young architects had yet to develop their distinctive style. It is one of the very few commercial buildings the brothers designed, and, of them all, the last one standing. At one point, the Greenes themselves had offices here. The building, which now houses the Crown City Loan and Jewelry pawn shop, was restored in 2010—and it doesn’t quite look like the original. That’s because in 1929 Colorado Boulevard was widened and 14 feet were shaved off the front of all buildings on the street. The structure’s front facade was then rebuilt in a different style from Greene and Greene’s original concept. At least a few elements within the iron and glass structure do remain the same, though, like the stairway and balustrade. The famous Blacker House is perhaps the most opulent of Greene and Greene’s ultimate bungalows—Blacker himself was immensely wealthy, and as a lumberman he enabled the Greenes to build with the choicest wood.

In 1985, the house was sold to wealthy Texas cattleman Barton English, who was known somewhat less than affectionately as “Black Bart” by local preservationists. Upon acquisition of the home, English disassembled decorative elements for resale and replaced them with replicas. In what has been referred to by preservationists as, alternately, “The Rape of the Blacker House” and “The Texas Chainsaw Massacre,” the Texan quickly made back the $1.2 million he invested in the purchase of the house.

When neighbors caught wind that English would be replacing the gorgeous front doors (valued around $330,000) with replicas, they literally patrolled the area to catch his workers in the act. A police officer even entered the house at night and found what appeared to be replicas of doors in the works. All efforts to prevent removal of the doors failed, apparently, because the original doors of the Blacker House are now on display at the Dallas Museum of Art. (As it so happens, though, Marty McFly found time to knock on the original doors before their removal; the house was used for scenes in Back to the Future.) In 1994 the home was bought by Ellen and Harvey Knell and was fastidiously restored. You were out jogging in Long Beach’s Belmont Park neighborhood and think you saw a Greene and Greene? No, that home is a clever look-alike created less than 10 years ago by Steve Weaver, owner of Weaver Builders Inc. Although three Greene and Greene homes are still standing in Long Beach, this masterpiece isn’t one of them. Weaver and his wife Marie helped architect Jeff Jeanette replicate the Greene brothers’ Arts and Crafts style down to the last detail. Imported mahogany? Check. Stained glass windows? Check. Exposed rafter tails? Check. Specially crafted copper light fixtures? Check.

Weaver now lives in another home he specially remodeled (this time the theme is midcentury modern) but his old home stands as a testament to the enduring appeal of the Greene brothers’ style. In fact, Weaver wasn’t alone in drawing inspiration from Craftsman architecture’s dynamic duo. Disney’s Grand Californian Hotel was also fashioned after Greene and Greene’s ultimate bungalows.